How do the collector and emitter terminals of a BJT operate when no power supply is present? 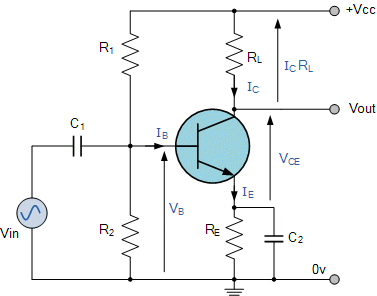 Let's consider the case in which power supply is not connected (so between VCC and GND there is an open circuit). What will I read at the output terminal? 0V (i.e. Collector and Emitter are short circuited when the transistor is off) or Undefined Voltage (i.e. Collector and Emitter are separated by an open circuit when the transistor is on)?

I have also the same doubt about MOSFET transistors.

I'd say that, since the material between collector and emitter is a semiconductor, it acts like a "mean" resistor (not open circuit but also not short circuit). So I'd say that without power supply, the output of the amplifier is 0. Is this reasoning correct?

The resistors RL, R1, and R2 connect the output terminals, so if the input signal amplitude is small you'll read 0 V DC between them. If the input is strong you may see a DC offset due to rectification of the input by the b-c junction.

Are you applying Vin still while Vcc is open? You'll measure a high-passed version of Vin through the resistive connection from the base to Vout (R1 + RL).

It will be 0V, due to the leakage current of the (N)PN junction (and, as The Photon remarks, the current through RL/R1/R1, although it would still be 0 without these)

The best answer will be to simulate with VCC=0V and the likely range of input voltages and any potential signals from other sources on the output.

You have to recognise that, absent power, you have two diodes present on the input side, and one on the output side.

Potential effects from these include:

Rectification, non-linearity, distortion of input signals which may be shared with other amplifiers. I had to take care with an audio PPM (peak program meter) that when unpowered, it didn't distort signals on a broadcast circuit any more than 0.1%. In an RF environment, strong interfering signals may mix to produce spurious noises on other frequencies.

Rectification, non-linearity, distortion of externally applied signals on the output side (if any).

If the input is at the 1 mV level these won't happen. But if it peaks anywhere close to 0.6V the circuit may behave in unexpected ways when unpowered.

With VCC floating, there is a resistive path between input and output.

And the Cob further obliges the collector to track the base movement.

Not the answer you're looking for? Browse other questions tagged operational-amplifier transistors circuit-analysis bjt semiconductors or ask your own question.