Simple curve to illustrate how much current it takes to turn on a PN2222 transistor?

It's been about 30 years since I studied transistors so please forgive my basic question.

I bought my kid an Arduino kit to give him a basic taste for how electronic circuits work. Included in the kit was a couple of PN2222 transistor. Not having a large potentiometer, I set up the following circuit, using all the large value resistors that came with the kit: 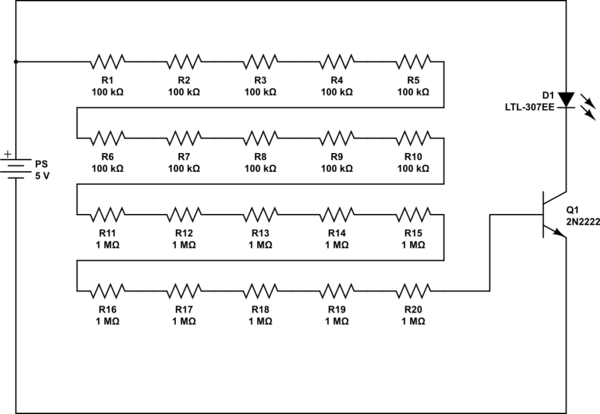 With a jumper, I can crudely vary the current flowing into the emitter. I was very surprised to see that 10 100K resistors were not enough to turn the transistor off. I was even more surprised that and additional 10 1M resistors were not enough to shut it down, though the LED was very dim. I was also surprised to learn that the transistor consistently dropped around 3V no matter how much current was coming into the emitter. I have forgotten a lot, it seems.

I looked at the technical specs for this device that shows some plots but I honestly couldn't make heads or tails of them. How do I figure out how much resistance it will take to turn the transistor off?

And does anyone know of a simple curve that can help illustrate how the transistor is behaving in relation to the changing resistance on the emitter? 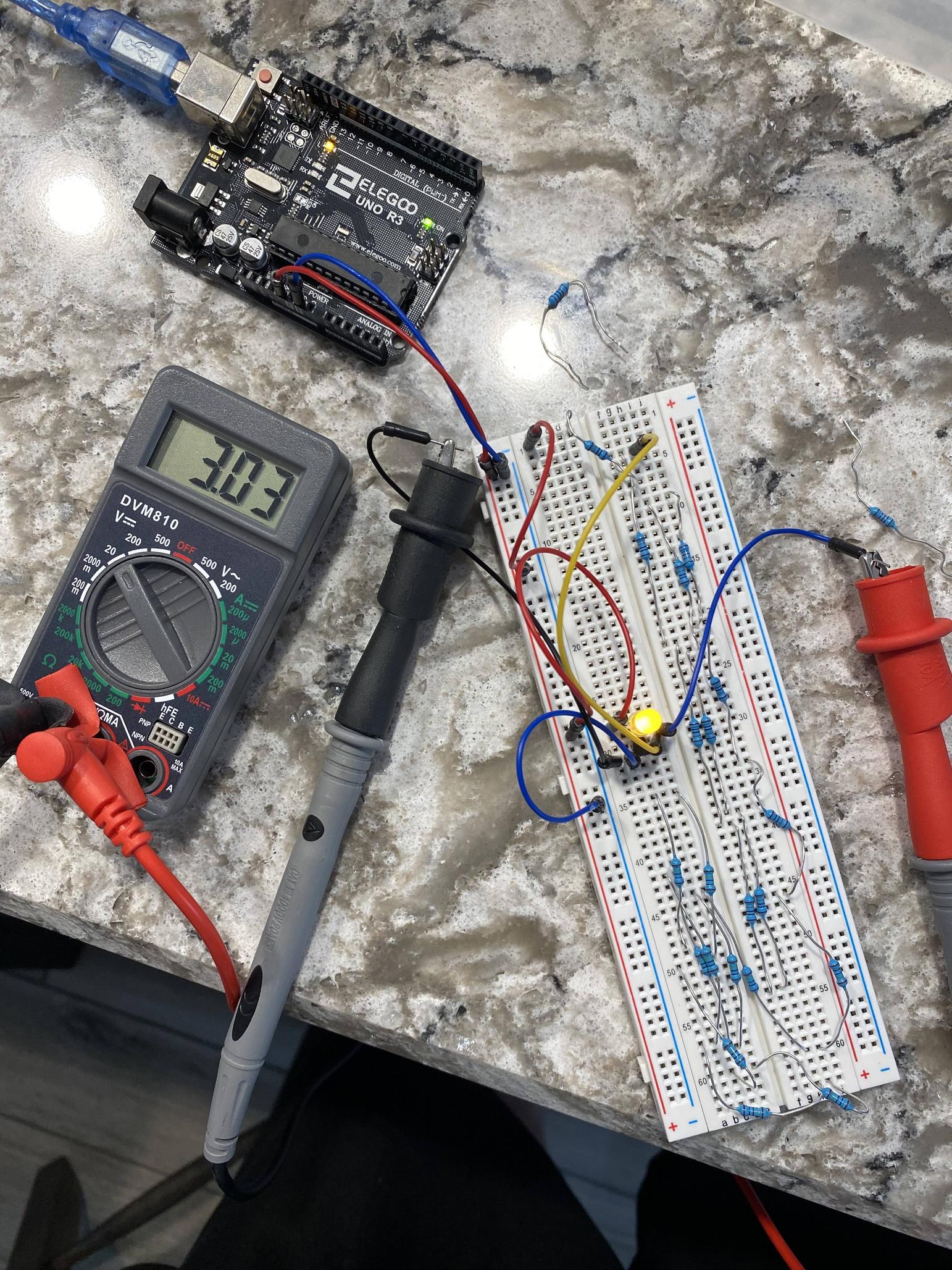 You ask for a simple curve to illustrate how the circuit is behaving. I can give you two. (I drew them by hand after running a simulation with a 2n2222A and a 2.1 LED to get coherent values).

The first curve shows how the BE diode responds to the current set by the Vcc - Rb circuit. Plot the diode characteristic alongside with the load line (basically the characteristic of the battery plus resistor, duly translated and flipped to consider that the current coming out of one port is the current getting inside the other port) and you will find the quiescent point at the intersection of the two curves.
Since the load line intercepts the current axis at 5V / 10 meg = 500 nA, you should expect less than that current through the BE diode. And in fact the the BE diode will work at less than 0.6V.

the current in the BE diode, with RB = 10 meg, is about 440 nA. You'll notice that by increasing RB the load line moves toward the horizontal axis pivoting aroud the VCC point, so the intersection with the BE diode characteristic will move toward lower voltages and lower currents.

Now we use the same trick on the output part of the circuit: there you have the CE terminals of the transistor 'interfacing' with the Vcc-LED circuit. Since IB is known to be 440nA, we know which one of the many curves of the transistor use (IC = beta IB - the simulation picked that for Ic = 60 uA).
You use the same load line trick, translating and flipping one of the two one-port characteristics (in this case I flipped the Vcc-LED part) and you find this

As you can see, you are near the knee part of the LED, but you still have enough current - about 60 uA - to make it look lit. And even if you raise RB, you will still be in a region where the current in the diode is not zero. Not even for IB = 0 you can take the current to exactly zero, because there is a minimum leakage current.

Using load lines helps in visualizing what's going on in the circuit: you raise RB, the input load line goes down, IB goes down and so IC but the intersection is still in a region with ILED > 0. From the simulation 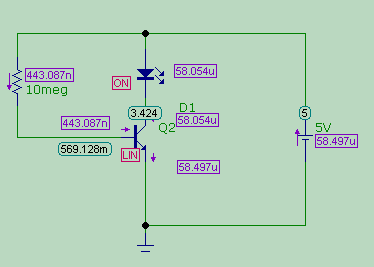 it is clear that your LED is underpowered - only 1.6V instead of the nominal 2.1V. But with modern LEDs that's more than enough to get light out of them.

Caveat emptor - do not rely too much on load lines for designing a circuit because the characteristics can vary enormously in a single production batch and are temperature dependent.

If you look at the datasheet for your transistor you will certainly see graphs of collector current vs. base current, and base voltage vs. base current. You should note that the transistor is not like a toggle switch...there is no sharp threshold where it turns "on" and "off".

In your circuit, the voltage across the LED will be about 2V when it is forward biased so you should expect about 3V from emitter to collector on the transistor. What this means is that about 60% of the power consumed by your circuit is consumed by the transistor, which might cause it to become hotter than you desire.

2N2222 may have a gain of over 100. Take whatever current you have going into the base and multiply this by 100 so see approximately how much current will be pulled in by the collector.

50 µA is enough to see in a modern LED. You could be getting even more than this.

I know the following may look "a little complicated," but it's not that bad. Let me present it and explain it a bit, first. But it is a very rough model of the NPN BJT when it is operating in active mode: 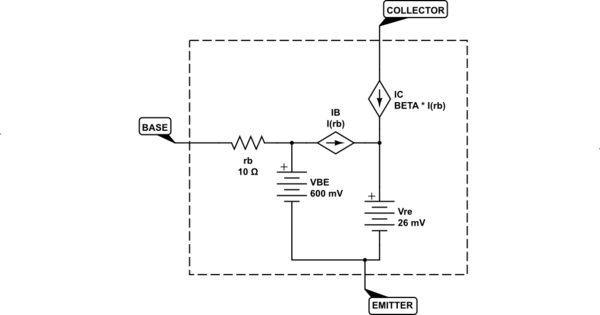 I've included a small base resistor, as this is pretty typical in small signal BJTs. Usually, you don't even need to worry about it as the base resistor you place externally is almost always a lot bigger.

I've also included a tiny little battery near the emitter. If it helps you, just bypass it in your mind with a wire. It's not critical. I just added it because it represents the thermal voltage which varies with operating temperature. At room temperature, it is about \$26\:\text{mV}\$. All of the base and collector currents (which are the emitter current) pass through this little battery. And sometimes you may read about a so-called "dynamic resistance" of a BJT. If so, that's this little battery voltage divided by the emitter current and it's called \$r_e\$. So, in some cases, folks will place \$r_e\$ instead of the little battery I show. But they are one and the same thing. Just FYI. But don't let it confuse you, either. It's effect isn't important in your case.

Now, one more small detail to add. The LED itself also will have small variations in its voltage drop with respect to current in the LED. But like the base-to-emitter case I mentioned above, a factor of 10 change in its current will only lead to perhaps \$100\:\text{mV}\$ to \$150\:\text{mV}\$ change across it. So it doesn't change its voltage, much. Just a little -- even when huge changes in current take place. So the collector voltage will move around a little bit, but not a lot, as you play around with the base resistors in your experiment.

Most modern small signal BJTs will have \$\beta\ge 100\$. When I run through batches of them and from different families too, I usually find \$120\le \beta \le 280\$. We don't know what you have, of course. But it's probably somewhere in that range.

All that this means is that when you supply different base currents via your resistor experiment changes, whatever that value is will be multiplied by that \$\beta\$ value and become a collector current -- which also will happen to be the LED current, too. (For reasons that should be obvious.) In short, the LED is pretty much always "on" to some degree, with the degree of "on" being related to that calculation.

If you want to turn it completely off, you'll need to nail the base down close to zero volts (say, below \$500\:\text{mV}\$.) Any more positive voltage will supply sufficiently useful base current into the base to make for a likely-visible collector current because of the \$\beta\$ value multiplying it.

Continue your experiments, for example, but first by adding a \$10\:\text{k}\Omega\$ resistor between the base and the emitter in your circuit. This will create a divider and will allow you to present smaller voltages to the base -- enough smaller, in fact, that you'll be able to turn it off, completely, during your experimentation.

Not really an answer but a personal comment:
In material science, base current is due to the leakages and the re-combinations. It is an illusion/approximation that the base current controls anything. It is always about the subtle change of Vbe, which in turn is intertwined with Ic, very similar to the voltage and the current thru a diode. In a way, BJT is a BaseEmitter diode with collector being the avalanche region that will take everything the BaseEmitter passes on.

A very good insight, just 1 min long watch:
Key understanding of a PN junction: https://youtu.be/O_ntPMM0EQA?t=2165
BJT is in reality voltage controlled: https://youtu.be/KcTlDFAGkJI?t=1937
Follow the rest of the lectures to understand why Ib is NOT controlling anything.

0
Why does an LED always need a resistor?

2
Is this switch circuit correct?
0
S8050 D331 base resistor calculation
1
Calculating base resistor - PN2222
1
Controlling which transistor turns on first in a multivibrator
0
Why doesn't current flow in the other loop?
2
NPN Transistors Not Working When Emitter Is Grounded
0
How to amplify 3.3V to 10V by using an NPN transistor? How to select resistor based on current, how does the amplification happen?
1
Long-tailed pair LTspice simulation
0
Can i replace an old transistor with a pn2222?