What is the phase of the impedance at each point on a resonant center fed half wave dipole?

Everyone knows that for an ideal center fed half wave dipole operated at resonance, the impedance at the center is 73 + j0 ohms.

The graph below is very common and shows how the impedance Z at any point on the antenna is E / I at each point. Notice how Z is between 73 ohms and 2500 ohms with no mention of the value of reactance in the impedance, even though AC impedance has a real part and an imaginary part. 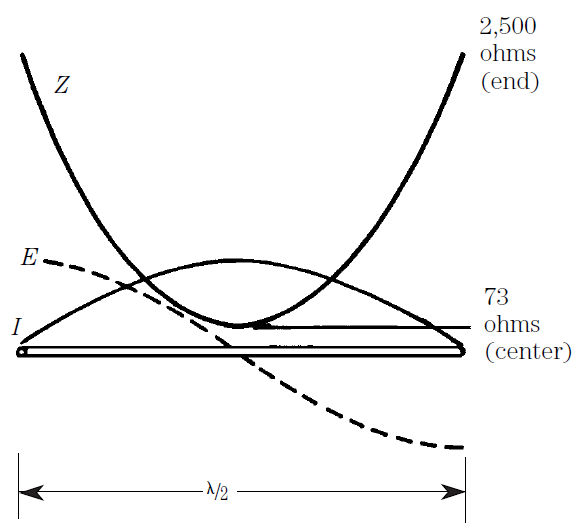 What's the value of the reactance in the impedance at all the other points on the antenna ?

The answer that i'm not looking for is that the reactance is zero everywhere on the antenna because it's resonant, but if this is true someone please explain why before i die of brain damage :(

After all this time no one has provided a sensible answer to this question so after some investigation i've answered it myself.

The graph appears to show a snapshot in an instant of time of the voltage and current of the standing wave on a 1/2 wave dipole when the current is at a maximum, along with the resultant impedance Z.

The graphs confuses the reader in the following three ways.

To clarify, voltage means the single ended AC RF voltage potential in volts present on the antenna element with respect to earth or zero volts, and current means AC RF current flowing through the antenna elements in amps. Voltage and current could be specified in peak, peak to peak, average or RMS, so long as the same units are used in the one context.

In truth the graph is showing the correct distribution of the voltage and current of the standing wave on a 1/2 wave dipole, however the impedance Z it depicts is actually the real part of the feed point impedance which would be present across two feed points terminals positioned along the various points along the length of the dipole elements.

I contacted the author of the animation in Wikipedia and managed to convince him to update the image, although the text in the article still doesn't explain the relationship between feed point impedance, and phase of the source and standing wave of a dipole antenna.

Everyone knows that for an ideal center fed half wave dipole operated at resonance, the impedance at the center is 73 + j0 ohms. 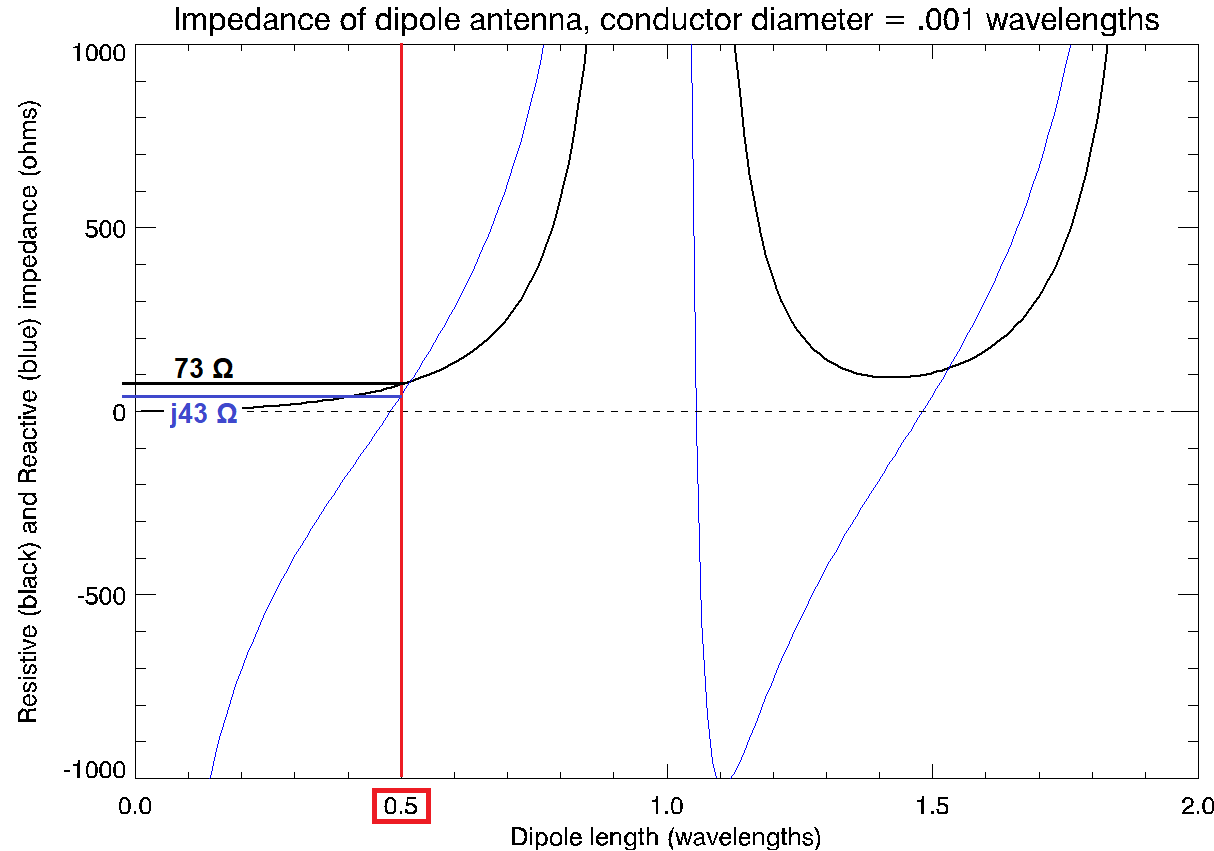 Note that I've added on the vertical red lines and the horizontal blue and black lines that show the resistive and reactive parts of the impedance at exactly 0.5\$\lambda\$.

A true half-wave dipole is one half of the wavelength λ in length, where λ = c/f in free space. Such a dipole has a feedpoint impedance consisting of 73 Ω resistance and +43 Ω reactance, thus presenting a slightly inductive reactance.

At slightly below the half-wavelength length of the input signal, the impedance will be truly resistive but at the ideal 0.5\$\lambda\$ point it's got significant reactance.

2
Dipole Antenna as Receiver
3
Difference between antenna resistance and impedance
1
Calculations: Antenna specs; SWR, Bandwidth, Rad.Eff, Q-factor
1
How does "slightly" altering the physical construction of an antenna change its impedance?
0
When deforming a resonant circuit into an antenna, why can we cut the inductor in half?
0
Characersitics of a traveling wave on a half wave dipole antenna
0
More on standing waves in a dipole antenna
1
Is the phase difference between the voltage and current of the standing wave on a dipole antenna constant along the dipole's length?
0
Why do ham radio operators say that a full wave dipole isn't resonant?
0
Interaction between half wave dipole and power supply lines in 433 MHz RF module