Is it possible to safely double the current limit using 4 bridge rectifiers? In one forum I found someone wrote:

Use four bridges, one for each leg. Tie the AC input (cathode to anode) connections across on each bridge. This now makes a single equivalent diode, at twice the PIV and current. Two diodes in series; two in parallel.

I tried to draw a schematics to these instructions but it doesn't make sense to me how it can work.

In most cases, paralleling diodes is not a good idea. Their forward voltage drops Vf can be different, if they are not from the same batch. As a result one diode with the lowest Vf in the bank will conduct more current than the rest and more than it's rated for. That diode will get burned. Then the next one will get overcurrent in the same fashion. Untill all of the parallel diodes in the bank are burned. I'm afraid that the quote in the O.P. is describing this [wrong] approach. 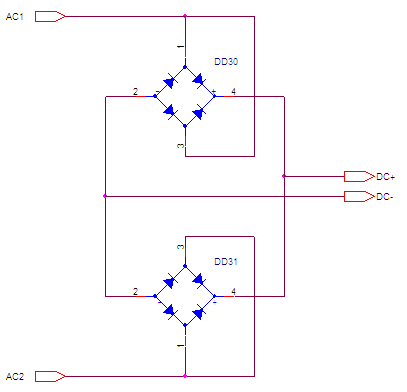 Notice that there are parallel diode connections within the bridges, but not between the bridges. No more than 2x bridges can be paralleled this way.

Proceed with caution. Best of all, just get a single bridge with sufficient current rating.

The effective PIV rating will be 200% if the leakage currents are matched and thus share the PIV. There are no tolerances on leakage, so no guarantee.

The effective current rating will be 200% if the ESR is identical in both bridges if the ESR are identical. Unfortunately this too is not tolerance and only Worst case is given.

The real problem is due to the Shockley voltage thermal effect being an NTC. As the lower ESR shunts more current and gets hotter and net power dissipation rises further hogging current. Close thermal matching can be done to alleviate this but then it comes down to staying below the current level that causes thermal runaway. This threshold depends on mismatch and a ratio of Rja and Resr and is not easily calculated only by statistical results.

Since there are no guarantees on doubling and good reasons for mismatch in manufacturing tolerances. It only gives some margin if you are planning on operating near the spec of one and two such devices costs too much more than one with double PIV and double current. It is better to get 5 quotes on different parts and improve costs than try to get uncertain margin here to save a bit.

Not the answer you're looking for? Browse other questions tagged rectifier bridge or ask your own question.

2
In this project, where does the rectifier go?
1
What size bridge rectifier do I need to convert 12V AC to 12V DC with 200watt load?