I'm working on restoring an HP 211A square-wave generator and I'm looking to add a shielded cable to the 600 ohm output. I've got some spare 75 ohm RG59 cabling and I was wanting to know if using that would have any detrimental effects on the output such as signal loss due to the impedance mismatching. The length of cable will be 10" - 12", the output will be between 1Hz and 1MHz and mostly used on loads like oscilloscopes and maybe stereo receivers.

To clarify, the RG59 cabling would run from the V10 and V11 plates to the wiper on R71, and then another cable from the non-grounded pin of R71 to the output screw post. I'd likely use 75 ohm cabling to run to any devices on the output though anyways. 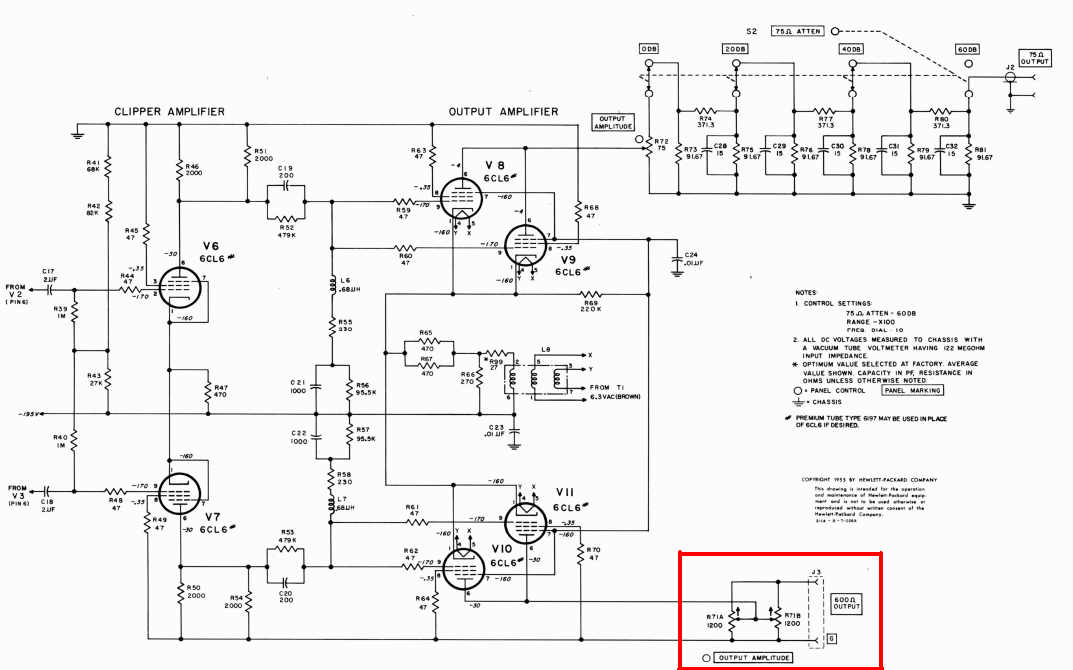 If I searched right, the unit has a maximum output frequency of 1MHz. A 1MHz wave has 300m wavelength in free space. It will be slightly longer in a cable. So the cable you will use, will be electrically short for sure, and only the capacitive loading of the cable and thus the bandwidth is to be assessed. Such a coaxial cable should have roughly 100pF/m capacitance. 600Ω output resistance and 100pF forms a pole at 2.67MHz, so you are good* up to 1m cable length for the full range of the instrument. If you want a 1MHz frequency with a waveform including harmonics, then you should reduce your cable length, or the output impedance before the cable.

*Only 6% amplitude loss for a 1MHz sinusoid signal

At the frequencies your using there is little effect in using a lower impedance cable. However you will want to terminate it with a 600 ohm load so the source can still drive it at full voltage.

Frequencies at or above 50MHZ are very fussy about impedance matching and standing waves and you are nowhere near that high in frequency.

600 ohms is typical for audio < 0.01HZ up to 1MHZ. That is the range of my 600 ohm analog audio generator. 1MHZ to 10MHZ for ultra-sound is common today, so 10MHZ is nothing special anymore.

You do want to avoid cable with an impedance above 600 ohms, as this could deform the edges of frequencies approaching 1MHZ (for square waves).

Cables lower than 75 ohm become a "bulk" problem as the center conductor can be thick, making the cable tough to bend. Avoid 50 ohm and 25 ohm cables for this reason, and their higher cost.

For a "cleaner" square wave at 1MHZ you can load the end-point with less than 600 ohms, by going down a 100 ohms at a step, but the signal amplitude will drop. You have to decide if signal amplitude is more important than signal quality.

RG59 Coax is 75 Ohms and as I recall 30pF/ft. Twisted pair impedance and pF/ft depend on twists /ft. The fewer twists, the higher the impedance and inductance must be considered as well.

It becomes a matter of tradeoffs whether you have rounded edges or ringing or attenuation with properly matched RC impedance divider like an 8:1 to 75 Ohms or unshielded wire prone to magnetic pickup or lightly shielded twisted pair with large twists.

600 ohm is unrealistic; needs center conductor about the size of an atom, shield with diameter of the universe, from what I heard.

Use the 75 ohm; you are not expecting standing waves, so don't worry.

Not the answer you're looking for? Browse other questions tagged audio frequency impedance cables shielding or ask your own question.