Why is the MOSFET driver in this circuit dying?

This circuit kills the driver (an IR2104s) when under normal conditions.
Bat+ goes to a 12V lead acid battery.
In+ goes to a 20V laptop power supply, though it is intended to be a solar panel instead.

The circuit takes Vin, passes it through a SMPS with two MOSFETS (driven by the ir2104 that dies) and into Bat+. The LM321 is just a latch that allow the MCU to control and read the ir2104). The connector in the left comes from the MCU, the right one holds the power lines. PWM(PWM signal for the 2104) CS (current sense pin, for safety -it can stop the ir2104-) SHDN (a shutdown signal)

Using a purely resistive load instead of the battery works. Then the battery is connected and the driver gives up. The MOSFET doesn't die, though. This using a current-limited (to 30mA) power supply.

There is a power regulation loop (that feeds the PWM that goes into SMPS_PWM) which is not really good or responsive (it is a very simple ramp algo), but even then, why would the driver die?
My guess is that there's a voltage that goes too high in the wrong pin, but how or where?
One running theory is that, if the PWM were to be 100% you'd have an upper MOSFET that's permanently closed, and that'd be a problem, but I don't see why? (and sure a 100% duty cycle won't work in a charge pump driver, but that should affect the MOSFET, not the driver...) 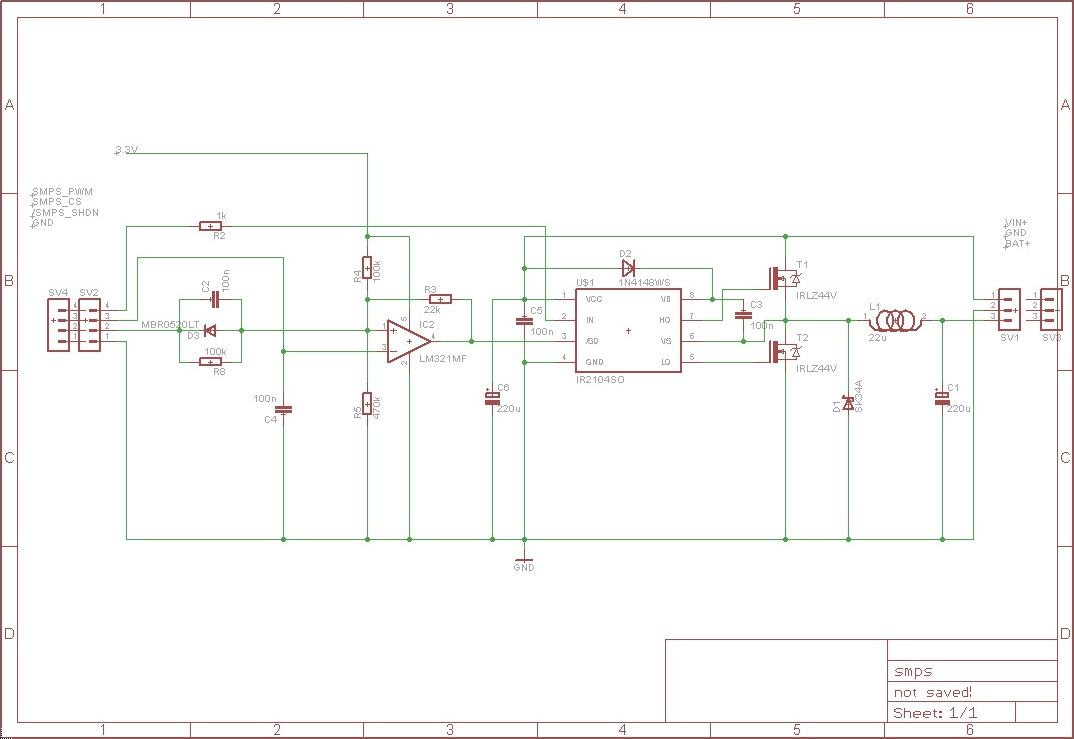 NOTE: I found a document from Texas Instruments that, in page 9, deals exactly with the issue and provides a number of solutions and trade-offs.

Madmanguruman and David Tweed are probably on the right track here.

Here is a scenario:

When the circuit starts the synchronous FET (T2) will be on. It has to be this way because there is no bias voltage for the high side drive for T1 except through T2. So, T2 sinks current from the battery through the inductor. Then finally T2 turns off. It doesn't matter if T1 turns on or not, the inductor dumps current back through T1 (or its body diode). The current has to go some place. SMPS are 1 quadrant devices (almost always), so the Laptop supply sinks nothing. The current can only go into C5 and Vcc of the IR2104, which has a max supply voltage rating of 25V. Boom.

One obvious difference between a resistive load and a battery is that on startup, the resistive load is zero and the battery obviously isn't - it's a source after all. This is called a "precharged load" and can be messy without some form of active or passive OR-ing control.

You don't have any isolation between your synchronous buck and the battery, so if your PWM commands low duty cycle, your "T2" (it really should be Q2 or U2, since T is generally used for transformers) will be on with a wide duty cycle and sink current through the inductor. Your synchronous buck may start acting like a synchronous boost, or even saturate out and short the battery. As "Some Hardware Guy" stated, when the battery is connected you may see some interesting things on pin 6.

Also, there are some intelligent buck controllers out there that can sense the low-side switch drop and shut things off if heavy current is detected. The IR2104 is a high-side / low-side half bridge driver, which can be used to drive a buck, sure, but it's not the best choice.

Try a big diode between your buck and battery, and see if the behaviour changes.

Application note AN-978 has some notes on sizing the bootstrap capacitor C3 which may be relevant. The examples use a considerably larger value than 0.1uf

You're not really supposed to connect the Vcc pin of the IR2104 directly to the high-voltage side of the output circuit. Among other things, this pin determines the drive voltage applied to the power FETs — directly, for the low side, and via the charge pump for the high side. (See the functional block diagram on p. 4 of the datasheet.) While your laptop supply does not technically violate the maximum voltage spec. for this pin, I'm wondering whether spikes that do are being fed back from the inductor via the high-side transistor (or its body diode).

I would recommend regulating Vcc to this chip to no more than +15V or so.

Why don't you have any resistors on your MOSFET gates? Try 22 ohms. The gates will ring at fairly high frequencies and rather high Voltages making a fair amount of RF interference and MOSFET heat without the resistors. The ringing spikes can be up to double the supply Voltage, which likely exceeds some Maximum Datasheet values.

There is a condition that happens in CMOS logic gates where a spike on the output that goes over the Vcc Voltage can cause the upper MOSFET to get stuck on. I forget the name of it, but if that's happening it would explain exactly what is happening here.

Not the answer you're looking for? Browse other questions tagged mosfet pwm driver switch-mode-power-supply or ask your own question.

7
Mosfet Driver not driving mosfet
3
MOSFET Driver Stress
1
PWMing the output of a constant current driver
10
Why do my P-channel MOSFETs keep dying in this H-bridge?
1
Why L6743D MOSFET driver is not working properly?
0
Question on Mosfet Driver
0
Are SiC Mosfets better than Si Mosfets for Solar Charger in max 550V Range