Do microcontrollers have a big resistance?

Well, it maybe seems a very basic question, but I have this question because I'm trying to understand the 0 weak and 1 weak on pull-ups and pull-dows, for example: 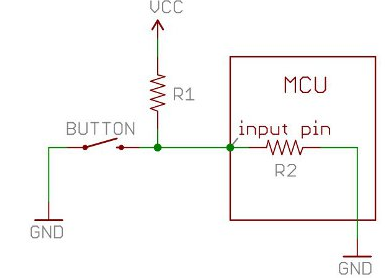 Here, when the button is not pressed, we have a weak 1 on the input pin, and when the button is pressed we have a strong 0 on the input pin (or, at least, this is what our professor taught us). But this strong 0 is because the MCU has a BIG resistance so all the current will go directly to the left GND instead of going through the MCU. Am I right?

Can you give also typical values of pull-ups resistors and values of MCU resistance?

That is correct, in the sense that it can be thought like that for the sake of simplicity, but in reality there is no resistance at all, as it's a CMOS input which has an extremely high input impedance. It can be thought as resistor so large in value that it's not even there, and theory no current flows in or out that pin.

However, nothing is perfect, and there can be leakage current flowing in or out of that pin, but in worst case it is in the order of 1 microampere at 5V voltage, so it can be thought of as resistance larger than 5 Megaohms.

Typical values for pull-ups is a more broad question, as there is no single answer. Depends on supply voltage, switch current rating, level of coupled noise etc. So from 1k to 100k maybe.

Can you give also typical values of pull-ups resistors and values of MCU resistance?

'Typical' MCU input resistance is >100MΩ, except for those that have built in pull ups or pull downs. But you shouldn't rely on a 'typical' value - read the datasheet to find the specs for your MCU (and remember that temperature can have a large effect).

For external pullup resistors the 'typical' values I have seen are around 1-50kΩ, but it depends on the circuit requirements. A higher value draws less current when the input is low, but has lower EMI immunity. Some switches may require a lower value just to get enough wetting current to keep the contacts clean.

A microcontroller input does not have a weak pull down as you have drawn it (R2). It has a high impedance in the form of a MOSFET gate which should be many megaOhms. There are other parasitic paths to the power and ground rails which would reduce that impedance but I don't know typical values, or even if there are typical values. Seems doubtful.

So there is an "R2" so to speak but it's not necessarily tied to GND. It could be tied to +V. You don't know. In reality there's probably one to both and what voltage it sits at when disconnected at is indeterminant. The way you have drawn it implies that with nothing connected to the input, the input pin will read zero which is not true.

But if you are talking about inputs where an internal pull-down (or pull-up) is enabled your diagram is correct (for a pull-down). I would expect the internal resistance to be no less than 20K typically. 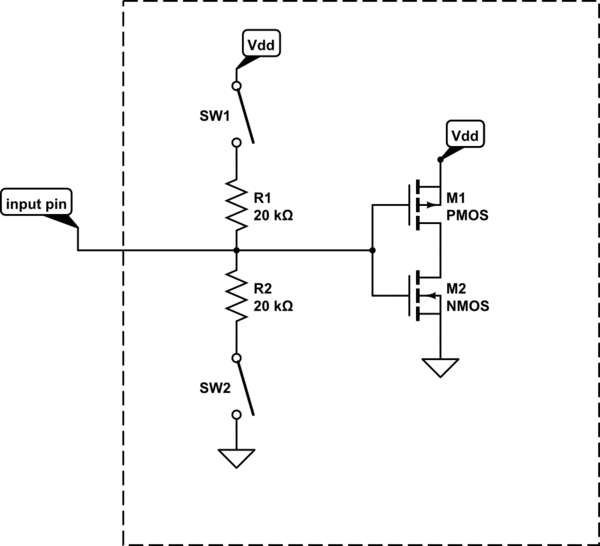 For compactness on silicon, the pullup is likely to be a long_channel narrow_width Pchannel Fet, or perhaps a very weak current source.

By manipulating the FET of the long_channel FET, you can enable or disable the pullup current.

Shutting off a current source, perhaps driven from a central bias generator, is only slightly more complicated.

My views on this are from the circuit designer level, using some understanding of FETs and how they are modeled. I am not a skilled device physicist.

Not the answer you're looking for? Browse other questions tagged microcontroller pullup pulldown or ask your own question.

33
What makes a pull-up/down resistor strong or weak?

33
What makes a pull-up/down resistor strong or weak?
3
Pull up circuit current flows?
53
When to use pull-down vs. pull-up resistors
0
Can this active-high scenario be achieved without an external pull down resistor
0
Pull up/ Pull down resistor
0
Misinterpreted explanation in book?
1
Why we don't use pull down resistors for implementing I2C protocol ? And why resistance value varies in I2C depending on its speed?
0
How does a pull-down prevent a "false 1" in a pin?
0
False button read problem
1
Is it generally OK to ignore the current in and out of a MCU pin when analyzing circuit external to the MCU?