I've built a Class C amplifier for educational purposes and believe I understand the major concepts on how it works. The only piece I'm struggling with is how to calculate for the base resistor. From the resources I can find, they authors talk about calculating the RC base network for 10 times the input signal time. My experience is quite different.

My question is: what is the formula to correctly choose the base resistor? Any good resources on negative clamping circuit calculations? 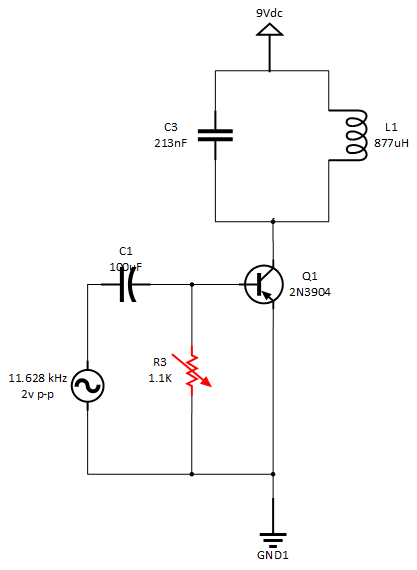 In that topology all the base bias current is supplied by the source. The base resistor is there to keep the transistor off until enough voltage is available to overcome the Vbe of the transistor. Now in your specific case you also need to adjust the input cap in order to achieve the high pass filter that you are after.

There's lots of info out there if you google a bit.

Resistor Rb connects to the transistor Q1 base. A biasing resistor which connects to the base of Q1 try to pulls the base of transistor further downwards and set the operating pointer dc bias point below the cut-off point (In cutoff the collector current is ICO which will be of micro amperes order and hence can be assumed to be zero) in the DC load line. The dc load line is the locus of IC and VCE at which BJT remains in active region.

You may have realized by now you specified an NPN but showed a PNP which is incorrect.

I have simulated this for your here and you can work out your own equations. f(Vin, fmod, Mod index and effic.) 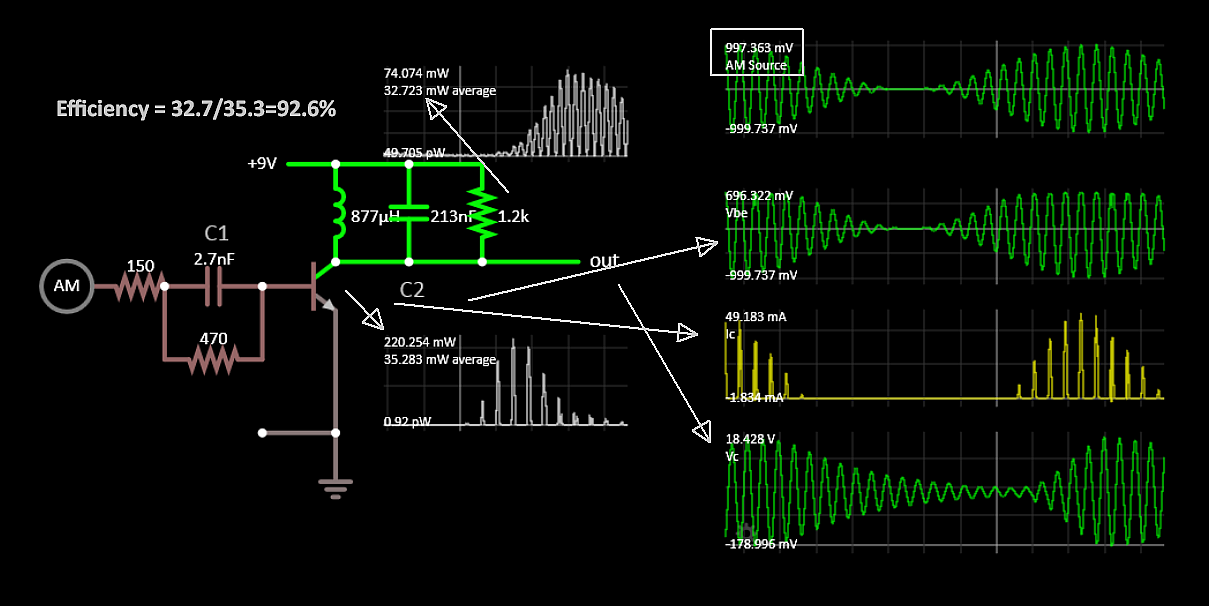 Since you chose AC coupling, Rbe resister to ground will not work as the cap charges up and doesn't decay.

Remove R3 and put instead diode 1N4148 . The idea is to allow both signal half cycles have about equal way through a PN junction to prevent C1 collecting any DC. That DC would block the way of the signal to the base of the transistor.

The diode must have opposite direction than the BE junction of the transistor. If your transistor really is PNP as drawn the diode should have its cathode connected to transistor's emitter and anode to the base. If it's NPN as written the diode should be the anode downwards.

Your R3 discharges to some degree the DC which tends to cumulate into C1 but it also loads the signal source and cause losses. I guess that's why you found some optimum R3. If your signal source was as drawn (=no series resistance nor other current limitation) the output of the amp would increase as R3 decreases. Finally it would not be an amp at all because dissipation in R3 would be more than the output.

C1=100uF and no resistance drawn in series with the signal source looks bad. The peak base current could burn the the transistor. Hopefully you have there some resistance in series, say at least 50 Ohm. I guess 1uF capacitor could work well in demonstration purposes and at 11.6kHz its higher reactance gives some protection to the transistor. In addition you can use a ceramic or plastic 1uF capacitor. Electrolytic isn't a good idea without polarizing DC.

You seem to have no load. The LC circuit can develop peak AC voltage = your DC supply if you happen to hit the resonant frequency and there's remarkably low losses in the coil. That AC is summed to the DC when you calculate transistor's peak Vce. Just 9V supply makes total 18V peak to your transistor which isn't fatal but if you have more than 9V beware.

Not the answer you're looking for? Browse other questions tagged amplifier bjt biasing diode-clamp or ask your own question.

5
BJT Class A Amplifier - Help calculating resistor values \$R_C\$ and \$R_E\$
0
Amplifier Gain and Offset (Positive m and Negative b)
0
Beginner A-class audio amplifier
0
Why is the effective base resistance important for the voltage divider BJT amplifier?
1
How does a transistor make a signal copy?
1
In a class C amplifier, how does RB biases the base of transistor?
2
Tuned common emitter amplifier design
0
Calculating BJT Base Resistor Value
1
Differential pair with current mirror - unequal currents