I'm looking into creating positive square wave sharing same reference ground as primary on the secondary side of a transformer without using a rectifier. Assume that I have ability of providing the top of primary winding with a square wave voltage alternating between 0 V and 9 V.

Would following earthing configuration provide a transformed voltage on the secondary that would alternate between 0 V and 9 x N volts? N is the turns ratio. Primary and secondary share the same ground. 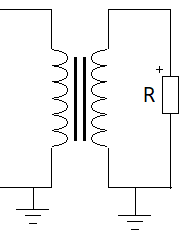 If such configuration is not possible, would a shunt resistor help the situation? 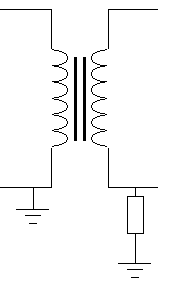 If you put a signal onto a transformer primary that doesn't have an average DC level of zero, the primary current eventually becomes infinite. Obviously, long before that happens your signal source current limits and things stop working. Just regard the primary as being an inductor and that should be clear.

If you AC couple (via a capacitor) the signal to the transformer primary then the average signal on the primary is zero and you're now driving the transformer as it should be driven.

However, the waveform from the secondary also has an average value of zero and there's nothing you can do about that without using steering diodes and clamps to recover that signal to be roughly 0 to 9 volts x N.

would a shunt resistor help the situation?

If you had a load, then it would depending on how the load was grounded.

With a transformer, you can split the ground and prevent current from transferring from one side to the other. This is useful if you want to prevent noise or currents (ground loop isolation). Ethernet isolates by separating grounds.

Not the answer you're looking for? Browse other questions tagged transformer grounding earth or ask your own question.