I am designing a automation system and need to have multiple slave devices(probabaly arduino UNO or NANO) communicating both ways with master device (Raspberry PI).

There is a server and database running on a raspbery PI and I need be constatly sending/reading data from individual arduinos that have sensors connected to it. Based on certain actions from the sensors on arduino boards, raspberry PI will be sending sql querys to the database.

My main concern is how do I talk to individual slave boards with a single master device. I only see 3 options here: 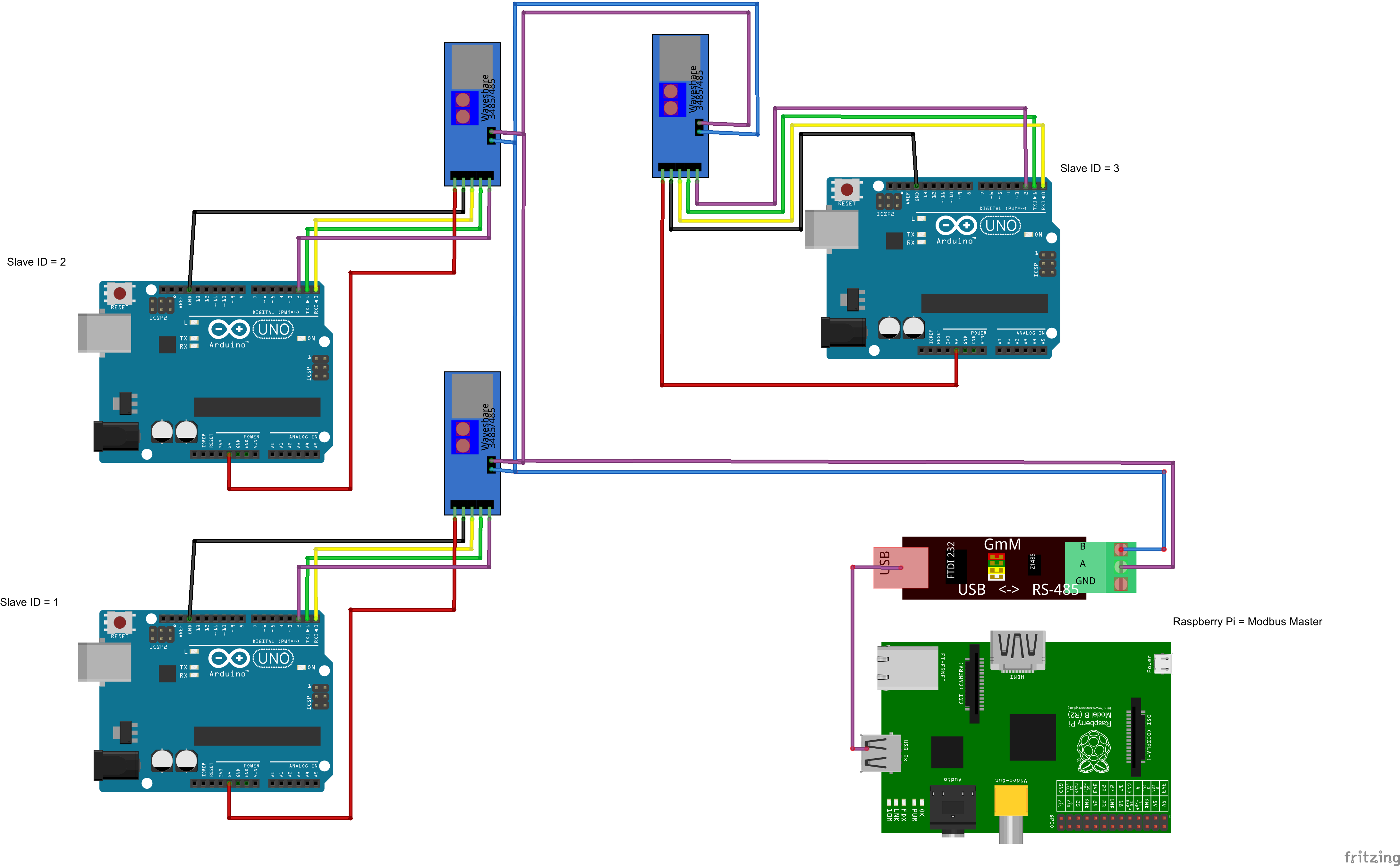 Any advice is appreciated! Thanks

USB and Ethernet are pretty much out of the question here.

For connecting 50 devices and a host with Ethernet, you would need a 51-port switch, or several smaller switches distributed to have the total of 51 ports. Ethernet connections are point-to-point so you need 51 cables as well. Limit is 100m per span, or 90m inside the walls to allow 5m of patch cable at both ends. Power over Ethernet can power these, but that's even more expensive.

For USB, you also need a huge tree of USB hubs to provide 50 ports for 50 slaves. USB has 5meter cable limitation, so that's not much. I don't know how much current one Arduino will draw, but assuming minimum of 1 unit load of 100mA, you can't provide more than 5 or 10 devices out of one USB port, unless hubs are powered.

So only real option from all of these is RS485 it still requires careful designing.

Connecting 50 devices means you need a tranceiver that is rated for half a Unit Load so you can have up to 64 of them on the same bus. The RS485 adapter you draw in the picture has a chip that has a rating of 1 unit load, so you can't connect more than 32 devices on a single bus, and you either need to use another tranceiver board, or split to use two buses with 25 devices plus host adapter on each.

The RS485 bus must be linear. The stubs from bus to a tranceiver must be relatively short, but don't do stubs if you don't have to. The bus must also be terminated to the characteristic impedance at both ends of the bus, with a 120 ohm resistor. The problem is that the tranceiver you draw in the picture has the termination built-in, so they must be modified so only the first and last device are terminated. Or remove termination from all of them, to allow the placement on the bus freely, and use external 120R resistors at suitable places where the bus ends. The bus simply does not work properly if it incorrectly terminated.

Moving comments to an answer:

Thnaks for the reply. Would you suggest how would the wiring look if I used ethernet to communicate with multiple slaves? Would I just add ethernet shield to arduino devices, connect all devices to the same network and use MQQT or simmilar to control slaves?

Out of these three options, I would recommend RS485 if you don't need high speed.

Interesting question. In any case, you're going to have some mess. What about wireless connection? Some ESP32 module is cheap, easy to setup with Arduino IDE, you can make individual addresses for your arduinos. They also don't take much space or power. You can have a local secure wifi-network uniting RaPi and all Arduinos.

Your host device raspberry can be connected to router that will unite all arduinos, router can support so many connections at once. Alternatively, RaPi can have several ESP32 as well (one ESP32 can support up to 10 connections with other devices). It's not the cheapest option, but it will make everything so much cleaner without 10km of wires. I would at least try to implement it with, say, 2 ESP32+arduinos and one ESP32 in raspberry as a host and I would just see if it works. All you'll need to do will be to provide power to all those arduinos, other than that, you'll have beautiful wireless net. Provided the signal reaches the RaPi.

Of course, there're many aspects of the project you need to take into account even to decide if it's viable at all to make such a thing, if you have serious distance between arduinos, you may want to invent something to make it work.

Not the answer you're looking for? Browse other questions tagged arduino raspberry-pi ethernet rs485 usb-hub or ask your own question.

4
Multidrop one or two lane bus
0
Connecting 4 devices on RS232
2
Wire up multiple slave Arduino devices to a master Arduino device
1
Struggling with serial communication over RS 485 using modbus protocol
2
Arduino I2C communication between 2 master networks
3
Is my SPI multiplexing design correct?
0
How to determine the physical location on a RS-485 daisy chain / bus topology?
1
Modbus RTU over RS232 link
0
Why lines A and B are HIGH when idle (rs485)
0
How to increase data through put of RS485 RTU?