2 LEDs for a mixer, one for signal monitor and another for mute status

I'm sorry I know I already asked for the similar question but now I learned how to properly ask my question and I will detail it more on this thread.

I have a DIY mixer on breadboard right now.

It's only 1 channel for the moment and I used a SPDT switch to pass the signal on or off. The center pin of the SPDT is connected to the output. Left pin is at the input where the signal comes from, and the third pin is on ground to minimise the noise when the switch is on the muted status.

I successfully added an LED with a 3904 transistor on this channel so when the SPDT is on, passing the signal to the output, this audio signal (AC I guess) is turning the 3904 transistor on and lets the green light monitors the signal, this LED reacts to the audio signal, like a level meter LED bar graph but only 1 LED, it flickers as the sound frequencies are being played.

Now my question is I want to add another LED, a red one, that would turn on ONLY when the SPDT switch is turned off (this is the muted state for the chanel mixer.)

I tried many things already, with 3906 or other simple circuits I found online for toggling 2 leds but since all I find online is using a steady voltage instead of an audio signal like I do right now, it makes my circuit light up both leds when the signal is on.

I hope it is more clear now, I'm sure this is basic electronics but 'm new to all this so it's complicated for me. 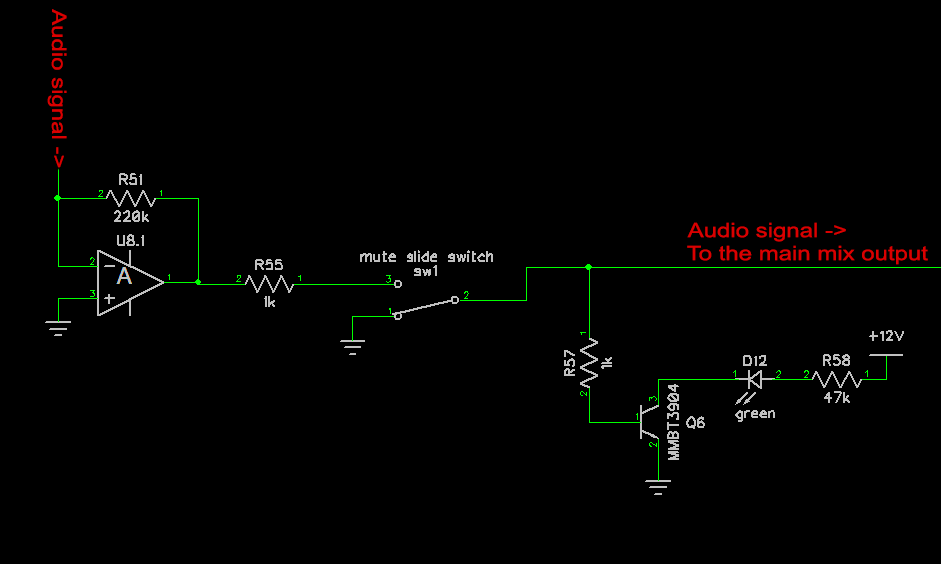 Turn the switch around!

make the common terminal go to ground, the mute position connect the end of R55 to ground, and the remaining terminal short out the red led (or use an NPN transistor if sinking the current is undesirable).... 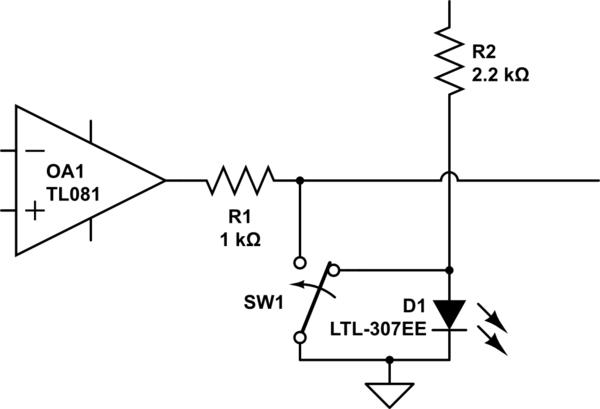 You will want to refine it a bit, as any DC on the output of the opamp will produce switching clicks.

Your level detector also has a problem in that the 1k base resistor will only draw current on a positive going signal, where it looks like 1k in series with a diode, but when not conducting that chain looks like an open circuit. Your source impedance is 1k, so that produces pretty horrible distortion.

Not the answer you're looking for? Browse other questions tagged transistors led switches mixer or ask your own question.

1
2 color LED short circuit my board
2
How to use a NPN-Transistor to get status LEDs for an ATX power supply?
2
2 LED Parallel circuit help?
3
Semaphore using one microcontroller pin
4
Why are there no high efficiency green/cyan phosphor LEDs
0
Can 1 relay turn one light off and another on?
4
How to replace a green LED with a red one in a simple transistor switch?
0
Toggle bi-colour LED
0
Dual led and transistor 3906 3904 switching with spdt switch on and off toggle help