I just bought a new MSO2000A series Rigol scope, 300MHz bandwidth version. When you set the timebase to 20ns or below, there is an oscillation present.

Can anyone else with this series of Rigol scopes observe this issue? 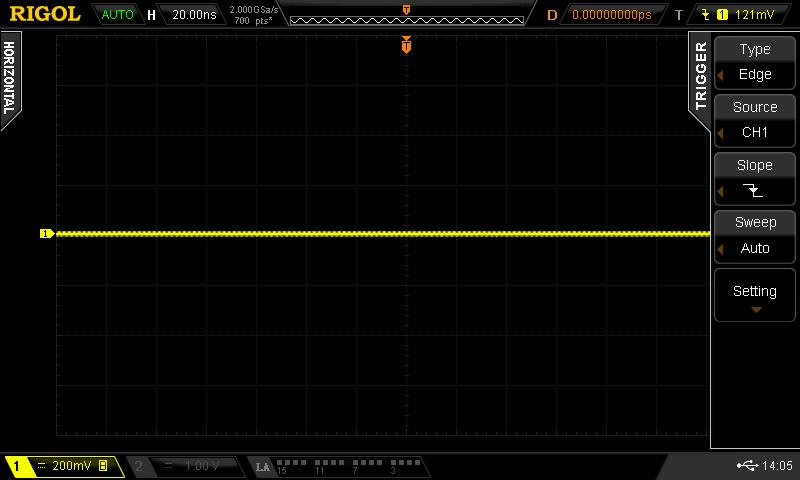 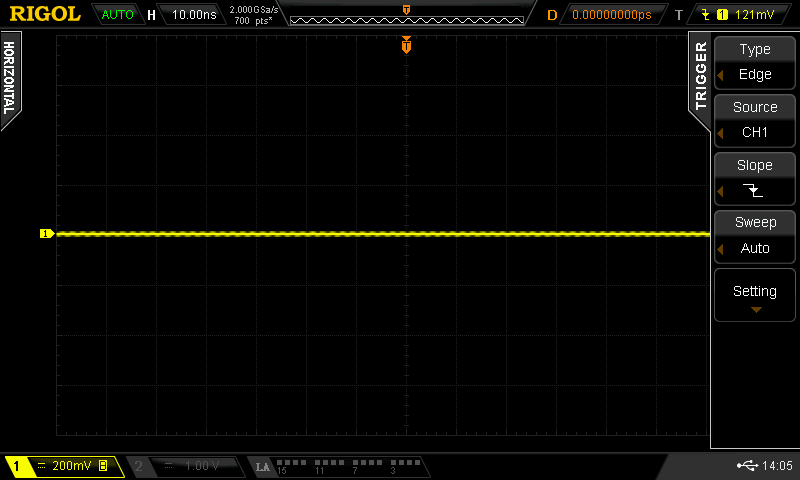 You can see it at all amplitude ranges, the oscillation always appears approximately the same size on-screen regardless of vertical scale.

This oscillation is in-phase even though it's not triggered on it, and it looks to be 500 MHz on the nose, so I strongly feel it's intrinsic to the scope, and either an artifact of the sampling itself or crosstalk from something in the clock domain of the digitizer.

Restarting the scope causes the amplitude to change randomly. Sometimes it is very obvious, sometimes not there at all. It is less obvious on Ch 2, which makes me further think some crosstalk/EMI problem as opposed to just a display artifact.

It is not affected by 50-ohm vs 1M input. BW limit has literally no effect (even on 20 MHz limit you can still see a 500 MHz oscillation!). Probe ratio selection makes no difference. "Invert" does invert the polarity of the oscillation. Setting coupling to AC has no effect, but coupling to GND causes the oscillation to disappear. Connecting a BNC short looks identical to a floating probe or no connection (as shown).

Turning on channel 2 (which decreases the sample rate from 2GS/s to 1GS/s) has a noticeable effect, slightly attenuating the oscillation. But still present.

I applied an external signal, and the oscillation was less obvious due to external noise, but still apparent, clearly a 500MHz periodic component on top of the signal.

Here it is again after a restart, looking like a good clean line. Nothing was changed other than turning it off and on. 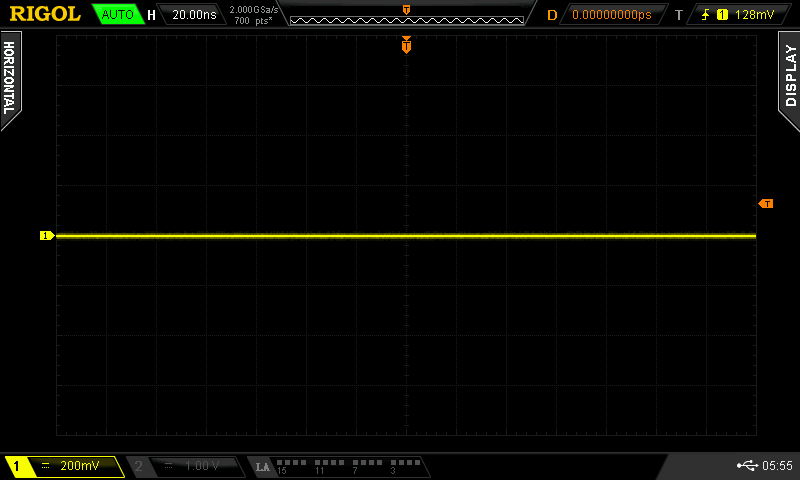 Oscillation is still visible in dots mode. Here is the FFT showing a clear peak at 500 MHz. 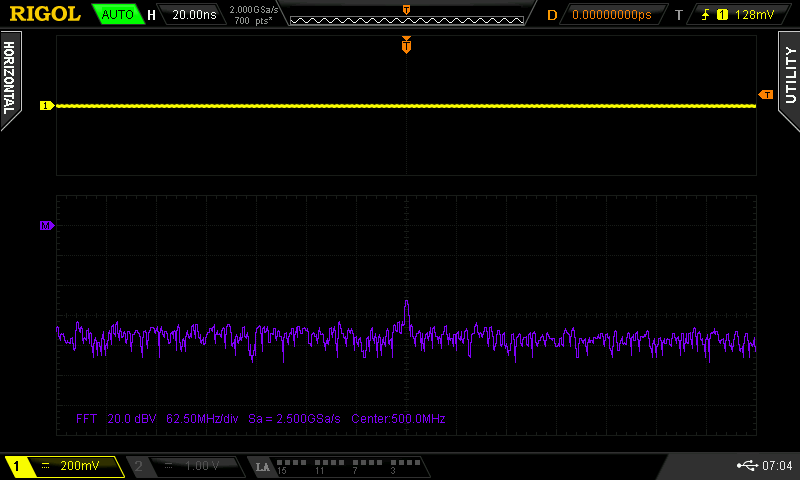 Here's another observation, which I think might be caused by the same thing. When you zoom out the horizontal the baseline signal actually shows two strong bands, instead of one band strong in the center as you would see from a regular noise spectrum. This looks more like a sinusoid or bistable signal + noise. Shown below in both vector and dots mode. 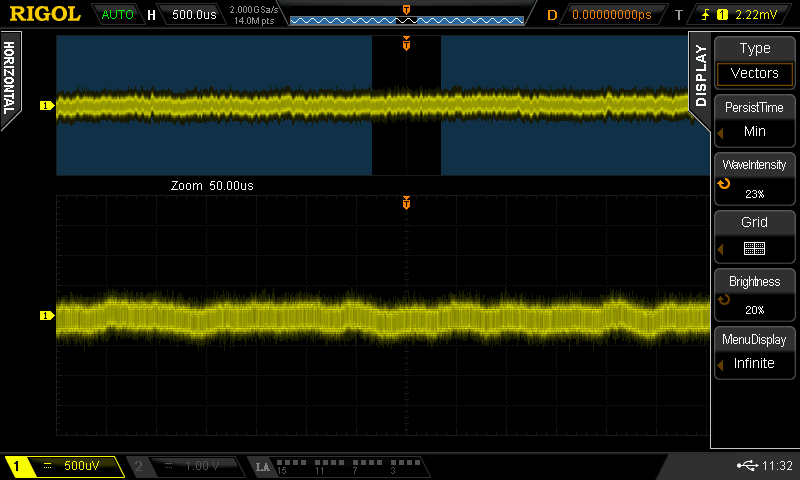 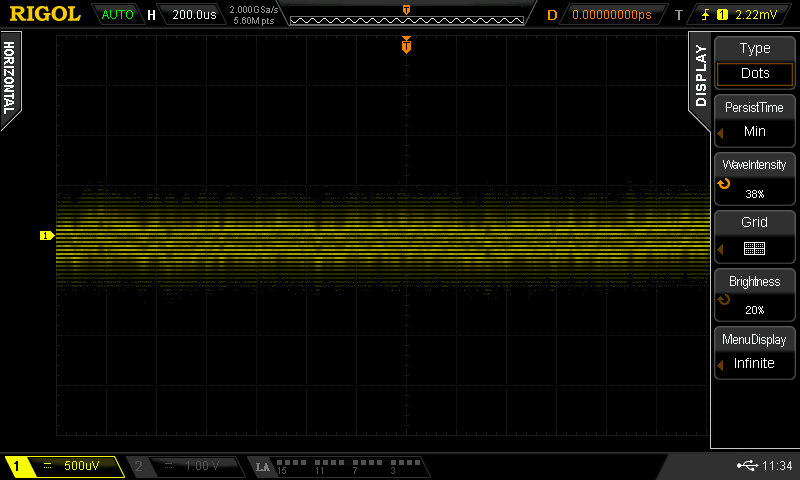 The banding effect is also reduced when turning on Ch 2 (2GS/s down to 1GS/s shared sampling), similar to the oscillation amplitude being reduced. 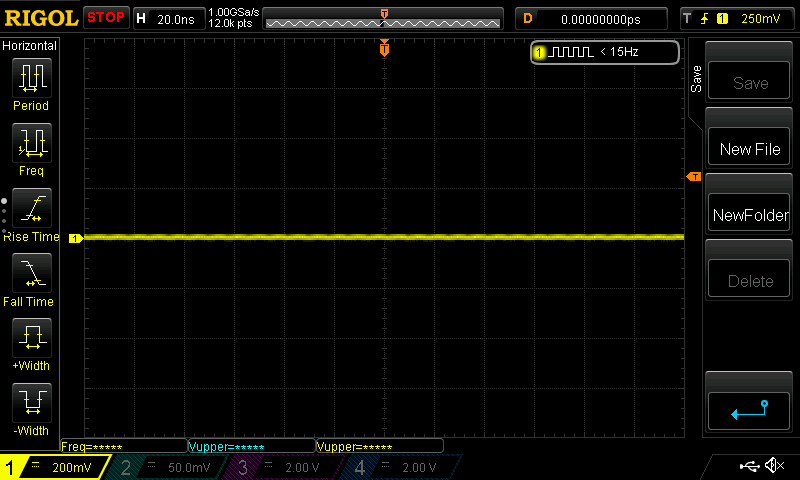 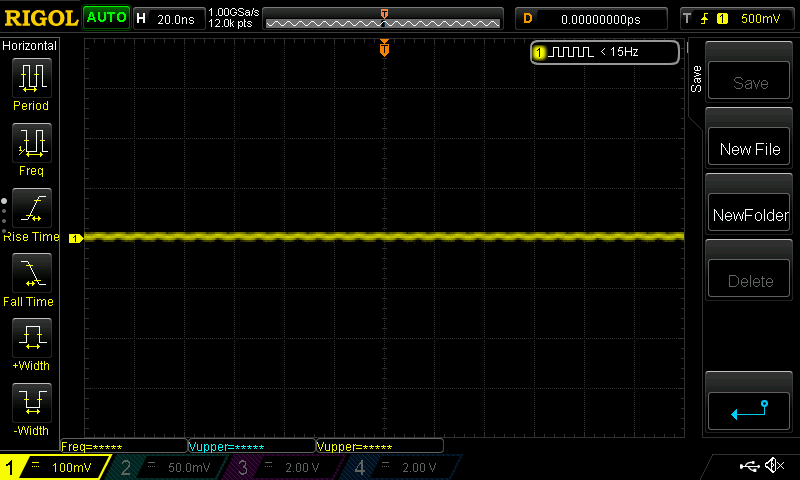 But I think that this is normal and we don't have to worry about it. But I'm not an EMI expert.

2
Error caused by Scope or Function Generator?
3
Why does inserting a resistance in the common of my scope probe cause it to pick up AC noise so much worse?
0
Signal Change When Oscilloscope is Added
2
Raise SNR of pulse signal by passive LC filter
1
How to measure AC and DC with oscilloscope
3
Bandwidth of an oscilloscope with differential probe
15
Rigol DS1074 oscilloscope shows very wrong timing
0
Analog Oscilloscope Flickering Signal Problem