I have a pneumatic chuck that needs a pulse that lasts a bit to open and close. Currently I have 2 foot pedals and each works in one direction. I would like to have just one pedal and a relay circuit to make it a flip-flop, but I only know how to do it digitaly.

Basicaly to get both a push button and a latching switch with the same pedal that in hadrware only has push buttons.

Is it possible to have this kind of functionality with just relays, and how?

I can solve the problem in general, I would just like to know if there's a solution to do it without other elements like timers, capacitors and microcontrollers.

Have a look at latching relays.

Figure 1. There's an animation of one on [HomoFaciens.de] (https://www.homofaciens.de/technics-base-circuits-relay_en.htm) that explains the operation very well. (Click the "animate" link in the article to see it in action.)

Note 1:
The circuit relies on the relays energising in series and on their own. That means operating on half of supply voltage and full supply voltage. You'll need to rummage through your selection of relays and find a pair that will operate when the coils are connected in series.

... but I need a pulse in different directions for the duration of holding the pedal.

So the latching would chose the direction and second contacts on pedal would just activate it.

The latching relay referred to in 'Solution 1' of the accepted answer is also known as a ratchet relay. It gives an optimal solution with a part count of only one.

Here's the schematic using a readily available ratchet relay with 2NO + 2NC contacts. 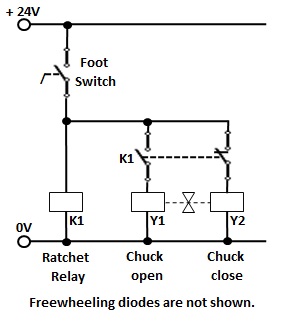 Maybe I have't understood the qestion, but: If you are looking for a Simplest Soft Latching Power Switch Circuit, here you can see detailed review of it's schematic: in this video from EEVBLOG

To answer first qestion I can advice you some kind of relay IC: for example ADG736 ADG736 or similar.

If you now looking to use it with high current, you can use relay connected to mentioned schematic.

Not the answer you're looking for? Browse other questions tagged relay circuit-design or ask your own question.

0
Enabling/Disabling 24V using sensor and relays
0
How to control a motor with only relays and push button?

0
2 momentary switches, controlling 4 outputs in sequence using latching type relays
1
How to debounce a low pulse switch for automotive lighting
1
Is there a circuit simulator out there that has latching relays?
0
How to flash between two different sets on LEDs using a 556 Timer IC
0
Understanding the working of relay
1
Turning on/off esp8266 using a button
2
Using relay (no microcontroller) for turning on/off power
0
Detect how many push buttons are being pressed using a maximum of two Arduino pins