What is the impact of a pass transistor on power supply noise?

I am designing an ultra-low noise 5V power supply for a DAC in an audiophile hi-fi application. I would like to get the noise floor below 5uV lower. I am looking to use a TPS7A4700 LDO which has a noise floor of 4uV. This level is good. I intend to plenty of ripple filtering before and after the regulator stage.

However, I need to supply 3A and the TPS7A4700 only drives 1A, tops. Hence I am considering using the classic pass transistor design (from the National Semiconductor Handbook): 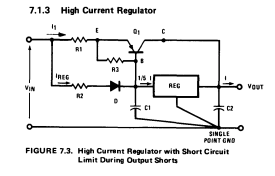 My question is - what is the effect of the pass transistor on the overall noise level? Also any suggested devices or proven circuits for this task?

I am designing an ultra-low noise 5V power supply for a DAC in an audiophile hi-fi application. I would like to get the noise floor below 5uV lower.

Well, I'm sorry to be the bearer of bad news...

If your device draws a few amps at 5V, it is highly likely that load current won't be perfectly constant. In fact, pretty much the only thing that can draw a few amps at 5V is loads of digital circuitry, perhaps a raspberry pi and that kind of stuff... which means highly variable, pulsed, spiky load current.

Even if the supply impedance (regulator + traces) is pretty low, say 1 mOhm at 1 kHz, a small load current variation of 5mA (less than 0.2% of your 3A total) will result in 5µV voltage variation at the load.

In other words, in this situation, a low noise regulator is a pointless waste of resources since supply voltage variations at the load will be determined by load current variations times supply impedance, which will be much higher than regulator noise under realistic circumstances.

Note that a regulator controls output voltage at low frequencies (up to a few kHz or tens of kHz). Above that, output caps dominate. A regulator can only add noise in the frequency band it controls. However, HF noise will go through it in both directions through parasitic capacitances, which means a well chosen 5 cent ferrite bead and a couple of caps are a perfect complement to a good LDO. The LDO provides PSRR at low frequencies, and the LC filter handles the HF part.

What you need to do is make a list of all the subsystems and their requirements in terms of power supply current/voltage, what maximum noise they can tolerate (high and low frequencies) and how much noise they inject into the power supply. Think how to isolate the sensitive circuits from the noisemakers. Then partition this into the minimum number of power domains that will do the job, and there you go.

The two most sensitive parts both draw constant current usually : clock oscillator, and DAC voltage reference. The latter is the most important, because the DAC's output voltage (or current) is the product of its own reference and the digital code. Any trash on the DAC reference goes directly into the output, in product form (multiplication) not in additive form. This has the rather hilarious consequence that if you measure output noise with a DAC value of zero (digital silence), DAC reference noise DOES NOT appear in the output (because the output is the reference multiplied by digital value which is zero). However if you play a signal, or better a constant digital value (digital DC) then reference noise goes into the output and it can be measured. So you can use your favorite low-noise low-power LDO, like ADP151 or whatever. On a constant current load, you can use a low noise regulator, it will meet its spec, because... load current is constant.

Opamps don't care about low-frequency supply ripple, but they care about HF noise because PSRR drops with increasing frequency, so the keyword is "partitioning" with ferrite beads and LC filters so the high MHz trash from logic doesn't get there. Since opamps draw variable current, supply voltage will fluctuate slightly in use due to regulator output impedance, which means low-noise power supply regulator is useless. High-PSRR regulator and filtering ARE useful to prevent HF noise from upstream to get into your opamps though.

Repeat: there is something like 0.1-0.5 ohms in the power pin bondwire inside your opamp. A regulator with 0.000001 ohm output impedance is irrelevant. Most opamps have stellar PSRR in the audio range anyway, and rubbish PSRR above a few MHz. You won't hear HF noise in the output directly, but it can still get rectified by semiconductors and appear in the audio band, so it is best to keep it out. Thus clean grounding and keeping HF noise from the digital parts out of analog supplies is much more important than a bit of LF noise/ripple on your opamp supply.

Well, the TPS7A47 achieves its noise performance through having been carefully tuned in terms of closed-loop response of the control system it represents.

If you just slap on an external pass transistor, you're building your own control loop and now have to do all the control loop tuning yourself. Look at the Figure 7.3 you've posted: if Q1 is "slower" than the internal pass transistor of your TPS, then the thing can't regulate fast enough to get rid of high-frequency input noise, or to follow fast demand variations. If Q1 is is faster, then you're introducing high-speed noise, because the internal bandwidth compensation doesn't know that.

So, in the end, when using an external pass transistor, you could just as well take the functional block diagram from page 12 of your datasheet and implement it yourself, using the pass transistor and two opamps, and a band-gap reference.

However: since this is audio, it's the trivial case: humans can't hear past two dozen kHz, so you need to get your noise floor right just below say 50 kHz to be certain. Everything above is inaudible, anyways, or can be filtered away trivially with ferrite beads and bypass capacitors.

As such, the TPS7a4700 is overkill for your application: you're not building anything sensitive with a high bandwidth, you're supplying power for an audio amplifier, which is a device with its own power supply noise rejection, and is inherently pretty low in bandwidth.

So, instead of going for a linear regulator with a low noise floor at frequencies you don't care about, but requires you to have a pass transistor, go for a linear that can do the current you need in itself. The TPS7A54 would be such a device, whose noise floor is not meaningfully worse than that of the TPS7A47.

Generally, higher noise rejection is achieved when the input-output voltage difference is larger, which means you'd try to use a high-as-possible input voltage. Problematically, the power converted to heat in that regulator grows quadratically with the voltage difference. I didn't look it up, but let's assume under reasonable heat sinking 40°C/W in that package; say we do not want to get 60 °C hotter than ambient, then we mustn't convert more than P=1.5 W to heat, and because P=U·I and I = 3A, we can calculate that the maximum voltage drop is 0.5 V.

So, for optimal noise rejection in the LDO, you'd put your input voltage at 5.4V to 5.6V. It's often a very good idea to use a high-frequency switch-mode supply to get to that frequency.

Not the answer you're looking for? Browse other questions tagged power-supply noise or ask your own question.