I am currently working on a prototype that is going to generate a burst of pulse of high voltages (e.g. 1KV). To do this, I first made a voltage multiplier and feed the mains voltage (230Vrms) directly into it after isolation was done with a transformer (1:1).

I then need to feed this voltage into another cct (discharg the voltage multiplier) in a timely manner. to be exact, a burst of pulses (5ns ON / 10us PERIOD) needs to be generated at the end.It also needs to generate signle pulses at instances as well so PWM is not the only functionality. the following circuit does this: 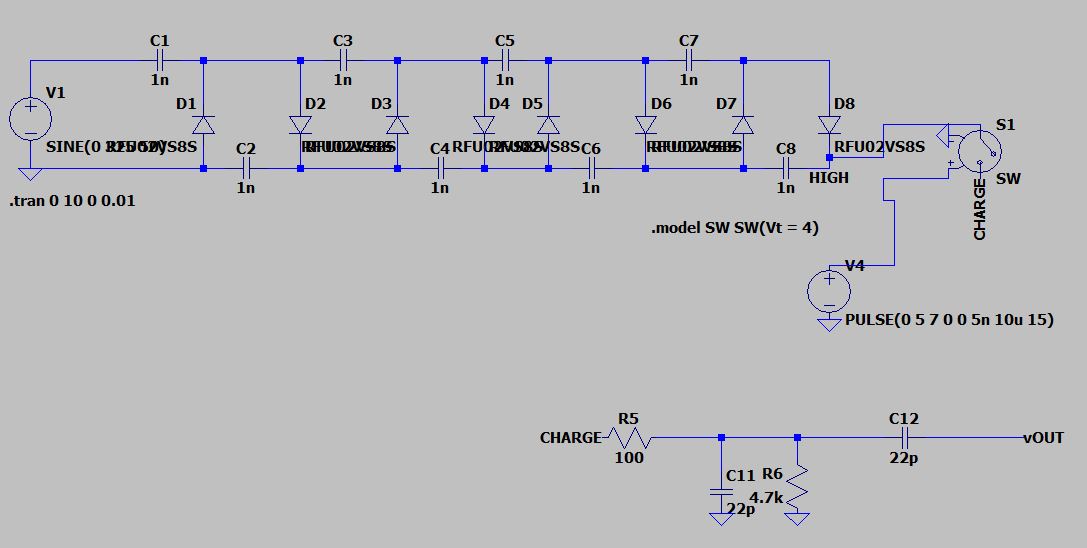 As you can see, the switch I used was just a spice model. I am planning to design this switch with mosfets as their recovery time is suitable for this application (being on only for 5ns). I have made the circuit below: 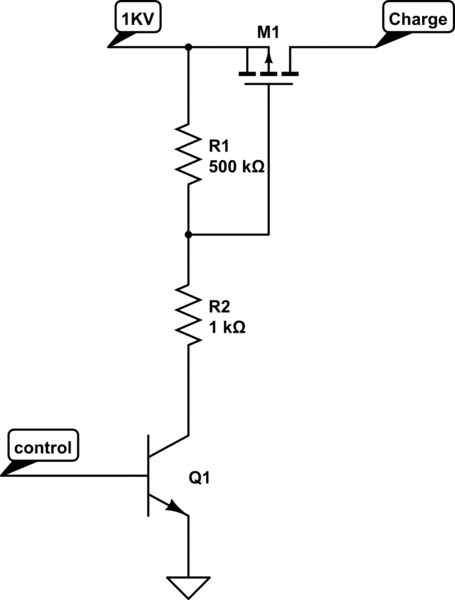 I am having some issues as:

any help would be greatly appreciated.

A p channel is preferable (M1) how ever the max Vds they can sustain is way lower than what I want (1000 V).

You can put two P-Ch MOSFETs in series.

can a N-channel MOSFET be used?

N-Ch MOSFETs provide better performance compared to P-Ch ones. And also finding an N-Ch MOSFET for higher voltages is much easier. But, as stated in the comments section, to drive an N-Ch MOSFET its gate voltage should be higher than its source voltage. Using a 1:1 gate transformer (for non-zero driving frequencies) or a bootstrap circuit may be a solution, though.

would the voltage drop across just be too much to bare?

Depends on the load current. It's also important to give some details about the load (i.e. if it's resistive, capacitive or inductive).

would it better to replace Q1 (NPN BJT) with a N channel mosfet? I don't know if a BJT can coupe with high frequency switching (turning on and going off in 5ns) with an inrush current but I know N channel mosfet does, however the addition of the resistors are going to slow it down so I don't know what to do here!

First, you should consider this: When the Q1 is off, Q1's collector voltage will be 1kV. Put a 20% safety margin. So you have to use a BJT or an N-Ch MOSFET with a VCE or VDS of at least 1.2kV. Second, BJTs have lower input capacitances compared to MOSFETs. So, they seem to work with high frequencies. But since they are current-driven devices, the base current limiter resistor can be higher. This resistor plus the input capacitance may chop off the driving signal. With MOSFETs, you can use much lower gate resistors. For example, if you use a 10R gate resistor with an N-Ch MOSFET having an input capacitance of 1.5nF, the cutoff frequency will be 10.6MHz.

PS: Check your schematic and re-calculate the resistance values. When the Q2 is turned on the Vgs of the M1 will be -998V which is way too high for an ordinary PMOS.

Not the answer you're looking for? Browse other questions tagged mosfet switching pmos switching-transients or ask your own question.