I went through the application notes of infineon and TI. In the datasheet on the MOSFET, there is a junction to case Thermal Resistance given.

Can we use these values to calculate the power dissipation in the MOSFET? Since I read that the Thermal resistances given in the datasheet are measured assuming maximum temperature?

It is also said the cooling method used will be forced-air cooling which is bulky and not very easy to achieve. How do I calculate the heat sink parameter required for the temperature rise I calculate? Do I assume the value of Rthca (Heat Sink thermal resistance)? Is it possible to make a calculated assumption for the Rthca value?

How will I be able to calculate the power dissipation due to thermal resistance? Do we assume a Junction temperature of approximately 110 degrees?

Is 25 degrees a good assumption for Ambient temperature or we use some standard temperature according to the application (40 degrees)?

also, how do we use Rthja (Junction-Ambient Thermal Resistance) in our calculation depending on the cooling area given in the datasheet?

I have just focused on explaining certain things because, when you grasp them, your other questions will likely become irrelevant.

Is it possible to know what extreme test conditions were used to measure the thermal resistances in the datasheet?

The thermal resistances quoted in a MOSFET datasheet are often tested according to JEDEC test standards (such as JESD24-3 or similar). The specific standard or test setup is often listed in a note in the datasheet.
https://www.jedec.org/standards-documents/docs/jesd-24-3

A typical test setup would have a PCB with a 1" x 1" thermal pad attached to the MOSFET drain tab and only natural convection. A typical junction to ambient thermal resistance for such a setup is often about 40°C/W.

How do they find these thermal resistance values Rthjc?

Generally you measure it by putting a known amount of power into the device and then using a pair of thermocouples to measure a temperature difference.

In the figure below, the drain tab is attached to a very large heat sink and the thermal resistance is very low. The device leads are attached to thin wires and the thermal resistance is very high. Power is put into the device. The current and voltage are measured. Thermocouples are soldered to the drain tab and one of the device leads.

In this setup nearly all of the heat is exiting from the drain tab, and almost no heat is exiting from the device leads. Because there is very little heat flow out of the leads, their temperature will be approximately equal to the device junction temperature. The difference between the two thermocouple measurements gives a close approximation to the junction-to-tab temperature difference. And since the power is also measured we an find the junction-to-tab-thermal-resistance by taking the ratio of the two.

I have personally used this method and it agrees pretty well with what's listed in device datasheets. 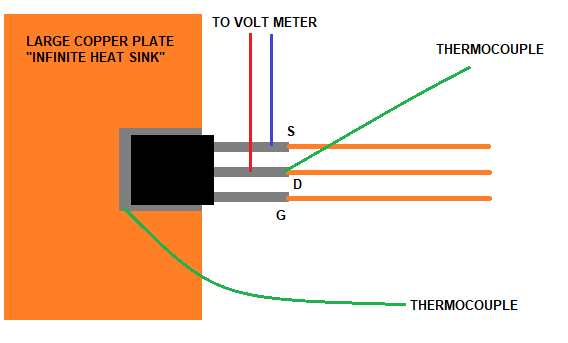 In contrast to junction-to-case-thermal-resistance, case-to-ambient-thermal-resistance will depend on your exact setup. It will change depending on the size of the PCB, its thickness, how much copper is in it, weather the board is horizontal or vertical, weather you have it in an enclosure, etc.

If you have the tools, one way to estimate it is with a thermal model in a simulation program.

To some degree you are probably going to have to rely on experience to build a prototype that gets you in the ballpark and then measure it.

Not the answer you're looking for? Browse other questions tagged mosfet resistance thermal power-dissipation junction or ask your own question.