Is there a difference between a band-pass filter (BPF) and tying a low-pass filter's (LPF) output to the input of a high-pass filter (HPF)?

It seems to me that they should do the same thing---or perhaps they are algebraically equiveilent (are they?). If not, what is the benefit of using a BPF instead of a serial LPF+HPF?

Is that effectively the same as a BPF?

Your intuition is correct, the 2nd is derived from the first through frequency transformations applied to the transfer function. Usually, the first step is to calculate the lowpass prototype, which has unity, non-scaled frequency, and which has the form:

This form is reached after calculating the roots of the filter. Transforming this into a bandpass is done by subsituting \$s\$ into the real-valued transfer function. For simplicity, let's consider all the terms \$1\$ (\$BW=\omega_2-\omega_1\$ is the bandwidth, \$\omega_0=\sqrt{\omega_1\omega_2}\$ is the center frequency):

As @Tony Stewart shows, you cannot calculate the two resultant lowpass/highpass filters and build them as separate filters, as in your 1st picture, since 1) as @jonk links in the comments, there is a loading effect, and 2) these two resulant filters are meant to be used in their composed form (your 2nd picture).

rough Simulation You need a load R to obtain an impedance ratio on the output and so looking at the s11 s22 impedance of the in,out , they are different, but similar but not the same s21 transfer function.

This configuration is sub-optimal for a BPF. Here a double tuned 3~8.5 MHz BPF.

The left and right images just switch the output response. 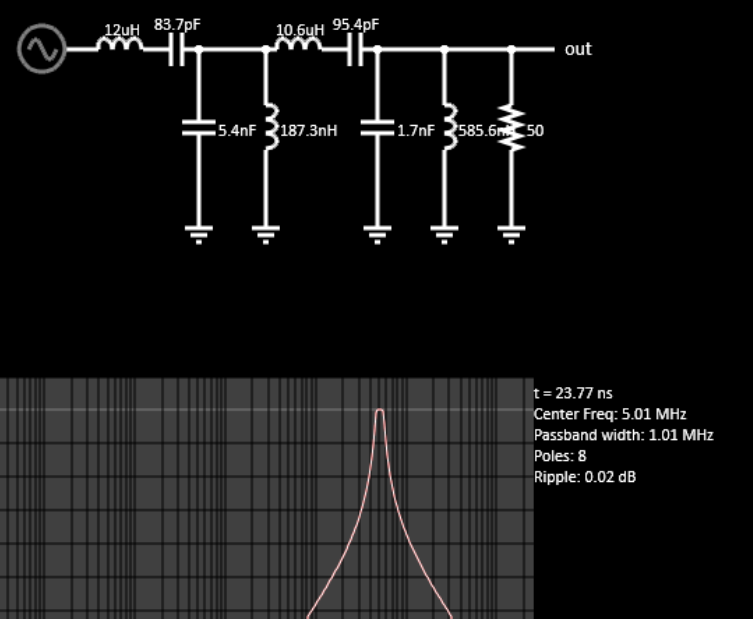 Not the answer you're looking for? Browse other questions tagged rf filter low-pass high-pass-filter band-pass or ask your own question.