Why would an op-amp use BJTs over MOSFETs?

I've always been told that ideally, op-amps have infinite input impedance. So when I was looking at the LM741's transistor level schematic, I was confused when they used BJTs instead of MOSFETs. 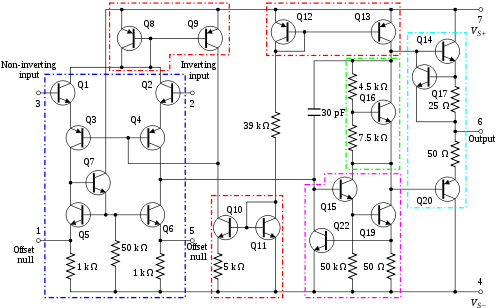 Wouldn't using a BJT result in current flowing into the input pins?

The 741 is an old piece of junk, primarily used to teach basic electronics for cheap. I seem to remember reading somewhere that if every 741 ever made were to be collected, there would be enough to give every person on earth 6 or 8 of them.

There are other op amps out there that can handle RF frequencys, or handle high output currents, but they don't really fall in these catergories.

As you can see, each type of op amp has different non-ideal DC characteristics, and input impedance. How much current flows into the op amp inputs depends on the input impedance. For most modern op amps, these are very small currents, and can be considered negligible for the majority of applications. Which type of op amp you use is a design consideration, factoring in speed, cost, temperature range, and any precision concerns.

Bipolar opamps like the 741 or the LM324 have different tradeoffs than FET opamps. For one thing, they were designed many years ago when FET IC technology was less advanced relative to bipolar IC technology. It's unfair to call the 741 junk; it was something wonderful in its time. Its close derivative, the LM324, is still in volume production today, so obviously many people think it is the right tradeoff for their requirements.

One significant advantage of the LM324 is its price. Often enough you just need a opamp without very stringent requirements. If the 1 MHz gain×bandwidth product, the bias current, and the few mV of offset are all good enough, then everything else is just expensive junk.

In general, it's a little easier to get the offset voltage down to a few mV with bipolars for the same chip area. There are also advantages in current drive capability and supply voltage range. FETs of course have the really high input impedence. Nowadays these distinctions are more blurred. You can get FET input opamps with offset voltages well below a mV, but then compare their price to the LM324.

Early FET opamps, like the TL07x and TL08x had other problems, like very high input common mode range headroom at both ends. Nowadays, FET opamps are easier to make rail to rail for both input and output, but again compare the price of even the cheapest MCPxxxx with the old standby LM324. Also note the supply voltage range the LM324 can operate over. That's a tough trick for most of today's FET opamps.

Everything is a tradeoff.

MOSFETs are too noisy for many precision amplifier applications. If you have a low impedance source, for the lowest noise of any available monolithic amplifier, you need to go to a bipolar amplifier such as the LT1028 which has a white noise spectral density of 1.1nV/sqrt(Hz). (If that's not good enough, a discrete design can do better).

Contrast that with a typical MOSFET-input amplifier such as the MCP601, which is typically 29nV/sqrt(Hz), or about 700 times worse in terms of power.

If you are doing audiophile audio processing, the best amplifier in the world is a Texas Instruments (nee Burr-Brown) bipolar part. It has a lot of input bias current, but very little distortion.

MOSFET amplfiers also seldom are capable of working with higher supply voltages, such as +/-15V (another frequent requirement of precision instrumentation), and if they are, they tend to cost an arm and a leg, I think that's mostly because they have to be made on a special high-voltage CMOS process line and not mixed with digital stuff.

The 741 was designed in the mid-1960s, so almost 50 years ago. It was somewhat of an improvement over even earlier op-amps (such as the uA709), but it's pretty long in the tooth. Dual versions such as the venerable JRC 4558 have been used in audio applications for decades. As Olin points out, the LM324 is similar (the output stage has significant differences, in part to make it "single supply"), but costs only a penny or two per amplifier in quantity.

Aside from the LM324, I don't think any other op-amp has achieved as wide use as the 741 (maybe some of the JFET amplifiers come close)- the market is more balkanized, with many different choices for the designer, each with its own advantages and disadvantages. Vive la différence!

Ideally all systems would be a mix of BJT and MOS, but that is not how the world works. So for discrete systems, BJT is king. For integrated systems on a chip MOS is king.

This question's been answered several times over, but I feel like a mention should be made of JFET input stages. Some op amps (for example, the TL074 or the LF357) use a mixture of JFETs and BJTs to achieve better characteristics in some respects than a bipolar-only design. (JFETs are preferred over MOSFETs due to their greater resilience when it comes to brief overloads and static discharges.)

These op amps typically use JFETs for the input differential amplifier stage, with most of the rest of the circuit being bipolar for the reasons others have given in their answers. The advantage of using FETs for the input stage is exactly as you say: they have much higher input impedance. If you look at the specs of various JFET-input op amps you'll see ones with input bias currents of less than ten picoamperes--and if you look at the AD549L, for instance, it has an input bias of no more than 60 femtoamperes. Standard bipolar op amps, for comparison, typically have input bias currents on the order of a few nanoamperes (as in the OP07E), up to a microampere or two in some cases (as in the famous LM741). Likewise, and for the same reasons, the input impedance of a JFET-input op amp will be five or six orders of magnitude greater than that of a bipolar op amp.

As with everything in life, there's no panacea that solves all your problems, there's no op amp that you can just be sure will meet your needs regardless of what they are. If you need ultra-low bias current or very high input impedance, go with a JFET-input op amp. If you need low noise or low cost, go with a bipolar op amp. If you need something neither of those can supply, well, look into something more exotic. Chances are, you'll find it somewhere out there.

Not the answer you're looking for? Browse other questions tagged transistors operational-amplifier physical-design or ask your own question.

0
What are the advantages of CMOS operational amplifiers vs bipolar in the same class?

73
When is a MOSFET more appropriate as a switch than a BJT?
3
Mystery circuit: latching relay control with transitor / capacitor - why doesn't it work?
0
Ideal operationnal amplifier with source
1
H Bridge Control using Raspberry PI / Micro controller
5
Single-supply op-amp behavior with 0V input
0
Using a different op-amp model for the project
0
What voltage or node are the BJT substrates connected to in a bipolar process opamp IC?
0
Electret microphone for ADC input