How does a wifi antenna work in full-metal laptops?

As far as I understand, metallic covers of devices like MacBook Air should shield the interior from electromagnetic waves rather effectively.

Even if a wifi antenna is right behind the screen, the other side of the display cover is metallic, so reception would be quite directional.

What do metal-clad consumer devices (laptops, phones) do to pick up radio waves?

They put them where ever they can find an opening and try to do a good job tuning them. Form comes first at apple ;) Take a look at this, they've mounted one antenna just inside the opening for the optical drive on a recent macbook pro. 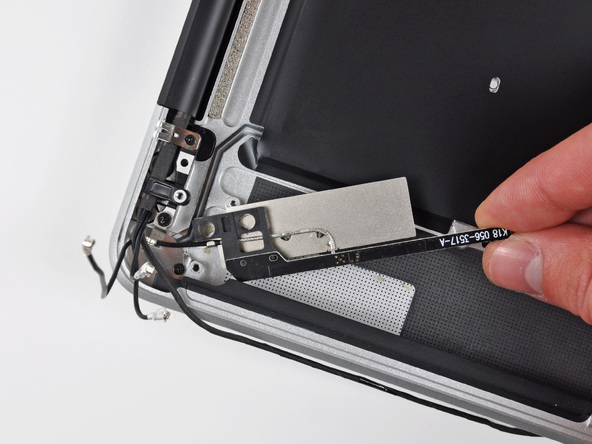 Also they have a patent for a logo antenna

I once did a tear down and comparison of a bunch of apple products antennas and they performed really well compared to others in the field. Although there was that little problem with the iphone ;) So I think form comes first and then it's up to the EE team to be creative and figure out how they can get it to work.

On other cheaper laptops I think you'll find they just hide them behind plastic inserts.

metallic covers of devices like MacBook Air should shield the interior from electromagnetic waves rather effectively.

Probably not as much as you'd think. If the covers surrounded the antenna on all sides and had no large (relative to wavelength) holes in them, then indeed they would be Faraday cages and very little (none, ideally) radiation would get in or out.

But the MacBook's case is not a Faraday cage. It has slots (for the CD), holes (for the keys, screen, cables), seams, and so on.

Indeed, the electric field radiated by the antenna is intercepted by the case. This electric field causes RF currents in the case, because the charge carriers (electrons) in the metal want to find the lowest possible electric potential. If the case has no holes and is very conductive, then they are able to rearrange completely such that the electric field is cancelled.

But if there are holes, the RF currents can't go through it. They have to go around, and this results in a less than complete cancellation of the electric field. The charges keep moving around the hole as the antenna's field changes, and you end up with moving charges (current) held apart by the hole (voltage), just as there would be in an antenna. Consequently, some of the energy is re-radiated.

In fact, if the hole is the right size, it can be just as efficient as an antenna. It's called a slot antenna. For some applications, RF engineers will intentionally create them because they are more convenient to fabricate than some other more familiar antenna, like a dipole. Slot antennas also have consequences for PCB designers, who must avoid unintentionally creating slot antennas (by introducing breaks into the ground plane, usually) which would cause their device to fail EMI requirements.

So there you have it. The case doesn't always block RF radiation. As Some Hardware Guy says, the product engineers just need to find a clever place to stick the antenna and ensure it's properly tuned.

In theory, a thin slot in sheet metal is equivalent to a wire of the same length. The designer still needs to figure out how to feed a slot antenna from a coax feedline and preferably maintain a half decent impedance match... Seen this in some mobile phones, not likely in laptops.

That said, in my experience, high-end phones with a metal chassis don't cope very well with low signal reception conditions. Not as well as the cheap plastic handsets :-) And, considering that dual-band/multiband antennas don't tune very well in either band, I find it insane that some phones support several frequency bands and can receive GPS at the same time...

Not the answer you're looking for? Browse other questions tagged wifi antenna or ask your own question.