Biasing of CE amplifier with emitter resistor for specific gain

I am trying to design a Common-Emitter amplifier to the following specifications:

Using a 2N2222 BJT transistor and the following CE configuration: 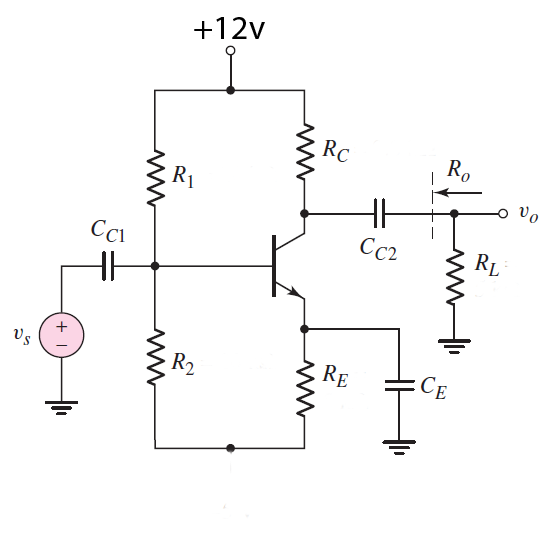 I began my design by picking a maximum current. I want to keep that low so I choose \$2mA\$ and plot the IC vs VCE curves for this specific transistor in a spice simulator:

Choosing a point half way on the load line for symmetrical swing, I obtain:

Now I would like to design my bias network \$R_1, R_2\$ to enforce the bias conditions above and also give a gain of 50. The voltage gain expression is given as:

Solving for the input resistance:

Some algebraic manipulation results in

I write a loop around the Emitter-Base loop as:

Simulating the circuit and running a dynamic DC analysis shows that the bias conditions are enforced: 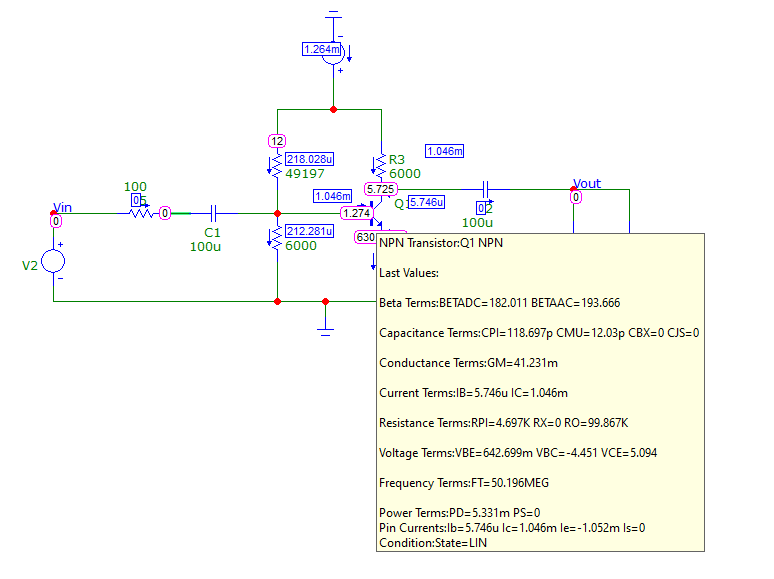 However I am confused because when I work out \$R_i\$ as:

And furthermore the thevenin resistance of \$R_1, R_2\$

I would expect these values to be the same as what I worked them out to be previously from the voltage gain equation (\$92 \Omega \$)? In simulation this method seems to work however I can't understand how the input and thevenin resistances have seemingly changed value. Could anyone explain what is happening here?

I'd also be interested to know how more experienced designers would approach this simple design problem. I find that my courses at university are very theoretical and so I tend to over complicate the designs. In practice I suspect that designers tend to take more of a heuristic approach to circuit design rather than solve equations like this.

[For best design, add a 2nd Re in series with first R, with no bypassing. These 2 Rs allow stabile biasing and stable Gain. And thanks to LvW for error detection and system thinking.

Input Resistance will be parallel combination of R1, R2, and the transistor Rin.

The transistor Rin, assuming excellent bypassing of Re, will be Beta/gm where gm is the transistor transconductance.

[by the way, the method I use here took me years to "invent". There is no magic in biasing Emitter to 1/3 VDD and biasing collector to 2/3 VDD; and setting Rb1 and RB2 to 10X/20X the Re and Rc, just that you can mostly ignore the beta and the beta variations. In starting out, I used the single_resistor from base_to_VDD as do most newbies; then I learned about Re stabilization for Ie and for gain. I think the GE Transistor manual I was given did show Re stabilization, but I had to slowly learn all the tradeoffs. And even later I still had to learn/visualize the energy sucking o C_Miller_Effect.]

Your instructor is letting you immerse, and learn quickly. Hang in there.

For a gain of 50X, using a single transistor, with resistive load, first let us be sure we can achieve that 50X.

The maximum gain a single bipolar can provide, with resistive load, is

Bias the transistor emitter to VDD/3. Bias the collector to 2/3 VDD.

This is very stable biasing.

Bias the transistor to 10mA (why not? power is free).

With 130 ohms as Rcollector, we will mostly ignore the Rload value in computing the Voltage Gain.

At high frequencies, that charge consumption will suck up lots of input energy.

I ignored any source impedance.

If you must have a high Rin, then consider a Darlington. Which also gives you some flexibility about handling C_miller_effect.

Not the answer you're looking for? Browse other questions tagged amplifier biasing or ask your own question.

4
Help With Simulating Common Collector Amplifier In PSPICE
4
What is the way to calculate the Voltage gain of cascade common-emitter BJT amplifier?
1
Effect of emitter capacitor in common-emitter amplifier
5
BJT Voltage Divider Bias Circuit problem
5
How to derive the precise gain of an NPN common emitter amplifier without emitter degeneration?
4
Cannot predict closed-loop gain of this amplifier
0
Why is the voltage gain in the simulator so different from the expected gain?
0
Why is there a minus on the voltage gain of a common emitter?