Why is the MCP23S17 device getting too much hot suddenly and randomly Raspb 4A?

Circuit is a Raspberry Pi 4A SPI master node talking with one MCP23S17 device: datasheet. I'm testing the singlest circuit version in a protoboard.

At the end of the wire it could be contact between out_1 wire and in_1 wire or not. So in_1 wire could be reading from out_1 pin or being not connected to anything ('Z' state/open circuit).

Input pin is configured with internal R pull up in order to read VDD when not connected.

The circuit can be seen at the following pictures, when reads '1': 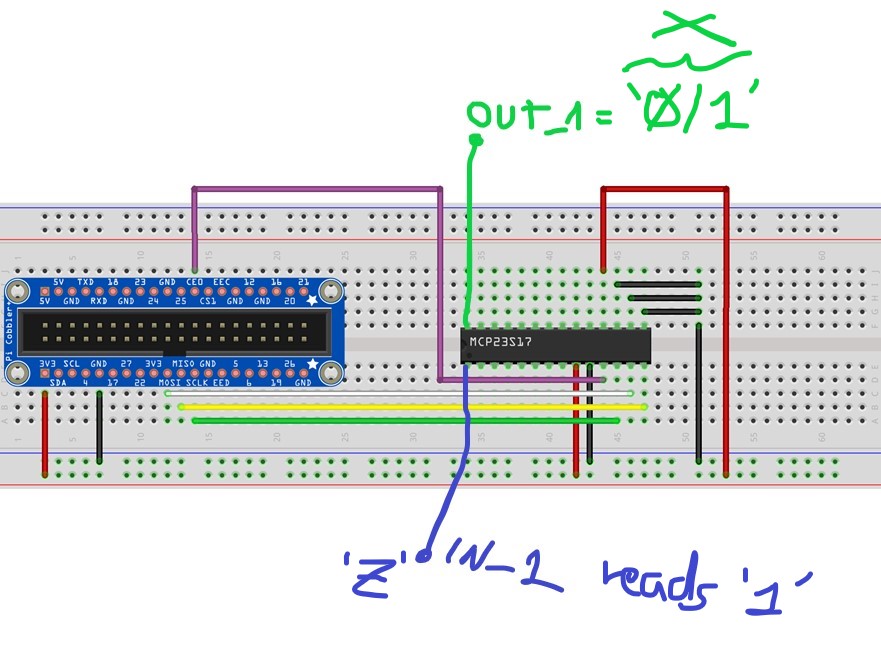 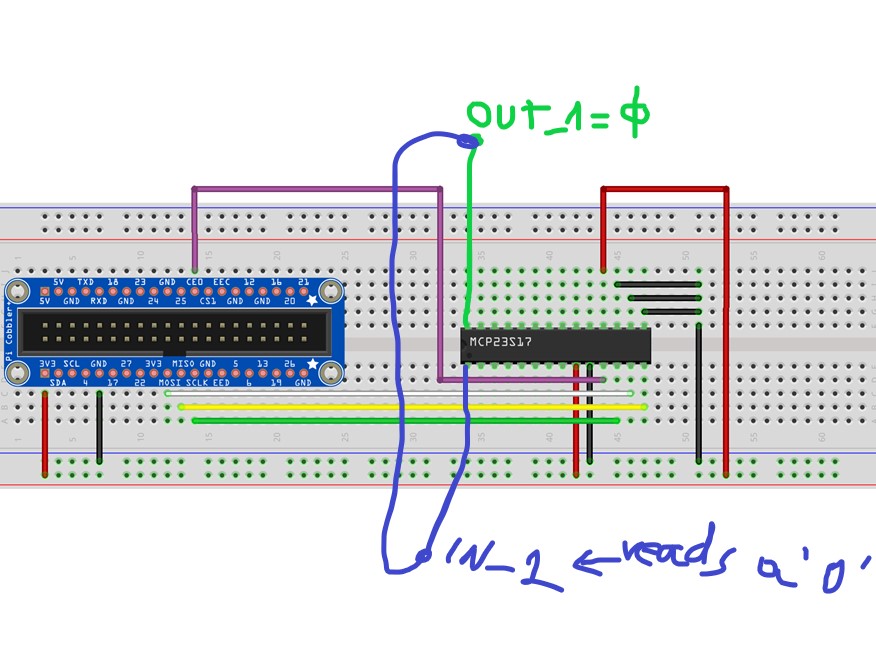 This circuit is working at 1Mhz, as you can see MCP is fed with Raspberry supply pins. They don't need extra capacitors because Raspberry provides 100nF at their 3.3V and 5V pins.

At pictures it can be seen that Reset and Address signals has no R pull up, because they will be by the moment to VDD or GND constantly, with any value change. Resistors will be added to the final design where Rst will come from another digital source, instead of VDD.

Application works making thousands of writing/reading in a loop.

It can be working fine during most of the time, during hours.

But suddenly the device is reaching too much temperature, I think it's closer to get burn. Here, reading fails. Even the two contiguous GPIO pins starts changing its input values when they are not connected to anything.

When it ocurres I can see how the multimeter reads 2.8v instead 3.3V from VDD Raspberry pins. So, it seems to be an extra current consumption but I don't know from which pin and why.

This situation stops if the device is reset. After making a reset, the temperature falls to normal and it works fine.

What can be happened? Why is the device getting this consumption? Would does it need to put resistors at address or reset pins? 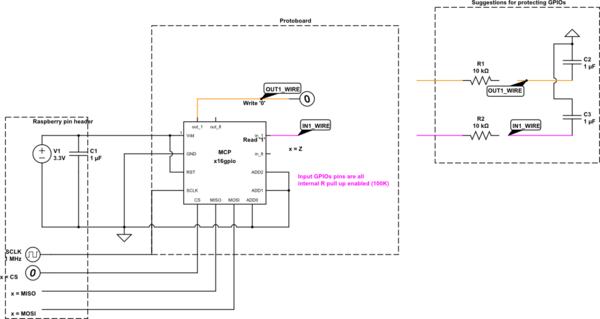 Added after posting and some new tests:

I have realized when overcurrent starts. By the moment during a week under test I can say when it happens: when I handle wires and push one of them into the GPIO input pin hole. My python control sw gives me feedback about when an input toggle its input value. I can see by screen how when overheating has started, a long toggle-switching is produced before get the stable. As long as toggle time is, then so closer to start the undesired behavior.

I have done a hw debouncig to an input with a 1uF capacitor and toggle has minimized until almost being completely avoided.

I don't know yet if this could be the optimal or final solution. But I have realized when overcurrent starts at my circuit.

By the moment during a week under test I can "say" when it happens: when I handle wires driving other logic state value and push one of them into the GPIO input pin hole.

When overheating has started it has been showing how a long toggle-switching is produced before get the stable/final value. As long as toggle time is, too closer to start the undesired situation system is. That makes sense with CMOS literature about switching inputs and overheating.

I have done a hw debouncig to an input with a 1uF capacitor and switching has minimized until almost being completely avoided. But it seems not to trigger the overconsumption. I have not any more overconsumption after debouncing. At least one of the causes here seems to be this.

And so according with this discovering:

It seems to mean that I should be using a number of capacitors = 64 (1 capacitor for every GPIO pin on my board). At this point I don't know whether 64 capacitors is too much or not, it is good or not, etc. I don't use to see examples with one capacitor at every MCU GPIOs that will have more switching value time than my design.

I'm now working on this point.

Not the answer you're looking for? Browse other questions tagged circuit-design raspberry-pi temperature gpio mcp23s17 or ask your own question.

1
Do the MCP23S17 GPIO pins need protection against latch up ESD within this circuit?

4
Measuring almost 1 volt between Raspberry Pi input pin and ground, why?
1
Using Raspberry Pi to read open collector outputs from tally connector
1
Raspberry Pi GPIO Output On Startup Safety
0
Does a Mcp23s17 output pin keep the value after being unselected?
0
What about MCP23S17 GPIO pins output ports being also used to be read by input pins?
0
ULN2803 behavior when its output is not connected to any load in this circuit?
1
Do the MCP23S17 GPIO pins need protection against latch up ESD within this circuit?
2
THM3060 RFID reader setup issues
0
How to receive input signal on Raspberry pi GPIO from transistor emitter