I am trying to toggle the power on a 24V LED strip using a IRFZ44N MOSFET. I am able to power the LED strip and vary the current using different PWM duty cycles, but the MOSFET gets really hot, especially when the lights are "dimmed", i.e. 0 < duty-cycle < 100. With duty-cycle = 0 there are no heating issues though.

The LED strip is rather power consuming, 24W/m, and I'm utilizing 4m so i figured a 4A power supply would suffice. The idea is to toggle the voltage, ~10V, on the T3 MOSFET gate by regulating the current at the base of T1 and T2. To my help is a Raspberry Pi 4B, using 3.3V GPIO, the 12V input is 1A 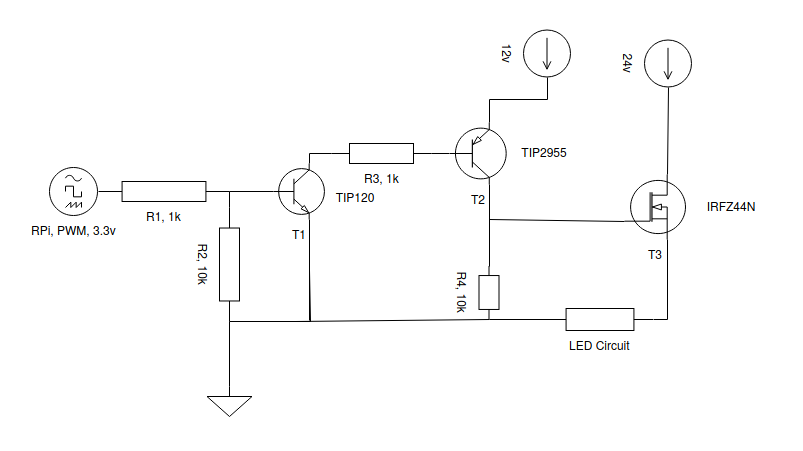 I am not an EE and apologize if there is anything unclear about the above schematic, would be happy to elaborate.

I found a similar post here on SE, which made me suspect the PWM frequency and T3 input voltage: I've tried many different PWM frequencies, from 1Hz to 10KHz, and also measured the voltage on the T3 gate, which according to my multi-meter is around 12v, 10V+ should be enough from what i understand. I didn't quite get the points they made about capacitance, but i have tried to lower the resistance on R4, which seems to delay the heating issue, but not fix it.

The MOSFET is acting as a source follower and therefore, the voltage it develops at the source is somewhat less than the voltage applied at the gate. So, if T2 collector can produce (say) 12 volts then T3's gate receives 12 volts and T3's source will be a volt or so lower at 10 or 11 volts (maybe even lower with some FETs).

Solution: move the LEDs to the drain and connect the source to ground and now you will fully activate the FET and get 24 volts across the LEDs.

Not the answer you're looking for? Browse other questions tagged mosfet pwm raspberry-pi led-strip or ask your own question.

6
why mosfet is getting very hot?