I am trying to design a PCB based around the STM32F446RE microcontroller. I looked at the schematic provided by ST for their Nucleo-64 board, and physical placement of the ferrite bead on the board.

The ferrite bead they use is a Taitec FCM1608KF-601T05. Which is placed on the VDDA line (pin 13). They do not have a ferrite bead anywhere else. 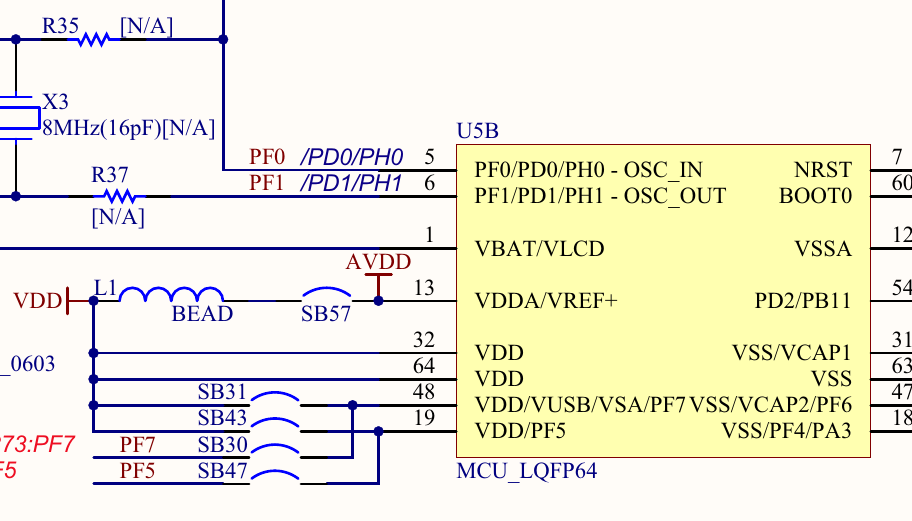 I have seen a few designs done by others, and they seem to place the ferrite bead at the input side of the their 5V linear regulator.

In other words, ST seems to concerned primarily with noise coupling on to analogue measurements and have placed the bead after the 3.3V regulator to the MCU.

Other designs seem to be concerned about noise getting into the overall circuit.

The ferrite bead I would be using is Würth Elektronik 74279265 which has better DC resistance and impedance characteristics over a wider frequency range.

This will attenuate the noise before it can travel through wiring, to avoid emissions by the wiring. These emissions (egress) can cause ingress or interference within the device itself and into other devices.

This will reject ingress captured by any wiring and connectors that lead to these sensitive inputs. Keep it close to the inputs, to cover as much input wiring as possible.

For sensitive analog inputs, though, you want to put a filter close to that input. This can be thought of as because the entire trace leading to it is the noise source you're concerned about here; you just want to isolate that antenna of a trace from the input.

I found this post when looking for a similar answer, and am reply months later in case this would help someone else further down the line.

My research also located this excellent discussion of the problem by Kella Knack on the Altium web site: Everything You Need to Know About Ferrite Beads The relevant parts of that analysis are:

Filters need TWO components: a series (here the FB) and a shunt (which is missing here).

For that bead to be useful, add 1uF at AVDD.

There is no "best" position to place a ferrite choke. Placing it on the input or output of your switching PSU, or on a pin input of another IC achieves different things. You should assess the need for any of these chokes individually, and implement as many of them as you believe will benefit your board.

Input of PSU: Reduces noise generated by the PSU onto the power input net, for example a 24V rail. Can be useful if for example a device is using the same net directly without a dc/dc, and it does not have a high ripple tolerance.

Output of PSU: Will reduce the overall ripple on the output net, which might be required for some components and reduces EMI.

Input of IC: Will both smooth out the net for the specific pin, which is often necessary for many MCU VDD pins (usually require less than like 20-50mV ripple), and can also prevent ripple from the pin to the incoming net in cases where the pin belongs to a very fast switching mechanism like an internal PSU, oscilator etc.

In your example I believe the placement near the MCU pin is done because that specific pin has a much stricter ripple requirement than the other pins using the same net. Placing the ferrite there will give a better ripple reduction than placing it on the PSU output, because placing it on the PSU output would not attenuate ripple generated by other MCU pins nor EMI emitted onto the net between the PSU and the MCU pin.

Not the answer you're looking for? Browse other questions tagged pcb-design stm32 emi-filtering ferrite-bead or ask your own question.