Why is my fan circuit with SSRs short circuiting on power down?

I am attempting to build a "smart" ceiling fan for a home automation system I have created and added to over the years. However, this is the first time I've tried controlling a fan motor and the first time I've used solid state relays (SSRs). My research (and now experience) shows me these two elements can be a bit tricky.

Note: I am a software developer with no formal electrical engineering education so you will forgive my ignorance when it shows.

In brief, the system powers on fine and can be controlled by my software running on a NodeMCU successfully. It can do this for several days. However, at some point, during a power-off cycle, the circuit will short and blow the fuse. Once this occurs, 4 of my 8 SSRs will be permanently closed.

I am very confident the short is occurring during power down (i.e,. while turning off the wall switch that provides 120v to the black (#6) wire as seen in the attached SmartCeilingFan schematic). This is true because when I had it on my bench testing it, I saw a blue flash from the fuse when I turned off the system after a successful test run. After that, the SSRs mentioned below were permanently closed. (This has occurred on three different prototypes I have done so it is clearly repeatable.)

Troubleshooting I have done: 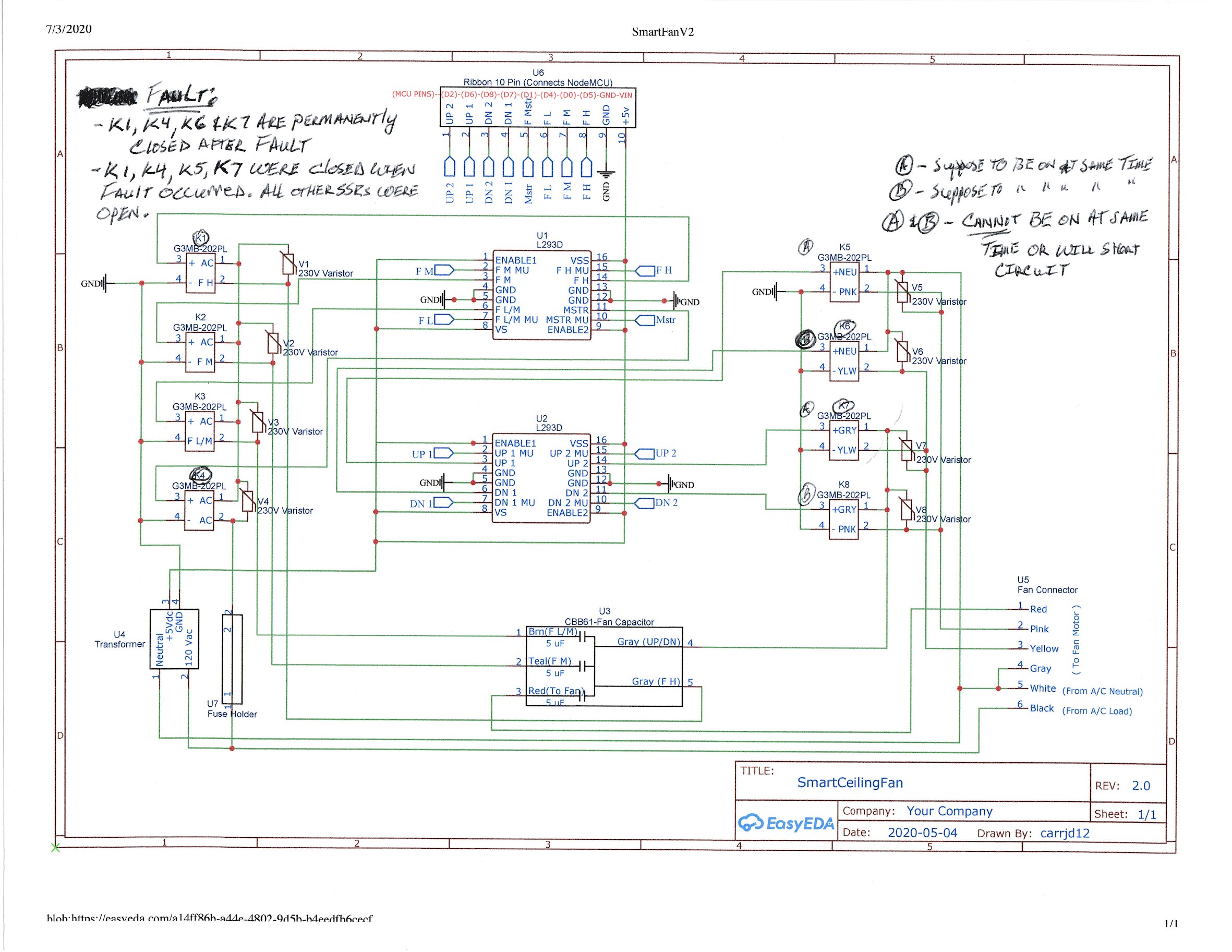 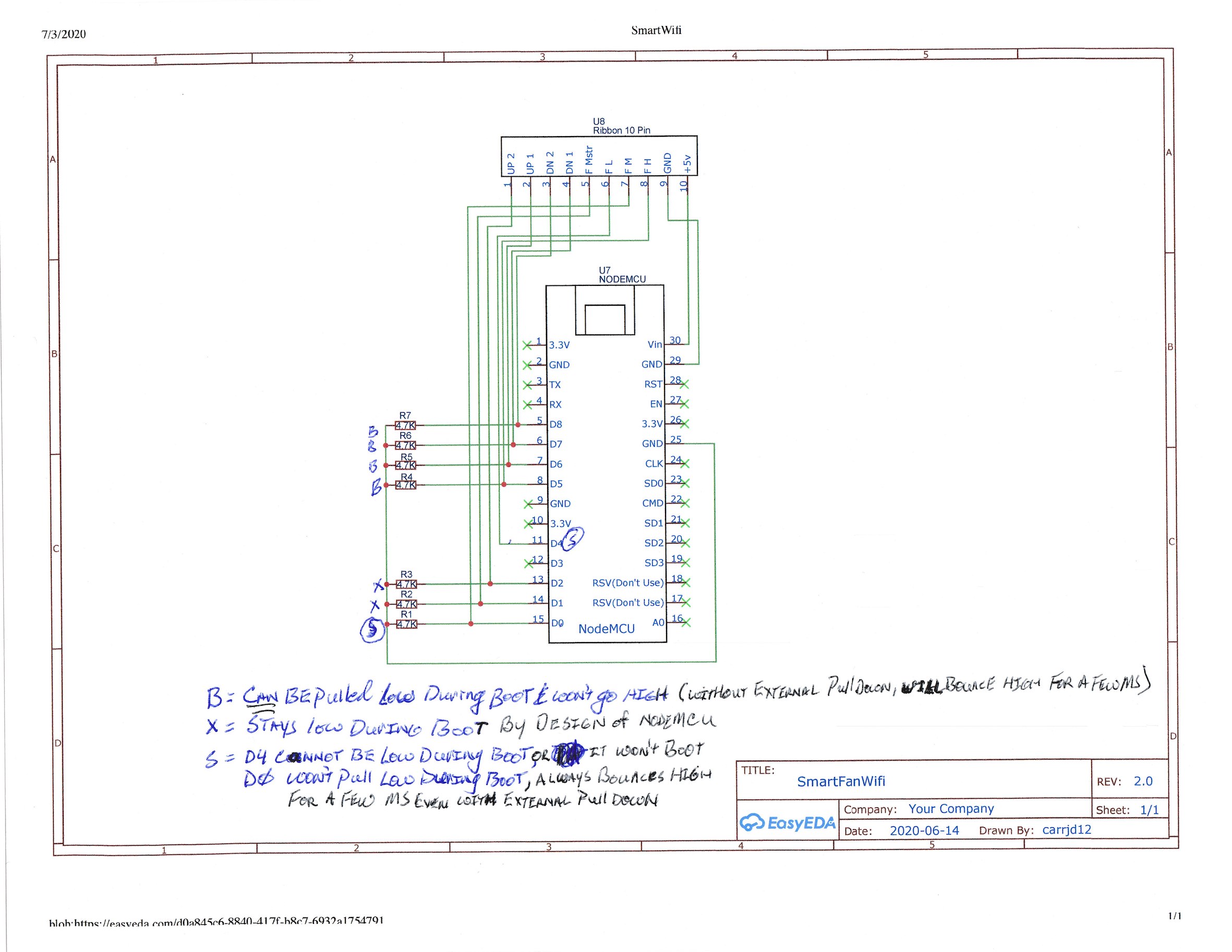 I notice your hand-written notes on the schematic. 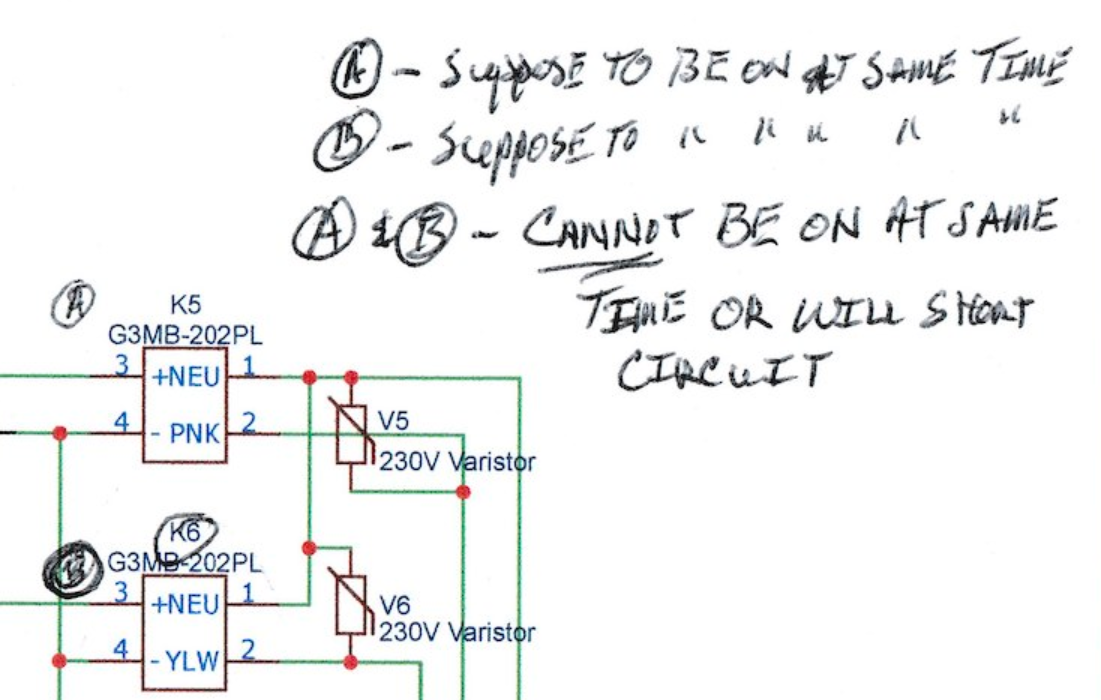 Figure 1. Details from the schematic.

I suspect that on switch-off that you might be getting a high \$ \frac {dV}{dt} \$ (very sudden rise in voltage). Triacs can be turned on when the voltage across their MT1 and MT2 terminals rise suddenly. It may be that this is turning on A and B simultaneously and shorting the motor windings as indicated in your note. This in turn may cause high current to flow and destroy your triacs. You'll need the appropriate snubber for this.

A thyristor or triac will not turn off until the current through it drops to zero. This means that the relays can be on for almost half a mains cycle after you remove the control signal. Introduce a delay of at least 10ms-20ms between turning off one relay and turning on another if having both on causes a short.

Only 2 answers come to mind:

You missed rogue On signals on power down. Possible if you searched for them with motor disconnected and back EMF spikes are source of rogue on signals

Voltage spike on mains disconnect are not dampened enough by varistors.

Not the answer you're looking for? Browse other questions tagged motor short-circuit solid-state-relay nodemcu or ask your own question.