I tried hooking up a Raspberry Pi (+Hifiberry needs 12 V to 18V input voltage) to my classic car (to be used as music player, radio, BT speaker, no screen, only 2 rotary encoders to navigate through spoken menu). It functions great when connected to an AC/DC convertor connected to the mains, also built in the car when connected to the car battery with the engine off, but with the engine on it starts to behave strange (cutting out music, not responding correct to the rotary encoders). When I turn off the engine all problems dissapear.

As a test I tried it built in the car, with running engine but with power from the AC/DC converter from the mains (so not connected to the car battery/ground at all) and then all is OK.

I already had a buck/boost convertor in my configuration to provide a stable 12V during start and charging from the alternator. I measured the voltage with running engine and its stays at 12V so the buck/boost convertor is working ok. I also did an additional test with a higher output voltage from the buck-boost to 16V and let the Hifiberry regulate it from there, but that also didn’t solve the problem.

So my guess is that the DC power from the car with running engine is not clean enough for the Pi and electrical noise caused by the engine is messing things up and apparently the buck/boost isn’t correcting that either. At the moment I do not have an oscilloscope to measure the signal to see what is going on.

I did find this wiring scheme suggested to use in a car environment (other type of voltage regulator): 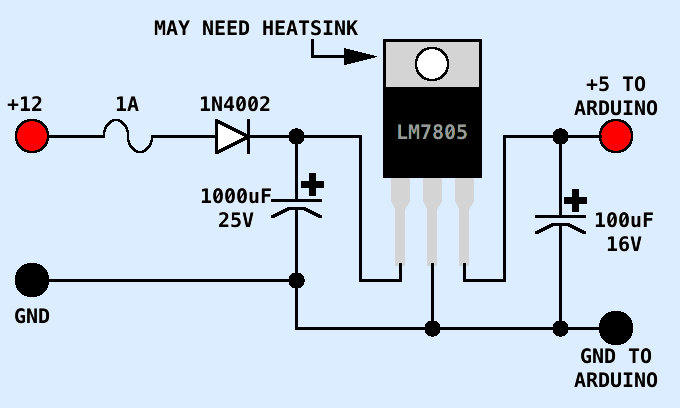 I think I will try to use the large capacitor this way but I’m wondering why there is no resistor in series with the capacitor (both in between positive and ground) to limit the charge current. Wouldn’t this scheme lead to a very high charge current at t=0, blowing the fuse? Or would the time be too short for that?

Any other suggestions what could be causing the issues with the audio system?

Thanks for your time.

Ok, some time has passed by now and I got it working. I thought to share my modifications with you, so maybe somebody else in the future will find the answer for his/her problem here on this page.

The changes I made to the system:

I installed it all yesterday and had a great drive with a perfectly working music system. Life is good.

Thanks all for your time to help me out.

Not the answer you're looking for? Browse other questions tagged raspberry-pi noise automotive or ask your own question.

2
Arduino project, powered by car electric system
0
How the Current Flows in a Car?
0
Buck Boost Circuit for Automobile starter circuit
1
DIY car audio noise when the source device is charging from the same power source
4
How to reduce noise caused by inverter?
1
A circuit to fade-in and -out LEDs (DRLs) only when the car engine is running?
5
How to detect if a nearby parked car has started engine?
0
When jumpstarting a car, why do I need to wait a bit for the bad battery to charge a bit?
0
Automotive 3.3 volt supply that can survive engine start