LiPo LED/Fiber job not working correctly after plugged in

I'm putting LEDs and fiber lighting into a ship model. There's not a ton of room, but I found I could fit two LiPo (3.7v, 2400mAH, DTP 605068) Batteries in series with a single two-prong connector. The connector is plugged into a "SparkFun LiPo Charger Basic-Micro-USB (PRT-10217), and the +/- terminals of the charger board run to the circuit. Now for the problem.

Everything lit up really well and stayed lit up the first time, but whenever it gets plugged in the battery stops powering the circuit. Not only that, but when plugged in to a micro usb to any power source only part of the circuit comes on at full brightness (The branch with the 2red and 1 white LEDs), the rest of the red leds glow very dimly (except one 2 red branch that doesn't light at all). I suspect most of the white LEDs are lighting dimly, but as they are lighting bundles of end-glow fiber, it wouldn't be too obvious by the outside of the ship.

However, I've found that I could "jump" it by briefly connecting another battery of the same voltage to the leads off the LiPo charging board. When I do that the installed battery runs it just fine, turns off and on and keeps powering the whole circuit, until it's plugged in again, then the problem returns. I'm really hoping it's not the charging board that is the problem as getting it back out of the model will be a pain in the butt. Thanks in advance for any help! 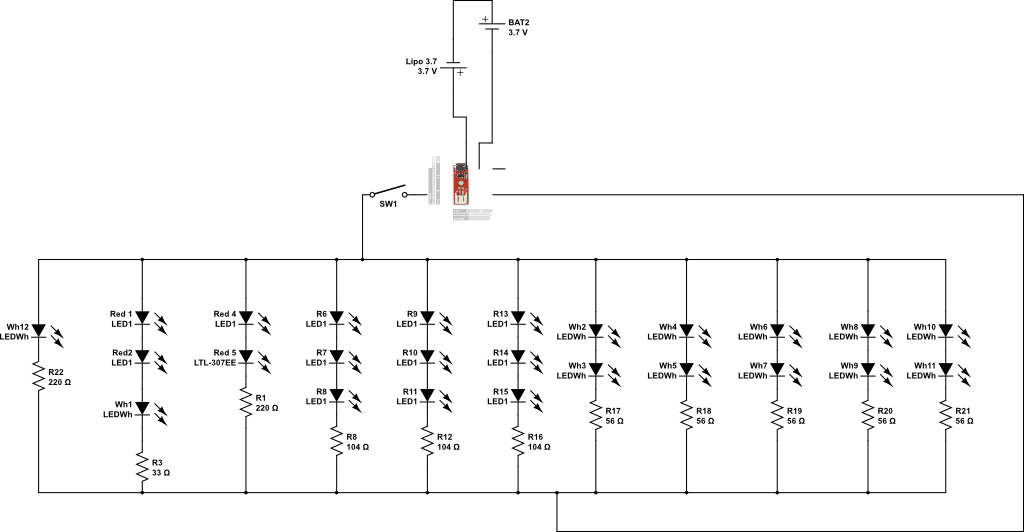 Your description isn't clear, but given the basics of the charger and 2 batteries, and usb source, the problem is clear. You aren't using the right setup. Your charger is for a single 3.7V LIPO, A 1S charger. You have 2 batteries in series, 2S, and 5V is not enough to charge a set of batteries that have a 6.4 to 8.4 voltage range. The batteries have a protection circuit, they are likely going into ULVP mode, or ultra low voltage protection mode so it doesn't work until they start getting charged up to the right voltage (by "jumping it").

The 5V or less output from the charger when connected to USB would power some of the led sections, but obviously cannot fully power 2x 3.2V white leds in series. The 2x red leds will light up fairly bright, and the 1x white would, the 3x red will be dim, but the 2x white and 2x red + 1x white would not, if at all.

Solution, replace the two batteries with a single lipo AND replace all the led branches that won't work directly off the single lipo. OR replace the charger board with a 2S controller (like this, no personal experience https://www.mouser.com/new/dfrobot/dfrobot-dfr0564-usb-charger/ which has a built in boost circuit from usb 5V), and you may still want to double check the led resistor values based of the real voltage range of 7 to 8.4.

Not the answer you're looking for? Browse other questions tagged led battery-charging lipo or ask your own question.

6
Add a rechargeable LiPo to Arduino micro project
1
How to fully shut off an LED indicator when used with a Smart Switch?
1
How to connect multiple 0402 leds to an Arduino for a 1:87 model
1
MCP73871 Low Charge Current
1
LED Lighting not working