I am trying to make a n-channel mosfet switch a load from a high voltage (250V). I am using the n channel C2M0280120D mosfet. the circuit looks something like below: 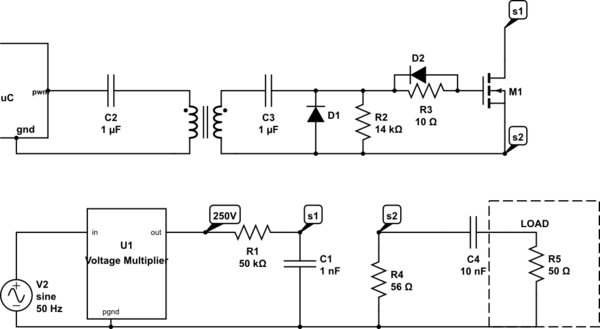 so in this configuration, when ever the uC pulse rises (uC generating pwm between 5V and 0V), the Vgs on M1 would rise too. I measured the Vgs on M1 and its a pulse at 5V peak for 250ns. the datasheet states that maximum threshold voltage is 4V, so one would assume this would be sufficient, but when I measured the source of M1 (node S2) against power ground (pgnd), it is a pulse but with a peak of only 30 odd volts, instead of 250V.

I thougt it might be the case that the mosfet is not properly overdriven and it still is in its linear region, so I tried chopping a 15V supply to make the gate signal with a higher amplitude, this time my Vgs is a pulse with 10V peak. The circuit is shown below: 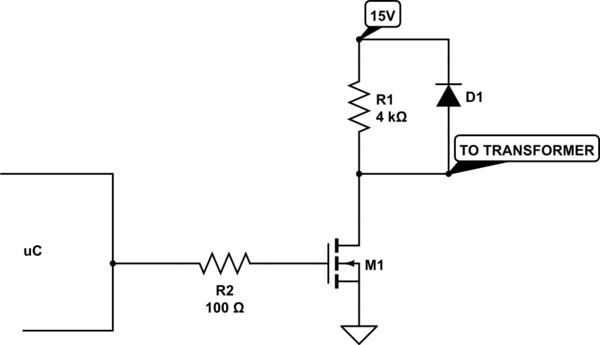 I also put a 1uF cap (as it is in the first schematic) just before the trasnformer, but I still get less voltage than expected on node S2. (waay less for that matter.)

so if this is not for the larg resistance between drain and source (since it is turned on properly) what else could be the issue?

Thank you in advance for your time.

Just look at the graph in the MOSFET data sheet. This one: - 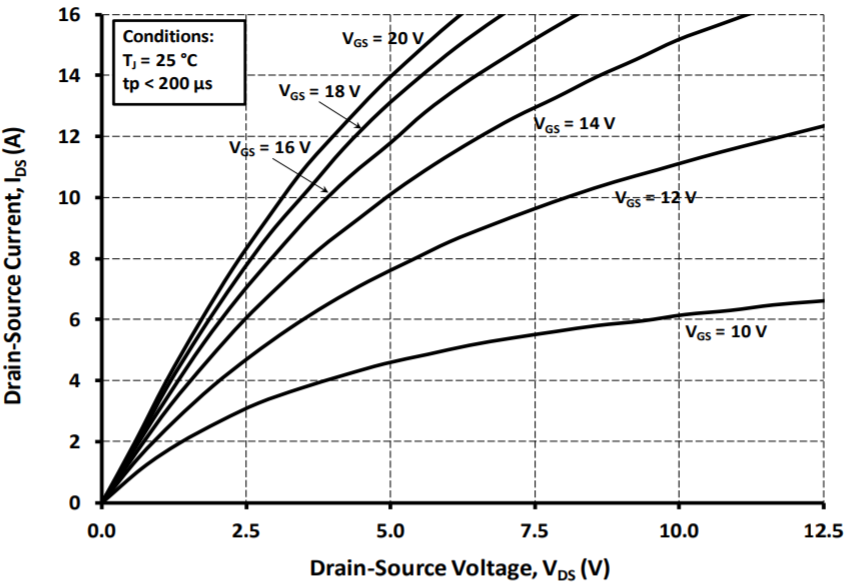 With 10 volts on gate w.r.t. source it's barely breaking the sound barrier in terms of performance and it's not even listed for a \$V_{GS}\$ of 5 volts.

the datasheet states that maximum threshold voltage is 4V, so one would assume this would be sufficient

Always best to check the graphs.

Not the answer you're looking for? Browse other questions tagged mosfet transformer switching gate-driving or ask your own question.

3
Purpose of anti-parallel diodes in isolated gate driving circuit?
0
Can I drive MOSFET gate with an isolated voltage source?
1
Switching High-voltages with p-channel MOSFET
1
Mosfet switching
1
P-Channel Mosfet Gate Drive Topology with 20V Vgss Protection?
1
High Side Switching Inductive Load with MOSFET
0
Question about N-channel MOSFET turn on Voltage
4
Solution for how to drive a P-Channel MOSFET when Gate/Source voltage is too low?