STM32 - How does analog configuration of MCU pins affect the power usage? 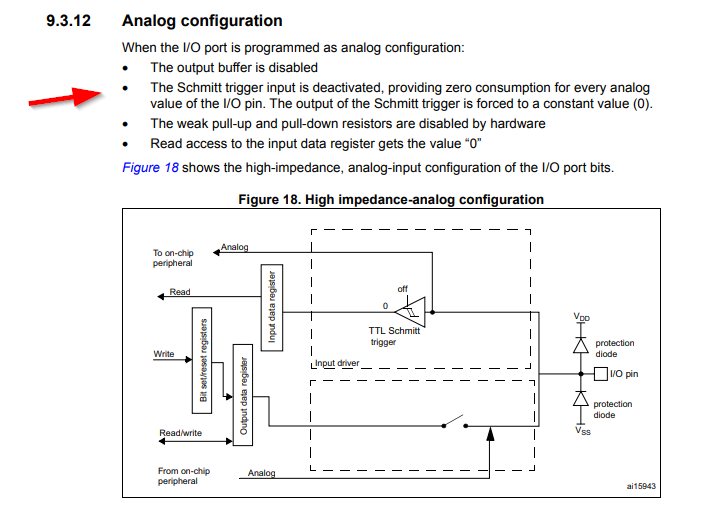 This apparently can reduce the typical current draw from uA to nA. It's not clear if they make assumptions about whether the pins are tied high, low or floating for these comparisons.

For minimum propagation delay near the 2 thresholds, a Schmidtt needs a very fast amplifier built into the circuistry. Pleasantly, a simple two_FET inverter (Nchannel + Pchannel) provide the speed, but will consume LOTS OF CURRENT near the thresholds. Thus SLOW inputs (slow ramps) or floating inputs, will waste lots of current. Unless you chose to disable the input.

If a pin would be externally held to the positive or negative rail, it will use the same trivial amount of power when configured for analog mode as for digital mode. Likewise, there would generally be negligible extra power consumption from enabling internal pull-up of a pin which would either be externally pulled high or disconnected would draw no current, or an internal pull-down of a pin that is externally pulled low.

In the case of a pin which does not have internal pull-ups or pull-downs, enabling a digital input will have negligible effect on power consumption when the input is near a rail, but may increase power consumption when the input is near the switching point. In many cases, digital inputs will be fed into an inverter whose output is pulled high when the input is low, and pulled low when the input is high. Oftentimes, there will be a voltage between the high and low levels which is high enough to partially turn on the pull-down transistor but also low enough to partially turn on the pull-up transistor. Having both transistors be partially on can sometimes substantially increase current consumption, though input circuit design can trade off worst-case current draw for response time (if an input doesn't need to switch quickly, it can use small transistors that won't pass much current even when turned on), and most microcontrollers strike a balance which will result in a current increase which is measurable, but not so large as to pose a meaningful risk of overheating.

Not the answer you're looking for? Browse other questions tagged stm32 power-electronics low-power stm32cubemx or ask your own question.

6
STM32F103 low power mode (stop)
7
Toolchains for STM32CubeMX IDE: what to choose from?
1
Dealing with different voltage needs on a battery driven low-power board
2
USB on STM32F107RCT and Stm32CubeMX
2
Number of PWM pins on STM32F072
4
How to achieve low power consumption with ATTINY85
0
How to choose UART maximum output speed?
0
How to debug a program using FTDI in STM32CubeIDE?
1
STM32F4DISCOVERY high power consumption in Standby mode