How can I prevent a non-rechargeable backup battery from inadvertently being charged?

So, I'm working on a design for a device that is to be powered both from the AC line (using a power supply module, for now at least), and a non-rechargeable battery pack (6 alkaline AA cells). The device has a rather low (easily submilliamp) standby current, but when fully activated, draws nearly 2A peak, irrespective of whether it is on AC or battery power. As a result, the typical approach of using a diode in series with the battery practically requires a Schottky to be used, and even then, losses are relatively high, on the order of 400mV for a 1N5821.

This is problematic due to the low battery threshold of the device overall being relatively high, so a 400mV drop atop that means that the low battery detection could be set off falsely. Furthermore, using a relay for switching between AC and battery is unattractive for reasons that have to do with both the size of the relay and the amount of control logic hackery that would be needed to provide for low battery monitoring in that case. Finally, the classical P-FET reverse battery protection circuit seems like it would not work correctly with 9V imposed on the source from an external power supply, nor will a switched power jack work due to the AC supply being a hardwired unit in this case.

Is there a better low-cost/low-parts-count solution to this problem out there than burning power in a diode or deal with the infelicities of controlling a relay? A full power management train is very unattractive for this application due to the simplicity of the rest of the circuitry, and while an individual ideal diode IC could be used, they tend to be relatively expensive and featureful parts that do far more than is needed in this application. (They're also small and thus relatively difficult to prototype with, but that's neither here nor there at the moment.)

As well as wanting very low voltage drop in battery backup mode, in the comments you say

the mains supply's output is 9V nominal, and I want to have as much of that available as possible

The obvious solution is to combine the power sources through 2 'ideal diodes' which have very low voltage drop. If a dedicated IC is not acceptable then you could use discrete transistors instead. The circuit is similar to the one shown here, but with higher value resistors to reduce quiescent current draw. 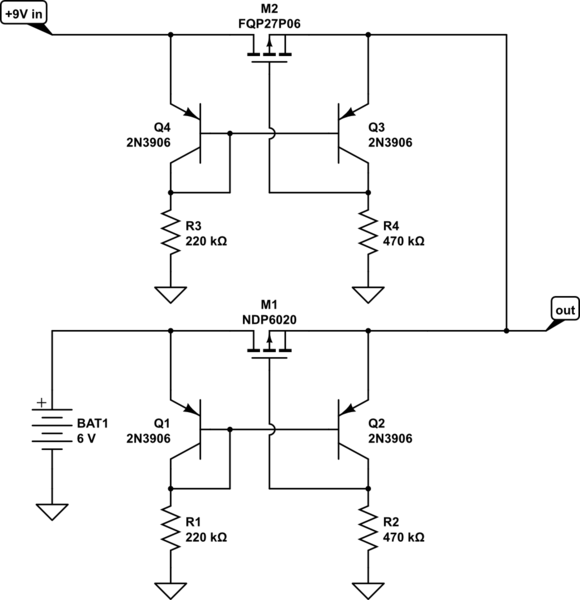 R1 (R3) is made a lower value than R2 (R4) to make the Base-Emitter voltage of Q1 (Q4) slightly greater than Q2 (Q3), causing Q2 to turn on and keep the FET turned off until the 'ideal diode' drops a small 'forward' voltage. To ensure that this works reliably the transistors should be thermally coupled and well matched.

For a one-off circuit you could use unmatched transistors, but test the circuit with a small load current and swap them around to get the highest 'forward' voltage drop across the FET. This should ensure that it turns off promptly with negative bias, though in your application it may not be critical.

Not the answer you're looking for? Browse other questions tagged power-supply batteries or ask your own question.

17
How might you use a LiPo battery as backup for mains power loss?
6
Relay not switching immediately from switching power supply to battery backup
0
How to add battery backup power source to a circuit?
1
Constant static thrust from a brushed motor powered by minimal weight rechargeable battery
0
How long can I power my device using a battery?
2
Using two diodes as a simple power supply backup switch