Ask Question
Asked 4 months ago
Active 4 months ago
Viewed 162 times
0
\$\begingroup\$
Closed. This question needs to be more focused. It is not currently accepting answers.

I have been learning about the basics of electronics, and reverse engineering hardware using UART connected to my computer. I find it interesting how I can access the busybox which is Linux and then make it perform cool and interesting new features.

My question is how consumer devices used to work before they all got shipped with Linux? I understand there may have been other operating systems for hardware, but I assume that there was a point where there was no operating system to control it, if we go far enough into the past?

how (did) consumer devices used to work before they all got shipped with Linux (?)

Linux was released in 1991 for x86 devices which had UARTs but now is ported to every CPU architecture from A to X which is almost everything under the Sun which followed the path of IBM's development of Unix which started in 1969. The Unix and alike history is shown below gives you an idea of the systems developed for military and business that later went into consumer products. 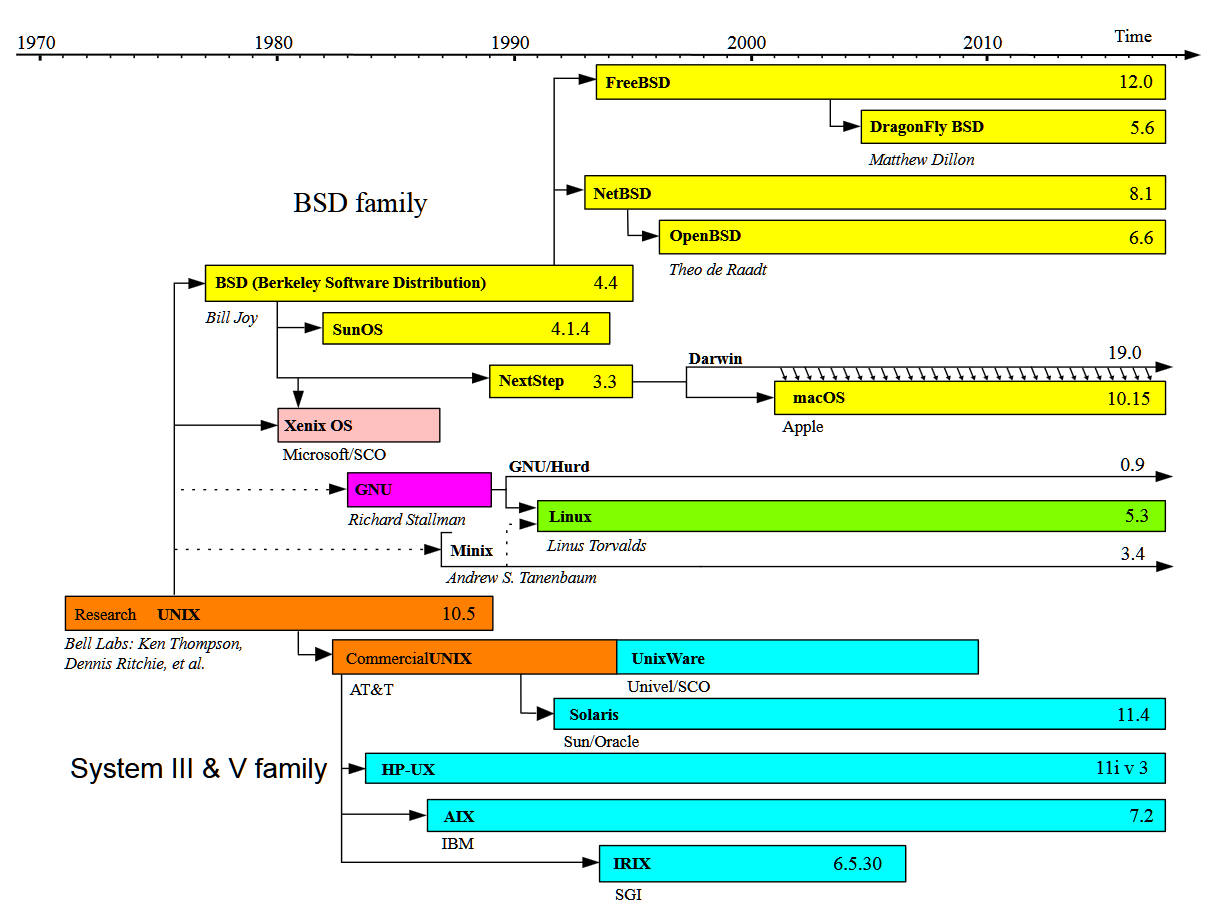 This is more of an OS genealogy of systems answer, some of which went into consumer items.

The consumer products, which I helped develop in the early 80's used a proprietary real-time OS with synchronous transmitters and some with UART's for exchanging data with the home computers on a CATV network, using an unused TV line (VITS) with proprietary data rates of 4Mbps used for streaming game files in '83 era to the Commodores, TRS-80, Apple ][ etc. It was demonstrated at a Vegas Cable TV tradeshow but failed to get any orders. (which is why no one has heard of it around then)

The first electronic items for consumers, with STATE maintained by digital logic, were 4_function calculators about 1975.

Before that, RCA TVs used ultrasonic remote_controls to rotate the channel_selection drum, with the mechanial drum position being the "State".

In a non_consumer system, there was the SAGE Strategic Air Ground Environment system, using numerous dual_redundant computer systems, all networked with phone lines between each other (in days before Internet, or even lasers to drive fiberoptic cables) and with phone lines to/from radar sites (such as BMEWS up in Greenland on land and on long-legged shallow-water platforms off Nantucket) to report incoming USSR bombers to the SAGE system, that then communicated to US air bases for vectoring USAF fighters to intercept the incoming bombers.

SAGE was designed and up and running in the 1950s, and continued operating until the 1980s. SAGE used custom-designed computers, that were ........ vacuum tube logic and spinning drums/magnetic-READ-HEAD state preservation.

Not the answer you're looking for? Browse other questions tagged pcb uart linux jtag small-electronics or ask your own question.

3
How to add security to your Product
1
Linux-friendly PICs to timestamp an intermittent 4 µs long TTL pulse
2
Courses about deploying Linux on embedded systems
0
Understanding a debit card reader through RFID
1
STM32F4 and SIM800L logic level
2
What is the role of the ROOT COMPLEX in a microprocessor system (PCI Express)
0
Connecting to UART port on smart BMS
1
Will diagonal PCB traces affect a sensitive CPU circuit?