I have this simulation. I tried to do a simulation for observing cross regulation problem: 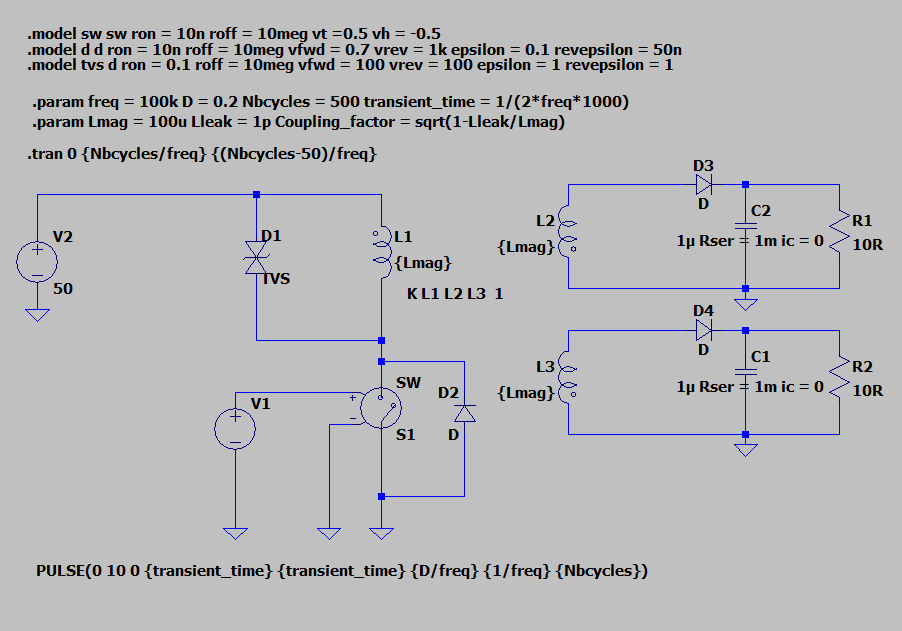 Here are the results:

The two outputs are equal and stable which is normal.

Nevertheless when I change the load on one secondary, it is completely unstable. I must always have the same loads to have stable outputs. I do not understand why it happens.

There are a few quirks you should know about simulators, in general: they are number crunching programs and, as such, they work with a finite underlying precision; in this case, double. Regarding precision, it is advisable to avoid too many orders of magnitude difference between adjacent variables (and not only) in the matrix solver. For example, using 10n = 10e-9 and 10Meg = 10e6 next to each other (in the .model for the VCSW and the diode) means the difference between those values is 1e15, which is sensibly close to 2.22e-16 in the case of double. Changing Ron=10m is a much better choice. If you're worrying that those 10m might influence negatively your simulation, don't, the values are small enough even for a real-life case; the influence will be so small it would not be perceived. But, if you're that worried, try 10u...100u, it should suffice even for sub-unity loads. The same for the diode's revepsilon, 50n -> 50m (epsilon and revepsilon model the quadratic regions for the diode, greatly helping convergence).

So the solution is to replace those three values. What you saw was the effect of an ill-conditioned matrix, which somehow worked in the first case, when the two secondaries were identical and, thus, the matrix solver could (presumably) make some simplifications, but not in the 2nd case, when everything needed to be treated separately.

There's one thing you should know: the coupling factor. You are explicitely using k L1 L2 L3 1, despite declaring Lmag and Lleak as .params (but you knew that, didn't you?). However, LTspice internally limits k to ±0.999'999 (whithin float precision). Your chosen values for Lmag=100u and Lleak=1p translate in a coupling factor of sqrt(1 - Lleak/Lmag) = 0.999'999'995, which is beyond the limit. This doesn't affect the simulation, just so you know that it won't work as you think it should.

Two last mentions: the number of cycles for the PULSE() source is not a mandatory parameter, so it can be omitted, and the .model card for the VCSW specifies vt=0.5 vh=-0.5, which means that the thresholds will be at 0 V and 1 V. But the driver swings from 0...10 V, which is useless for level=1. If the level is not specified, it defaults to 1, otherwise, the level=2 VCSW is never fully on or fully off, because the transfer function involves a hyperbolic tangent -- which also means that the derivatives are continuous everywhere.

Not the answer you're looking for? Browse other questions tagged switch-mode-power-supply ltspice or ask your own question.