Why does attaching the case to the PCB ground plane cause the audio to cut out on my cassette player?

I bought a NIB (new in box) cassette recorder on eBay recently but have had problems with the audio from the start. The issue was that touching the dials could cause the audio to crackle, go quiet, or cut out entirely.

It took some time and a lot of triage to narrow the issue down to something unexpected. The problem is with the screw that connects the PCB ground to the case. The reason it appeared to be the dials was because the PCB was being nudged slightly against this screw (it was very confusing to locate this problem!).

Here is an overview of the PCB: 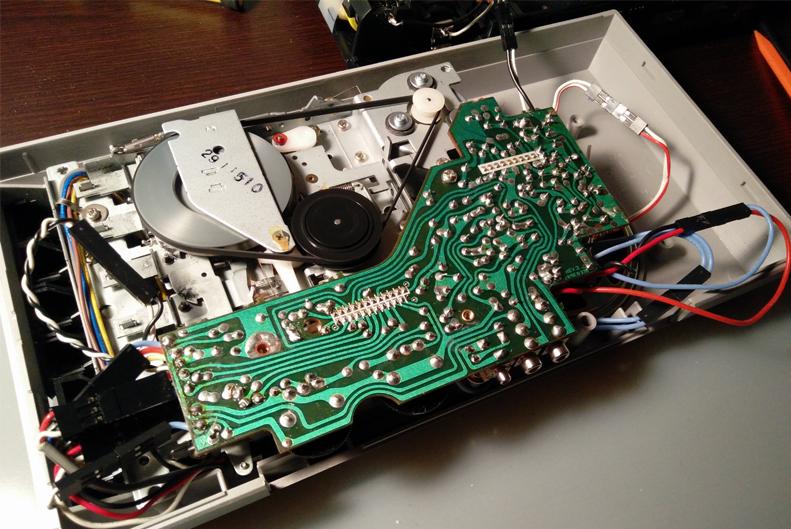 This is the point at which the PCB ground plane connects to the metal inside (the housing is all plastic): 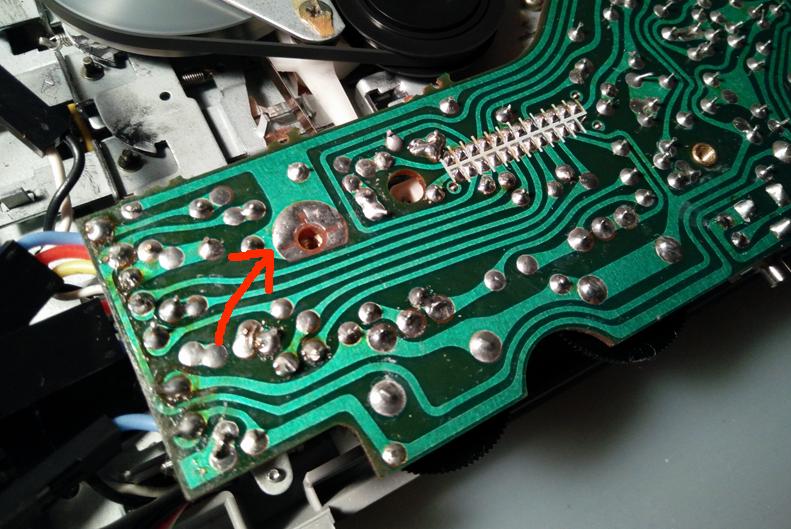 The issue is when I add the screw here and begin to tighten it. Screwing it in enough to achieve continuity between the case and the ground plane does not create any noticeable distortion. But if I continuing to tighten it then the audio will begin to crackle, become very quiet, and then cut out entirely. This only affects the audio signal; the tape continues to play as the motor spins. 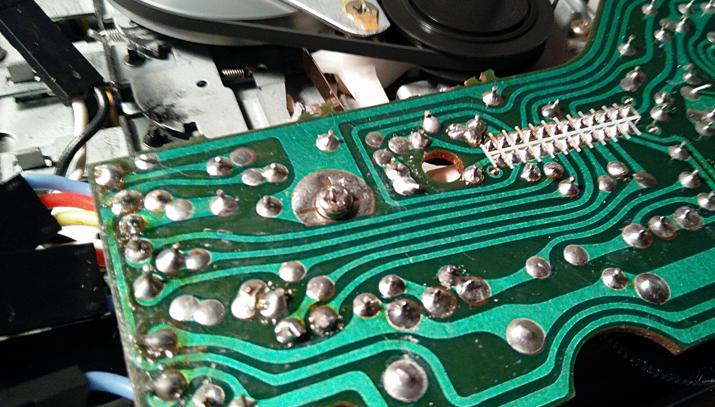 I tried adding a steel washer to ensure a good contact with the ground plane but it made no difference with the previous description: 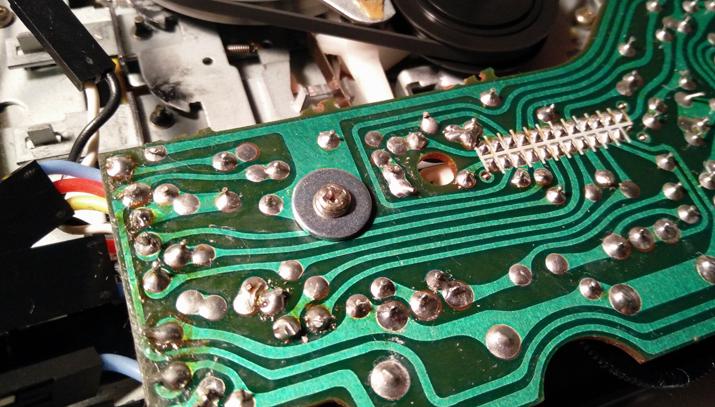 I made sure that this was not a fault of the PCB due to pressure or flex. I flexed the board manually and applied pressure to the location where the screw would be with my finger as well as the back of my plastic screwdriver. The audio is perfect without the screw being present but this also remove all continuity with the case: 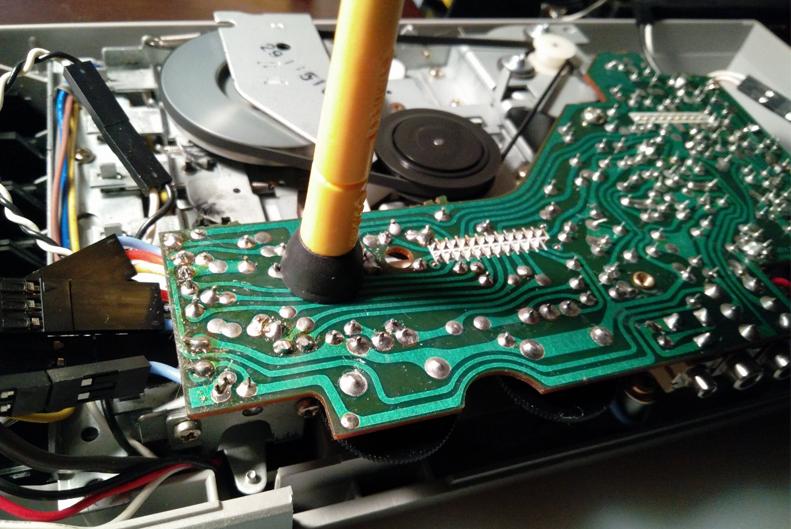 What I don't understand is why this only happens if the screw is tightened. Simple continuity with the case does not cause the audio to cut out. For example, the tape is playing just fine as I bright the ground plane with the case here: 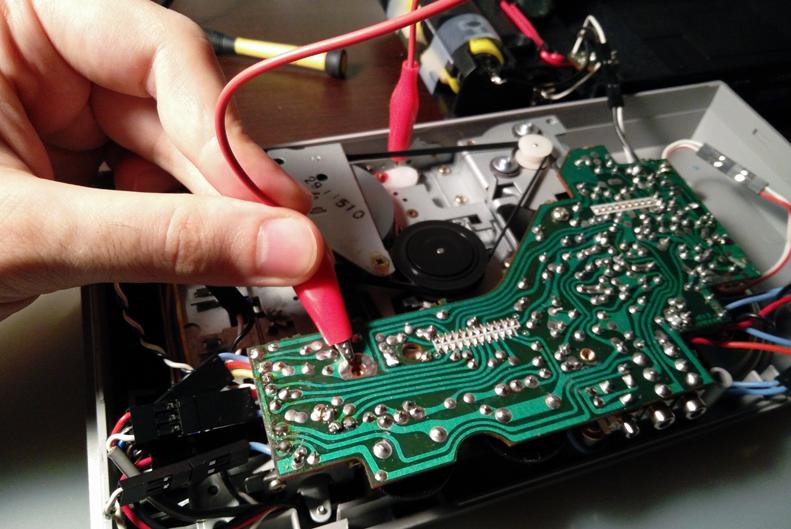 This issue occurs whether the cassette player is powered by batteries or the DC barrel jack. The player also has an option to be powered by AC with what I think is an AC/DC converter inside (not visible in the photos).

I could use a non-conductive screw or a plastic washer to "fix" the problem but then the case is no longer grounded.

I am interested in a solution that solves the problem safely but I also want to u the audio cuts out only when the screw is tightened and not just from achieving continuity with the case.

I am new to electronics. Shouldn't the case always be connected to ground for safely in the event that it somehow becomes live? 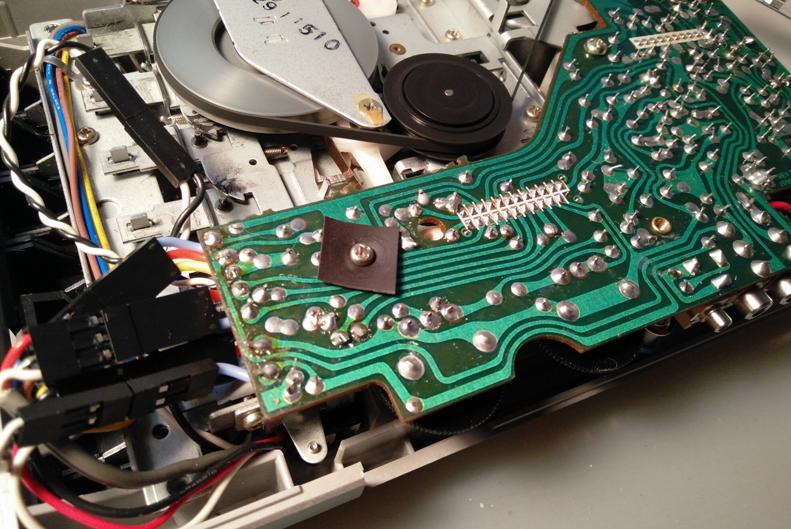 The answer provided by JRE indicated the cause of the problem. Sure enough, there was a large filter capacitor on the reverse side of the board that was just barely touching another metal standoff. The degree of which it touched probably changed as I handled the board but it would always short itself when the ground screw was fully tightened.

I bent the capacitor back and the problem went away. It was probably some kind of filter capacitor that connected up with the speaker; grounding it caused the audio to cut out.

I'm glad that I tested it only with batteries or my fused power supply connected. I guess that means that the chassis could have been live if I'd used the AC adapter?

Take out the PCB, turn it over, and look for parts that stand up higher than the others. See if those "too tall" parts can touch the metal plate.

Obviously, it isn't the electrical connection to ground that's causing the problem. Instead, the physical flexing of the PCB is either causing an open or a short somewhere nearby. In older equipment, it would not be surprising to find a hairline crack in the PCB itself or one of the nearby solder joints.

Or, it could be that the tip of the screw itself is touching something that it shouldn't — possibly a wire whose insulation has been abraded.

Sounds like an issue with the potentiometers the dials are manipulating. The sound issues you are having are common symptoms of a dirty or failing potentiometer.

Not the answer you're looking for? Browse other questions tagged audio ground ground-plane or ask your own question.

24
Are there reasons *not* to have a copper-pour ground plane on a PCB?
2
PCB plane cuts for audio paths in mixed-signal device
0
Connecting Ground Paths of Low-Current and High-Current Circuits
1
Is the bracket of a graphics card grounded?
33
Should I really divide the ground plane into analog and digital parts?
2
Connecting Two Analog Sources to One Analog Sink
1
Filling the unused space with ground plane in mixed signal pcb
0
Is it possible to make a "Sony CFS-201" cassette player/radio output sound from an external source?
2
Extending an RF ground plane outside a small PCB