I am an EE that is fresh out of college and and starting at a smaller company, and I have a question about electronic self heating, and how to keep heat from spreading in a PCB to heat sensitive components, such as thermistors that are being used to measure ambient temperature, currently there is issues in a few designs, where the temperature inside the housing increases by half a degree C with traces run directly to the thermistor without thermal reliefs or and care to trace size. The devices I have seen having trouble are usually attempting to read ambient temperature at .25% accuracy between the ranges of -20 to 85c (currently done on some designs by having two separate boards in the enclosure with small wires run between the two)

The "hot" components are mainly the switching supply, and the MCU, in most cases for some designs I am looking at, they run at 10-20 mW, and the PCB size would generally be around 2in x 4in.

Would it be better to run large ground planes underneath these components to try and dissipate the heat on that side of the board? Or would the heat just transfer to the pcb's dielectric and heat up the thermistor that way?

The common value of thermistor I am looking at is a 10k-2 NTC.

Here is an approach to thermal isolation while maintaining some mechanical strength -(the chip is an ovenized buried zener voltage reference- it would have a urethane foam insulator over it in actual operation): As well as the wide routed slots, notice the thinner ones to the left and right and the slots to the top and bottom. 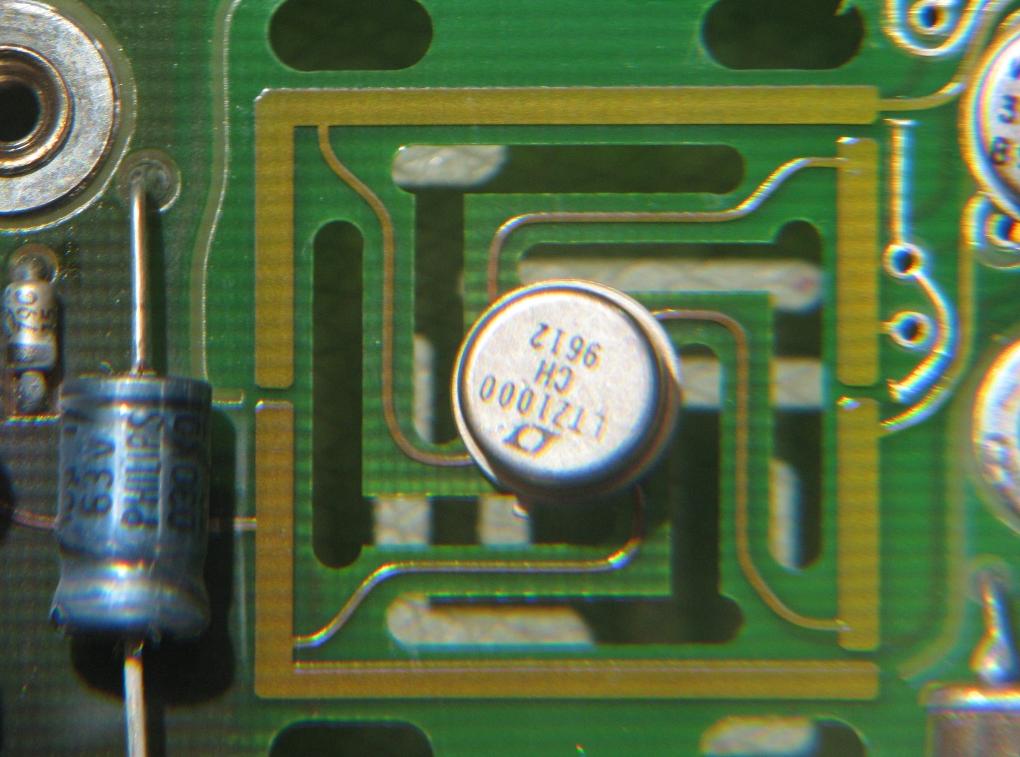 The copper, even 34\$\mu\$m copper, will conduct a lot of the heat, so narrower and longer traces are called for, as well as limiting the amount of laminate (thermal conductivity is proportional to cross sectional area divided by length).

The thermal conductivity of PCB laminate is anisotropic and is much higher parallel to the surface than through the PCB due to the direction of the weave in the fiberglass cloth. For that reason, rotating the pattern 45° might make a noticeable difference.

But, personally, I would V-groove or mouse-bite the PCB with a thin soldered or socketed jumper over it and then snap it off and assemble it with insulation between the two if accuracy is that important.

Or you could consider just faking it and compensate for the error due to the other circuitry either with a second sensor or a thermal model. That would make an interesting project to burn some time if you're not busy.

P.S. Sometimes you can make use of power dissipation by mounting the hot parts towards the top of a ventilated enclosure so that air at room temperature is drawn in at the bottom, over the sensor. I suspect your power levels are way too low for that to be a useful effect in this case, though.

From what I've seen in a room thermostat (0.1°C resolution), the traces were as thin as possible. The PCB had numerous air gaps to isolate the sensor from the heat generated by voltage regulator.

The sensor was placed at the corner of the board and there were holes milled into it to limit heat passing through the board. No copper pour in that area. So little material was left that it could break off easily if stressed. There were matching venting holes in the device's case near the sensor to get air sample from the room directly onto the sensor. 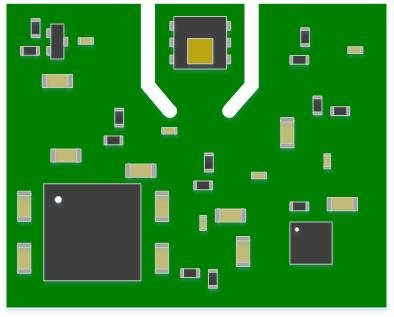 According to the datasheet, the unit still had a factory/user programmable offset (+-3.5°C) to cancel any offset error caused by the device heating up.

It might be also a good idea to only power the sensor up when sampled, to prevent it from heating itself directly.

Not the answer you're looking for? Browse other questions tagged pcb-design temperature low-power heat thermistor or ask your own question.

1
Could I use a surface mount thermistor to measure ambient temperature?
2
Can conformal coating help against high-temperature environments if the chips heat up as well?
1
"Simple" thermal analysis of component on PCB over time
1
NTC Thermistor Failure Over Time
0
How to calculate the Temperature rise of PCB and its surrounding air from the power PCB consumes?
1
Calculating PCB temperature increase
1
Tradeoffs for NTC Thermistors regarding 10K vs 100K vs 1Meg etc
6
Are inrush thermistors thermally insulated?