All opamps are ideal. The question is to find the input impedance Zin(s).

Please help me with the proper method to find the impedance. 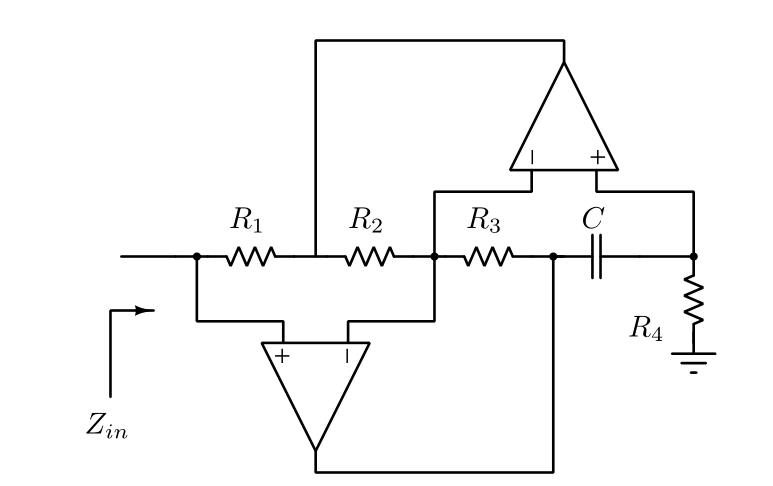 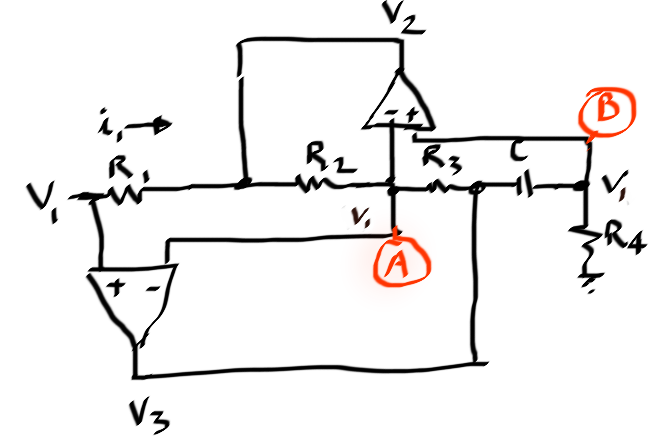 The impedance looking into the circuit is V1 divided by the current that flows into R1 (because no current flows into the opamp input).

If V2 was ground, or a virtual ground, or an AC-ground (as it is in this case), then you’d think impedance would just be R1. But in this case V2 is a function of V1 so it’s not so simple. For example, if the math worked out such that V2 = V1 then no current would flow through R1 at all. If V2 = 0.999V1 then very little current would flow, making R1 appear much bigger than it is.

The first thing to realize is that, assuming the circuit is stable, the voltages at all opamp inputs will be that same, V1.

You can get two node equations, at node A and B.

Solve each for V3 (which you don’t care about) and combine. Now you have one equation with V1 and V2. 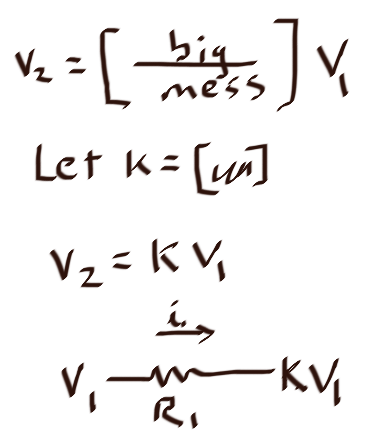 If you post your answer I’ll let you know if it matches mine!

These generalized impedance converters (GIC) are always intimidating because of the weird op-amp arrangement. I have used the fast analytical circuits techniques or FACTs to solve this circuit: determine the time constants in two different conditions (zeroed excitation and nulled response). With one single capacitor, this is a 1st-order circuit. To determine the input impedance, I will install a test generator \$I_T\$ across the input node which will generate a test voltage \$V_T\$. The ratio of \$\frac{V_T}{I_T}\$ is the input impedance we want.

The key in solving these circuits is to rearrange the elements in a friendly form where writing equations is more obvious than with the original schematic diagram. The dc resistance is obtained for \$s=0\$ in which the capacitor is open-circuited: 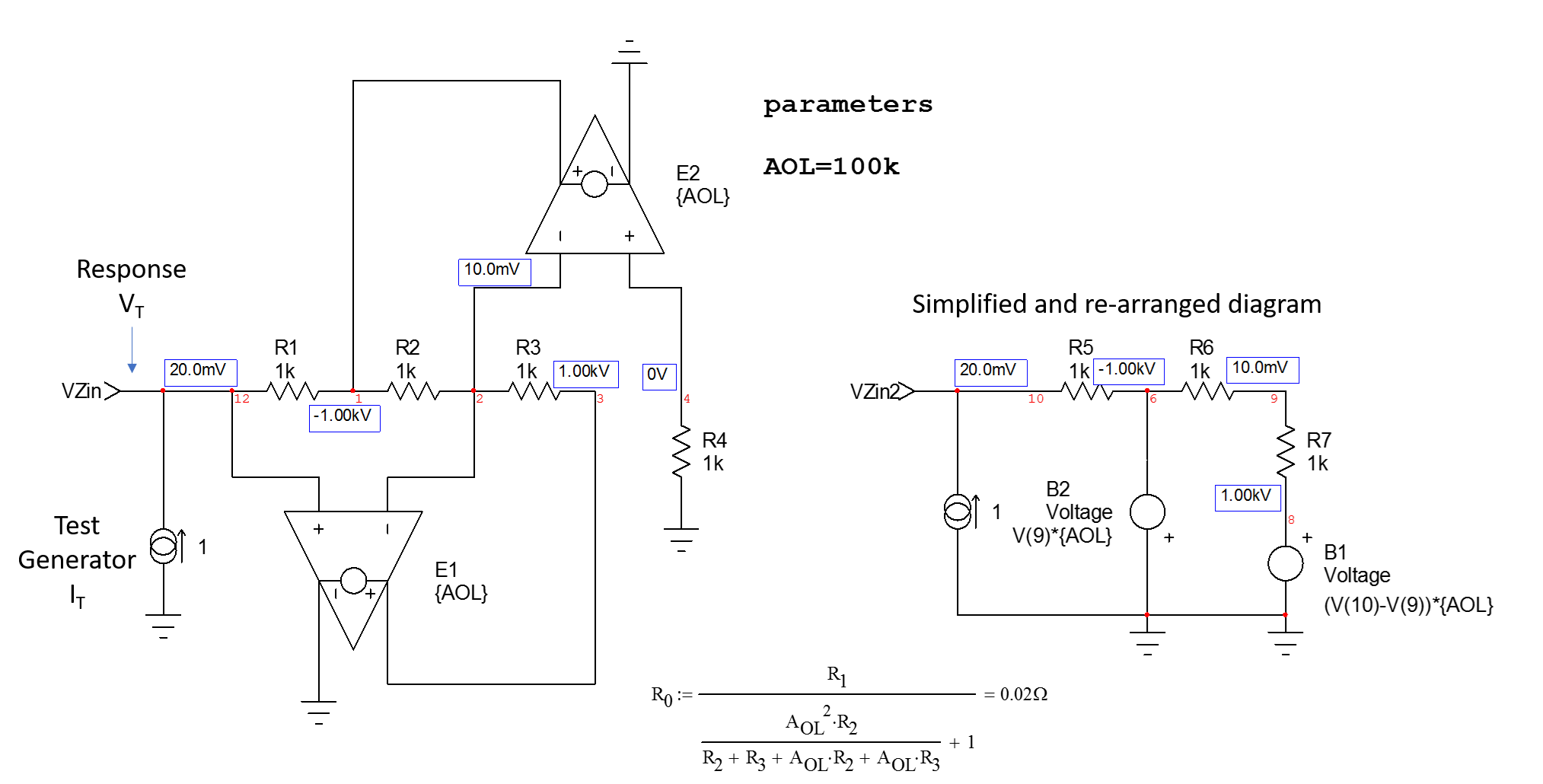 I prefer to keep the open-loop gain of the op-amp which is pushed to infinity later on. SPICE determines the bias points and both are equal (original circuit and simplified version). The dc resistance is determined after a few equations: 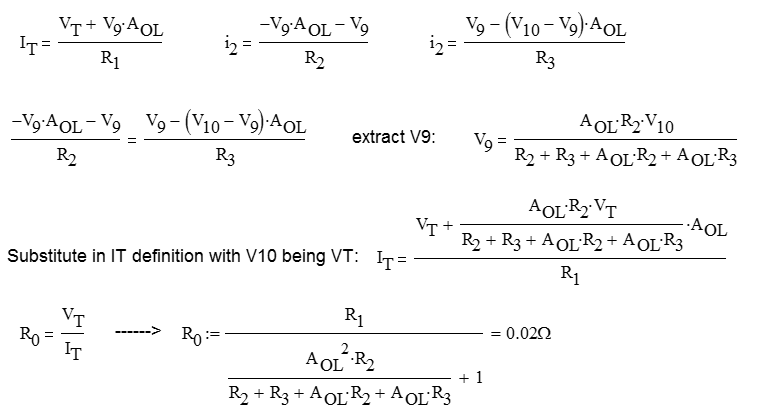 It obviously goes to zero as \$A_{OL}\$ approaches infinity. Mathcad find 0.02 ohm, in line with the SPICE operating point.

Now, we turn the excitation off - \$I_T = 0\$ - and open circuit the stimulus. The exercise now consist in finding the resistance \$R\$ offered by the capacitor connecting terminals. The new circuit is here:

A test current source is installed across the capacitor connecting terminals and the resistance is a few equations away: 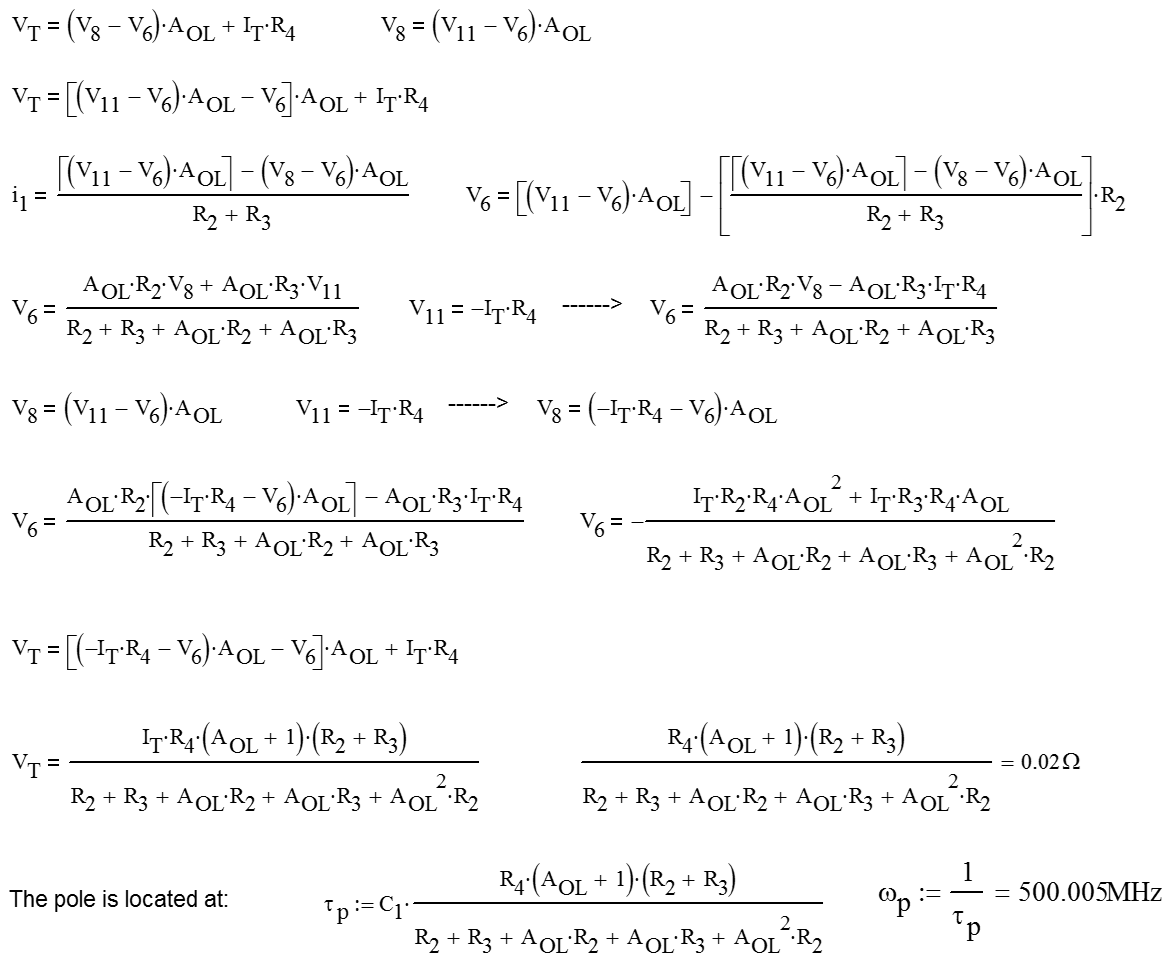 As you can see, provided the open-loop gain is high enough, the pole is located at a very high frequency and can thus be neglected.

For the zero, we find the resistance \$R\$ when the response \$V_T\$ is nulled. A nulled current source is a degenerate case and can be replaced by a short circuit. The new circuit is shown below:

The zero is obtained after a few equations: 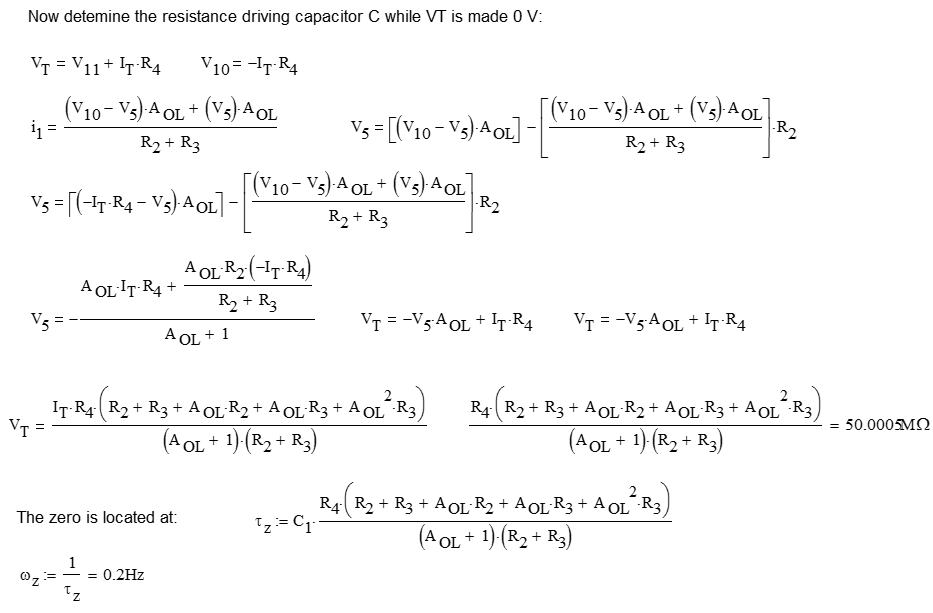 We now have all the pieces to assemble the transfer function:

A quick SPICE simulation confirms the analysis is correct:

The input impedance is swept by installing a 1-A ac stimulus across the input node. The collected voltage is therefore the image of the impedance you want.

Not the answer you're looking for? Browse other questions tagged operational-amplifier input-impedance or ask your own question.