How does a fuse blow at its current rating, regardless of voltage?

I know from reading elsewhere that it's safe to use a fuse with a higher voltage rating when replacing one, so long as the current rating and reaction speed is the same.

The current rating of a fuse represents the minimum sustained current the fuse will blow at ... eventually. A 1A fuse will take 1A for a very long time without blowing, and if the fuse can dump some heat into the PCB or has airflow across it, may never blow at 1A.

The critical parameter is the \$I^2 \cdot t\$ rating, which gives you an idea of the energy (power and time) needed to blow it. (Remember that fuses are really meant to protect circuits when there are catastrophic failures.)

It's crucially important to match \$I^2 \cdot t\$ ratings, since if you replace a fast acting fuse with a slow-blow type, even thought they both say 1A, it's going to take radically different energy levels to actually blow them.

When the fuse is intact, you only have an \$I \cdot R\$ voltage drop across it. This drop is going to be nowhere close to the voltage rating of the fuse (else it acts like a big resistor and limits the energy available to your circuit.) Once the fuse blows, the voltage rating comes into play, which represents how much voltage potential the open fuse can withstand without flashing over and re-energizing the compromised load circuit.

There are already some excellent answers to this question, but I'd approach the answer slightly differently. Consider the circuit below. 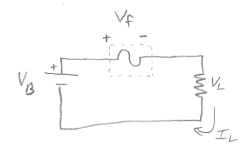 Under normal operation (i.e. fuse not blown), Vf is IL*R, where R is the inherent fuse resistance. The current, IL, flows through both fuse and load. The voltage across the load, VL = VB - Vf, where VB >> Vf. The majority of the voltage is dropped by the load, and only a small amount is dropped by the fuse.

As pointed out by others, the power dissipated in the fuse is IL2R. At some level of dissipation, the fuse will open. As the fuse opens, an arc forms that burns away more of the fuse material. During this process, Vf will start out being IL*R (as defined above), but will become VB as IL drops to zero and fuse opens fully. At the end of the clearing event, all of VB appears across Vf and current flow stops completely.

The voltage rating (and AC/DC specification) of the fuse comes into play only after the fuse opens. A fuse with inadequate voltage rating may be unable to quench the resulting arc, leading to rapid failure of the fuse. Similarly, a fuse or breaker rated for use with AC will likely depend on a zero crossing to quench the arc, where DC-rated fuses (especially high voltage DC fuses) are often tightly packed with sand or other arc-quenching material in order to prevent the power dissipated in the arc (theoretically up to VB * IL) from catastrophically destroying the fuse and to ensure that current does not continue to flow via a continuous arc (i.e. the fuse blows yet current continues to flow via plasma between fuse internals).

If the fuse never blows, the voltage rating of the fuse doesn't matter. At the moment it does blow, the current rating ceases to matter and you'll quickly know if you spec'd the appropriate voltage fuse for your application.

The fuse "sees" largely only it's own environment. The fuse wire melts when the net thermal input is enough to cause enough temperature rise to melt the wire or other fusible element.

When a fuse blows, it interrupts a (in some cases quite large) current. The fuse does not go instantly from "normal" to "completely blown" - the wire heats up and melts, creating a short break which expands because the wire does not cool down immediately. When the break is small, you can get an arc (especially if the load is inductive), which is extinguished soon after because 1) the instantaneous current reaches zero (since this is AC) and by the time the voltage comes back to peak, the gap is wide enough for an arc.

Imagine using the small 250V fuse with, say, 10kV - it would arc over the entire fuse.

As for the power at which the fuse blows - it is tiny compared to the power of the system, but it does imply a limit on how low the voltage of the system can be. If the fuse has 0.237ohm resistance and 1A current, then it drops 0.237V, so if your system runs on similar voltage you will have problems.

user33372user33372
1
\$\endgroup\$
Add a comment  |
Highly active question. Earn 10 reputation (not counting the association bonus) in order to answer this question. The reputation requirement helps protect this question from spam and non-answer activity.

33
What causes a fuse to blow, the current or the power?
3
Should a fuse with the correct amps, but is physically too small, still power my stereo unit?
1
How much 12V DC current can I safely draw from an AC 230V 13A socket and why?
-7
Why Do Y Electrial DC Fuses Burn Out?

10
Why does fuse blow up sometimes?
4
How can a Live-Neutral transformer fault cause 2000 Ampere to flow?
2
How to blow a 0.6 ampere fuse
2
Fuse rating and safety
1
Is there a standard stating how fast a fast fuse is, how slow a slow fuse is?
2
Does an AC rated fuse blow at the same current DC
1
Help identifying fuse 3.6 x 10mm 125 V, 2.5A cylindrical maybe ceramic?
1
Fuses & current ratings - are there fuses that blow "fast" close to their nominal rating?
0
Blade Fuse Properties?