I'm designing a general purpose robotics controller. The controller is split into two boards, a power board, and a computation / data handling board. The controller is intended to be flexible, so it is to take two battery inputs. Either battery could be between a 2S and a 6S lipo. The controller provides several toggle-able outputs, 1x 60 amp, 4x 30 amp, and 4x 5 amp with the user able to select which battery will provide current to the output.

There are three possible configurations I'd like to implement for battery power to each output: Battery 1 only, Battery 2 only, or Battery 1 & 2 in parallel (some sort of current matching would be needed here). I'd like to do this because the controller is intended to be flexible, so it could have one backup 2S battery for 5V systems, and a main 4S or 6S battery, or dual 4S batteries, or a 4S battery and a 6S battery etc.

I've developed an idea for how I want to do this, shown in the simplified diagram below. 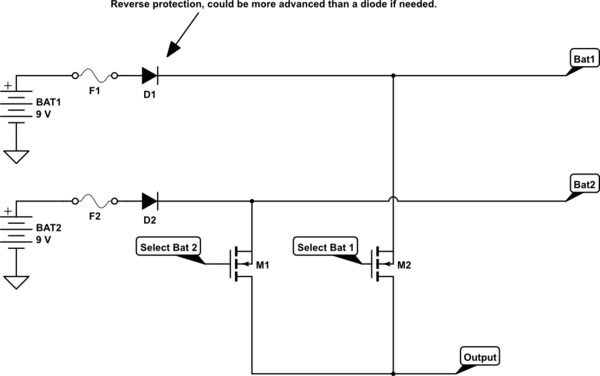 Power distribution is set up using a battery bus with high current MOSFETs selecting which battery powers a given output. This scheme is repeated for each output using either a dual N-Channel mosfet array, or a half H bridge to keep the FETs at similar temperatures for parallel mode.

Is there anything inherently wrong with this idea? Are there specific safety circuits I should implement for either the batteries, the outputs, or the MOSFETs?

edit: The batteries in the schematic should not say 9V

0
Power Source Switching (my first circuit) — will I blow anything up?