Instrumentation amplifier didn't fix my ADC crosstalk, and I don't understand why

A previous iteration of my circuit was as follows:

After prototyping this, I found the ADC readings to be very noisy, which I eventually realized was due to the ADC inputs having a high-impedance (GΩ range, due to the current source), leading to slow charging of the internal track+hold capacitor in the ADC as well as crosstalk between ADC channels, and resulting in signal degradation. I confirmed this by first ensuring that the ADC inputs were stable (they were, with ≤5mV peak-to-peak variation, which is mostly attributable to power supply noise in the prototyping setup) and then bypassing each ADC input to ground a with 0.1µF ceramic capacitor. The output signals immediately stabilized with bypassing.

The time constant of the resulting RC network on the ADC input was in the ballpark of 10s, which may be okay for my application. However, the MAX11617 data sheet recommends buffering the inputs in this case, so I decided to explore that.

In the current iteration of the circuit:

However — and this is where I am baffled — this also resulted in noisy ADC readings. I again confirmed that ADC inputs (aka amplifier outputs) are stable (≤5mV P2P variation) and then again tried bypassing the ADC inputs to ground with 0.1µF MLCCs. The outputs stabilized with bypassing.

This suggests I am seeing slow T+H charging times again, but now I am confused as to why that is happening; my understanding was that the whole point of using an instrumentation amplifier was that it has a low impedance output, and so I was expecting the ADC outputs to be stable when multiplexing across 6 low-impedance inputs.

PS: Tried making a minimal working example with only 2 RTDs and can't repro the problem. I will rebuild the original example one step at a time until the problem reappears, and I'll be back when I have more info from that. 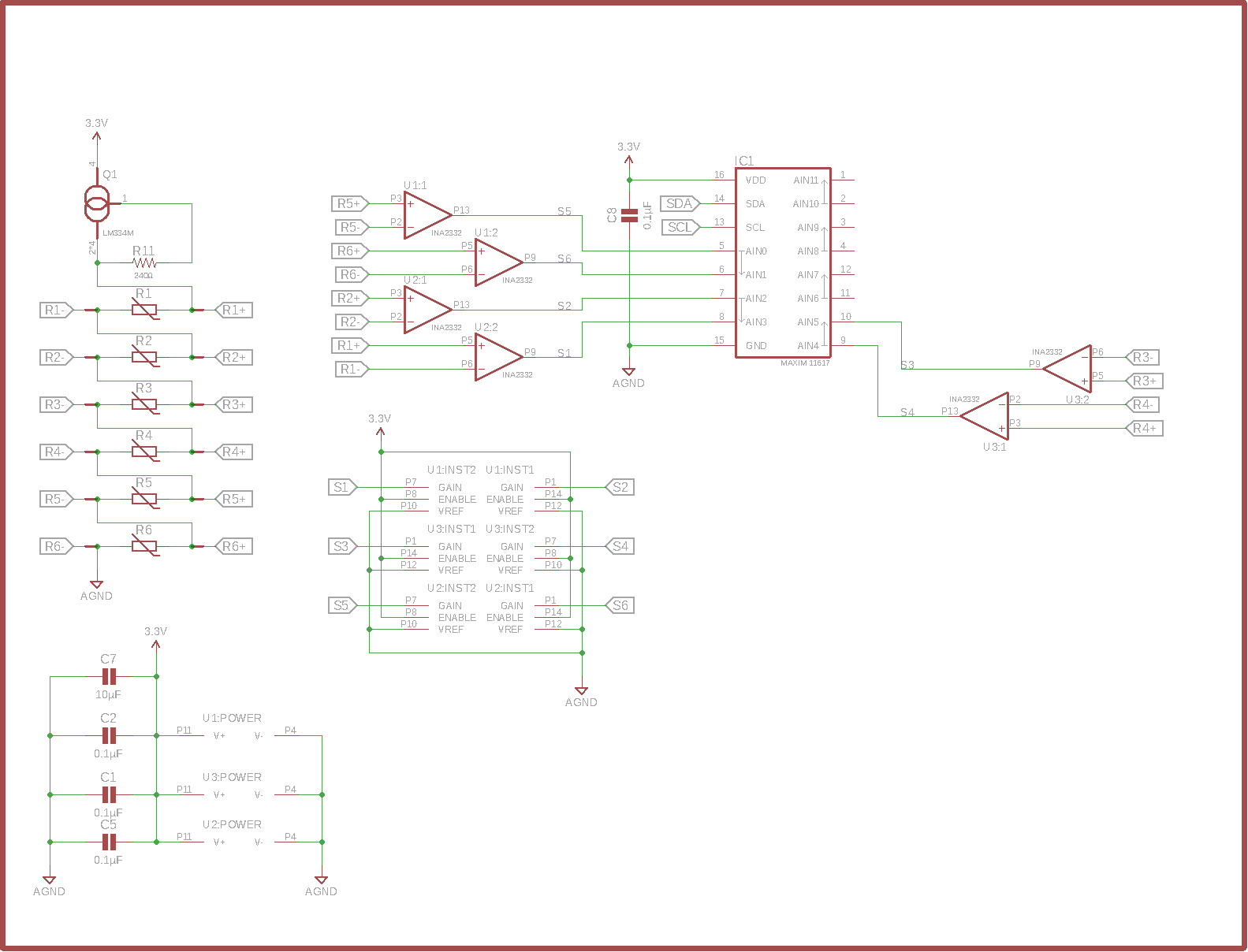 The problem was that the 1kΩ RTD-in-series setup was driving the common-mode input on several of the inamps out of their common mode input range, which resulted in noise on their outputs. That noise was then passed on to the ADC, where crosstalk coupled it into all ADC outputs.

This is also why the problem disappeared when I tried to repro with only 2 RTDs; inputs closer to 0V were within CM input range. I gradually built up from there and as soon as I stacked up enough RTDs, noise was coupled into all ADC outputs. Some additional isolation / part swapping ensued and I narrowed down the problem. I fixed it by breaking up the series arrangement of RTDs into two branches, thereby keeping CM inputs in the lower half of what they were before. With that setup, my noise on ADC outputs is 1-2mV P2P.

Given the low impedance of the RTD, and the SLOW changes of temperature, the thought of Crosstalk as a major accuracy seems novel and reaching.

Given in your question, the addition of capacitors to ground has usually reduced the noise (the ADC output code spread), I'd think about reducing Gound Noise between the Sensors and the ADC Ground pins. Does a SWitchReg provide the power. How does the MCU get its power? What MCU outputs use the "ground" as return paths?

Can you show a photo of the prototype, and indicate where the numerous VDD bypass capacitors are GROUNDED. To a heavy, wide, ground.

We can't see your layout, so it's impossible to comment on how much, if any, it may be contributing.

I would suggest at least the following filter on each RTD input: 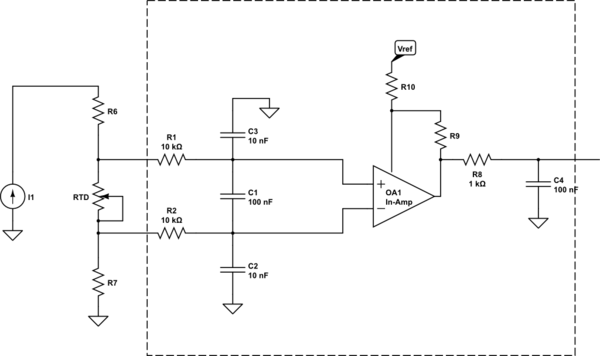 All capacitors are NP0 ceramic types.

Not the answer you're looking for? Browse other questions tagged adc instrumentation-amplifier or ask your own question.