Connect multiple earphones (with microphone) to one computer

I would like to connect up to 4 pair of earbuds (the in-ear type, stereo, with a TRRS connector and a tiny condenser microphone located along the cable, think iPhone wired earbuds) to a single computer, an Apple iMac.

The signal from the 4 microphones should be merged (added) into the single Mic input on the computer, and likewise the stereo output should be used to drive all 4 pairs of earphones. I would like to additionaly have 4 potentiometers to act as independent volume controls for the 4 earphones.

The 4 earphones will be the same exact model. This is the simplest diagram I could come up with (it only shows 2 modules for brevity, but the final design would have 4): 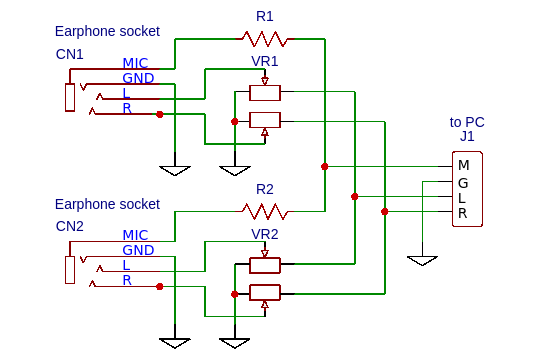 Would this be suitable? Would it damage the PC input in any way? What values would you recommend for Rn and VRn?

Do you think I need an active stage (op-amp) in either the mike and/or stereo output signal paths? I fear I will need an active amplifier at least in the output, otherwise the volume might be too low. In that case, could you recommend a suitable IC and schematic for the amplifier circuit?

Additionally, this setup will be used with each socket either having an earbud plugged in or not at any given time. So if I add op-amps, do I need to power them on based on the plugged in status of each jack? Again, if you could point to existing schematics, that would be very helpful.

100 ohms is probably a good starting point for the volume controls. R1,R2 is harder to pick. 1K perhaps.

Not the answer you're looking for? Browse other questions tagged audio microphone headphones or ask your own question.

0
Testing a 0.3W, 8ohm speaker?
1
Put a resistor in series between amp and speaker
4
How do I appropriately power a headphone amplifier and where do I place the volume regulating potentiometers?
4
Device to loopback mic to headphones
1
Electret microphone - connect to Codec
0
Cannot connect microphone using audio jack
1
The right way to have amplified speakers that mute when you plug in earphones