Since my understanding is that one instruction on the PIC24 takes one Fcy clock cycle, I am trying to configure the clock so Fcy is as close to 70 MHz as possible. However it seems I can only run it at about half the rated speed -- around 31.5 MHz. Anything higher than that, and the PLL stops doing its thing.

I am using the internal FRC clock, since I don't need exact timing anywhere (not using UARTs for example). The nominal FRC frequency is 7.37 MHz, which can be adjusted from 6.52 MHz to 8.20 MHz using the OSCTUN register.

As a reference, I am using the PIC24EPXXXGP/MC20X datasheet. Here is the relevant section on setting up the clock: 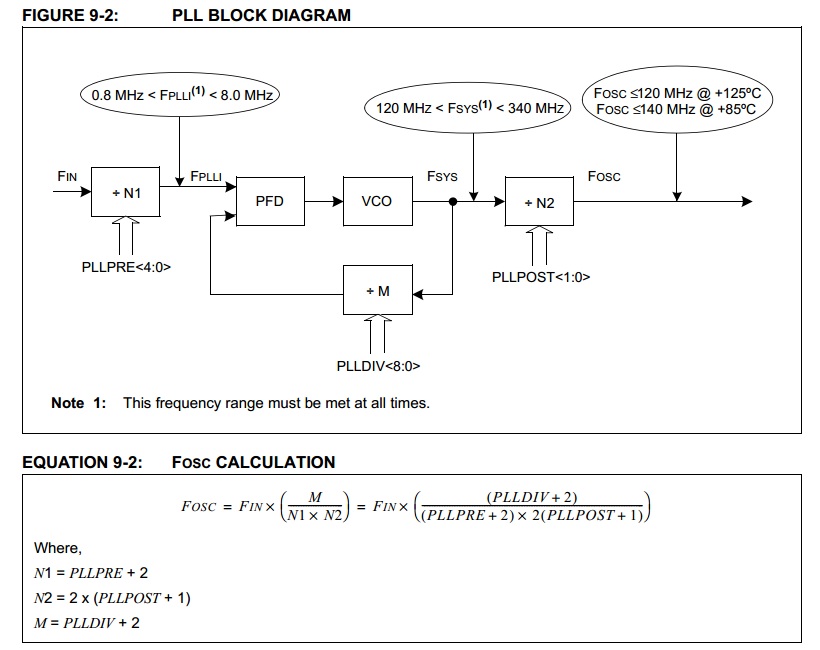 and here is my setup code:

With the values show above the clock works and I get a nice output of around 31.5 MHz as measured using the CLKO pin (which is the same as Fcy, the instruction cycle clock). The 31.5 MHz compares well with my calculated value of 31.3 MHz above, given that the 7.37 MHz FRC clock may be off somewhat. 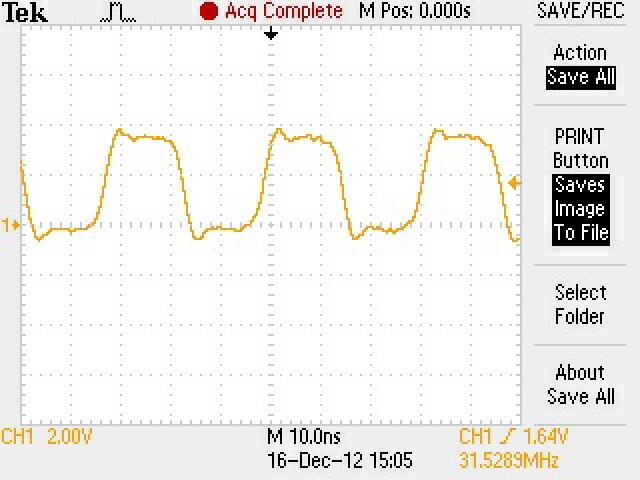 I would like to use an M value of 76, which would give me an instruction cycle time of 70 MHz.

But if I make the value of M any higher than 34, the PLL becomes unstable and the clock output reverts to around 3.70 MHz, which is half of the FRC frequency (implying the PLL circuit is out of the picture). When it is running, I can sometimes see some flashes of the higher frequency on the scope, as if the PLL is trying to start up and can't stabilize. As one can see from my code sample, I am waiting for the PLL lock before continuing.

UPDATE: This seems somehow related to the final frequency, not the PLL Fsys frequency. I tried the following combination and it also worked:

I was a little concerned maybe you couldn't run at 70 MIPS using the internal FRC, but the datasheet for the PIC24E oscillator says "the FRC postscaler output can be used with the internal PLL to boost the system frequency (FOSC) up to 140 MHz for 70 MIPS instruction cycle execution." so I'm not trying to do the impossible.

Another UPDATE: I tried a second board and got the same results -- I can't seem to set Fcy to a frequency higher than 40 MHz without the PLL dropping out. I also tried hooking up a buffered 24 MHz clock into OSC1 and configuring the system to use that as a extral clock (EC) with PLL. Exactly same results.

How can I get a faster clock to work?

FINAL UPDATE: Turns out that the person doing the board layout put a 0.1 uF cap on VCAP without looking at the datasheet and I never caught it either. I swapped that out with a 10 uF 16v low ESR (datasheet called for 4.7 uF or higher) and now I can run at 70 MIPS. See accepted answer re how I found this was the problem.

You should check out example 7-2 in the pic24E family reference manual (FRM) titled "Code Example for Using PLL with 7.37 MHz Internal FRC":

It looks like the critical step you're missing is __builtin_write_OSCCONL(OSCCON | 0x01);

If this still doesn't work then perhaps there's just an issue with your power supply. The internal FRC oscillator is unstable under temperature and voltage stress, so perhaps you should check to see if you have too much noise. This would make the FRC wonky as well as the VCO used in the PLL, preventing a lock.

If you look at table 30-18 in the pic24EP128MC206 datasheet, it tells you that over the temperature and voltage range you have about a ±1% for some models and ±2% for others. Figure 31-9 shows the variation with a stable voltage over a temperature range. There doesn't appear to be an analysis of voltage variation at a stable temperature.

If you're trying to get a stable run at a high frequency I would just grab a crystal.

EDIT (from comment): So from the sounds of your other posts about your conditions it sounds like you should look elsewhere for a problem. What's the frequency of the ripple? Did you size the internal Vreg capacitor properly? It sounds like since this is a locking issue and not a setting issue you're having some other problems with the board that aren't related to your code.

Glad this turned out to be the right answer! Good luck debugging the rest of the board!

Have a look at the PIC24E reference manual, Section 07. Oscillator. It has a more in-depth explanation of the oscillator section and the PLL. Especially, on page 7-26, it has an example of exactly what you want: use the FRC and the PLL (even though it is for 60MHz). THis example sets the configuration bits differently that your example code - esp. it doesn't automatically switch to the user-defined clock source.

I also see that you enable the clock monitor - it might be that it triggers for some reason and then switches back to the normal FRC.

Regarding the PLLDIV: I think this is a misconception. The data sheets always talk about the values used (e.g. PLLDIV), which are part of larger registeres (PLLFBD in this case). The same is for PLLPOST and PLLPRE in the image you posted - they are part of the CLKDIV register.

I'm not familiar with PICs, and obviously you seem to know what you're doing. But are you sure the PLLDIV doesn't exist? Are you sure you have the correct chip or datasheet?

Updated the All Resets values for CLKDIV and PLLFBD in the System Control Register Map (see Table 4-35).

So maybe you have an older chip (if this effects anything, I only skimmed the datasheet.)

There is a minor inconsistency in the documentation; Figure 9-2 and Equation 9-2 refer to a PLLDIV register, which doesn't exist on this microcontroller

If you're sure you have the correct chip and datasheet, that seems like a major discrepancy, enough to almost make me think you may have a counterfeit or defective chip (as long as you do know what you're doing.)

And it looks like you are following this, from the datasheet:

If the PLL of the target device is enabled and configured for the device start-up oscillator, the maximum oscillator source frequency must be limited to 3 MHz < FIN < 5.5 MHz to comply with device PLL start-up conditions. This means that if the external oscillator frequency is outside this range, the application must start-up in the FRC mode first. The default PLL settings after a POR with an oscillator frequency outside this range will violate the device operating speed. Once the device powers up, the application firmware can initialize the PLL SFRs, CLKDIV and PLLDBF to a suitable value, and then perform a clock switch to the Oscillator + PLL clock source. Note that clock switching must be enabled in the device Configuration Word.

I've had success with dsPICs at 50MIPS using the internal RC oscillator and PLL. Give this a try:

I had the same problem with the PLL which didn't not lock on the high frequency from my external oscillator. My problem was the ESR of capacitor on the VCAP input. It must be less to 1 ohm (see PIC24E datasheet), and in my case the ESR was 4 ohm, and it was not running.

So thanks for the tip!

Not the answer you're looking for? Browse other questions tagged pic clock-speed or ask your own question.