Why does radio reception consume so much energy?

On low-power radios, the current consumption for reception is similar to the consumption for transmission. For example, the Texas Instruments CC2652 System-on-Chip datasheet claims these values:

I've read an explanation that the most energy hungry component is the local oscillator, which generates the high-frequency carrier wave and needs to do that both for reception and transmission. However, it's not clear to me why would the generated sine wave need to be with similarly high amplitude in the case of reception, compared with the case of transmission. An alternative hypothesis is that running all of the (other) analog and digital RF components is what consumes the energy. Can you clear up the confusion?

In short: receiving is much more complicated than transmission.

You'll notice that whatever you measure in the real world is overlaid with noise.

The problem "seeing all this noise with a bit of signal in it, how do I know what the transmitter meant to transmit" is the central problem that communications engineering tries to solve.

So, to receive a couple of bits correctly, your receiver needs to:

Well, first off, you're looking at a microcontroller. The datasheet also says it will draw 3.4mA without any radios on, so you can only attribute 3.5mA to radio reception.

And then, if you look at the block diagram, you find this: 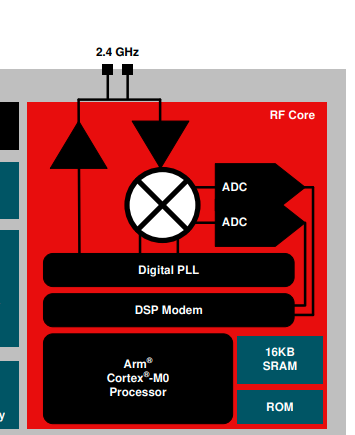 That's right, a software-defined radio with its own ARM core. This allows, as TI says, an awful lot of future-proofing; they can add support for new protocols on the 2.4GHz band just by releasing some new firmware for that core. But can you really blame a CPU that does sample-by-sample digital processing of radio signals if it uses a few milliwatts of power? I'd say it's pretty efficient for what it is.

However, it's not clear to me why would the generated sine wave need to be with similarly high amplitude in the case of reception, compared with the case of transmission.

The thing is, it's not a high amplitude. 0 dBm of transmit power is 1 milliwatt and a power of 1 milliwatt into 50 ohms is 224 mV RMS i.e. a small voltage but, a voltage that is also about right for an IF stage and a mixer in a receiver.

Just look at the current consumption of the transmitter - 7.3 mA. If its power supply is 5 volts then that's a power consumption of 37 mW to emit 1 milliwatt on the antenna. Not efficient.

I might be more interesting to ask why the transmitter consumes 37 mW in order to deliver 1 mW to its antenna.

Both transmitter and receiver need oscillator hence, low power systems will consume about the same current consumption if using the same sort of power supply voltage.

Signal reliability may be improved either by putting more power into the transmission, or putting more effort into extracting a signal from the "noise" (unwanted nearby signals). The reason the receivers for these little radios need more power than the transmitters is that the transmitter power is restricted by emissions regulations. One could design lower-power receivers rather easily if they only had to receive signals that were much stronger than any other nearby signals.

By comparison, a crystal radio set consumes almost no power, but will have very poor adjacent signal rejection. I have actually used a crystal set to receive broadcasts, but I was in a city with one local AM radio station. I would not expect to get good results trying to use a crystal set in the Chicagoland area, which has multiple 50,000 watt AM stations at 670, 720, 780, 890, among others (unfortunately, a wire broke on my cats-whisker set and I would have to disassemble it rather thorougly to repair it).

0
433 MHz receiver consumes too much power

2
What Modulation does weather radio use?
2
Radio waves reception through USB device
3
How to conduct "Transient Power" measurement according to ETSI EN 300 220-1 (v2.4.1)?
0
radio energy harvesting on WIFI questions
12
Why are radio signals clearer near the human body?
2
Antenna for broadcast AM reception on ARM Radio SDR
2
How does AM radio transmit volume?
0
How does the dish size increase reception range of radio signals?
0
Why does antenna tuner in crystal radio use capacitor and an inductor?