Why feedback resistor be at least 10 times of the input resistance?

Figure below is an integrator with reduced output offset due to the 10R shunted at the capacitor. It was written on the book that:

One way to reduce the effect of input offset voltage is to decrease the voltage gain at zero frequency(DC) by inserting a resistor in parallel with the capacitor, as shown in figure below. This resistor should be at least 10 times larger than the input resistor 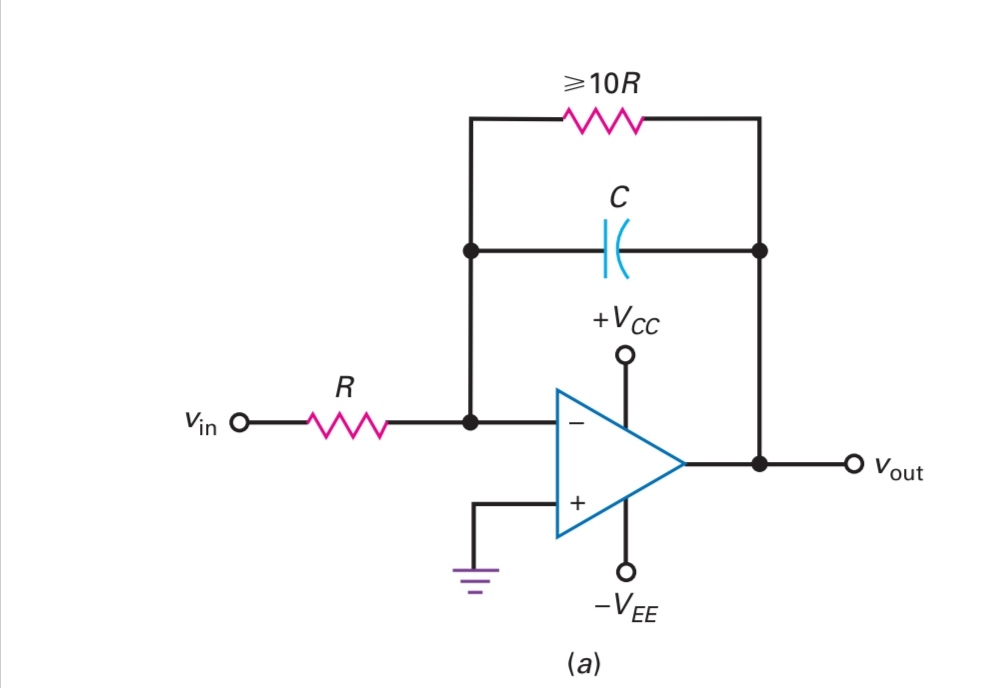 Why should the resistor be at least 10 times of the input resistor?

Why not use the same resistance on the input for the feedback resistance so that the input offset voltage will only be amplified by 1 instead of 10 when using 10R?

It should be much larger than the input resistor. The number 10 is just a nice round number somebody picked.

The feedback resistor is a necessary evil. Ideally you wouldn't want to have it, but without it the output is likely to saturate. If the op-amp saturates then the op-amp will no longer behave like an op-amp and you won't get anything close to the integral at the output.

The feedback resistor takes some current that would otherwise be going into the capacitor to create the integral function. Having it there creates a little bit of error in the output. The larger the feedback resistor is, the less error there will be.

Normally if you are trying to get a pure integral function, then you make a trade-off between having the feedback resistor as large as possible, but not so large that the output saturates.

So how does it prevent the output from saturating?

Imagine you put a sine-wave into the input that is centered around 0V. Theoretically the average value of this waveform is 0V, so the integral should be bounded. But in reality the average won't be exactly 0V, and even if it was, the op-amp input has finite input resistance and will take some bias current.

Note that if your capacitor is leaky enough, you may not need to add a separate resistor, since you essentially have one inside the capacitor.

An IDEAL integrator does not exist: It would require an ideal operational amplifier with infinite gain and zero offset.

Therefore, we need a trade-off between integrating properties and DC operational point considerations. As a consequence, each real opamp-based integrator is a lowpass (R parallel to C) with a rather small integrating area: Far above the 3dB-lowpass frequency (that is the reason for a large parallel R), but still below the transit frequency of the opamp.

In this context - note that the circuit will have a 90deg phase shift (ideal integration) at ONE SINGLE FREQUENCY only.

Remark: If the integrator is used within an overall stabilizing feedback loop (filters, opscillators, control systems) there is no need for a damping resistor in parallel to the feedback capacitor.

Not the answer you're looking for? Browse other questions tagged integrator or ask your own question.

3
Integrator with diode
1
Input Bias Compensation for a Comparator
0
Miller integrator dc offset ->why no gradual increase towards saturation?
2
How does the compensating resistor act in op amp
0
Ideal integrator op-amp DC offset at output?
1
I need help sing a 555, op-amp integrator, and comparator to generate a voltage controlled PWM signal
8
How does an op amp integrator work?
2
Is there a simple way to discharge a bipolar capacitor using a 5V signal and a MOSFET/BJT?
4
Feedback resistor value in op amp integrator