What is making this LM386 circuit so distorted? 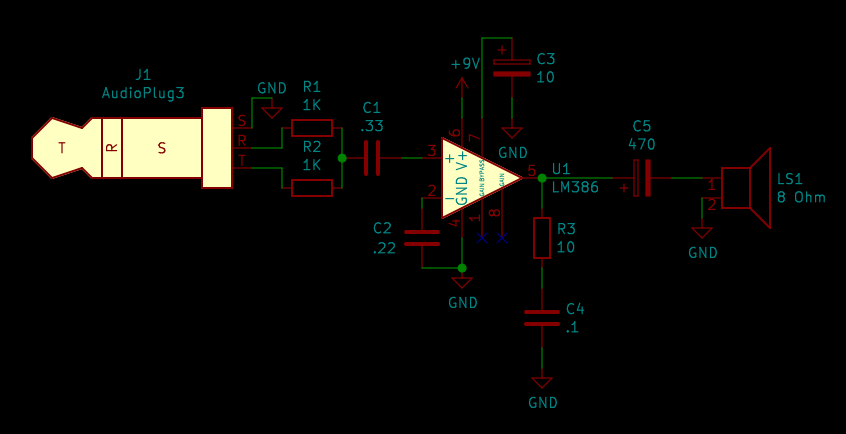 I found this circuit on a YouTube video and tried copying it down into a circuit for testing, but the audio that comes out of it is really low quality and distorted. I don't expect sterling quality out of a quick hobby circuit like this, but I do expect something better than what I'm getting. This copying comes with the caveat that I don't really know where to find the video anymore. The schematic, however, is a faithful reproduction of what I have built, complete with all alterations from spec.

I had to fudge some of the capacitor values, given what I have on hand. I added in separately the part where the two channels get mixed with 1K resistors, as I just have the one speaker here and this seems an acceptable way to mix two channels. The audio source has just been my phone, as it's the most convenient thing on hand with the jack in question. The physical circuit is built on a mini solderable bread-board without power rails on it. I know that I should have kept it on a solderless one until I had it thoroughly debugged, but I got excited and locked myself into harder changes.

C3 should be somewhere close to C5 (same or double the value) since its job is to supply the instantaneous power that will be delivered to the load via C5. You can reduce it if you have a very well regulated supply, but a 9V battery doesn't count.

You should also check that the DC voltage on U1 output is half the battery voltage (give or take). If not, the output swing before clipping will be reduced. That would suggest some DC leakage somewhere, faulty C1 or C2.

Apart from that it sounds as if it's doing what an LM386 does. You need an oscilloscope to be sure, but I expect you're just overloading the puir wee thing since it's clean at low volumes.

If you have a scope and signal generator, then check out the distortion at BASS tones versus TREBLE tones.

The bypass cap will not help on the BASS tones.

Not the answer you're looking for? Browse other questions tagged lm386 or ask your own question.

5
LM386 amp circuit lag
9
How does this LM386 circuit boost bass?
10
LM386 audio amplifier not amplifying
5
Distorted lm386 circuit output waveform
8
How to improve lm386 amplifier circuit
1
Why does my AY-3-8910 sound so distorted?
7
Is a minimum of 1000µF capacitance needed between an lm386's output and a speaker and if so why?
3
LM386 Amplifier not amplifying
1
What happened with this LM386 Amplifier Output
1
LM386 circuit design questions