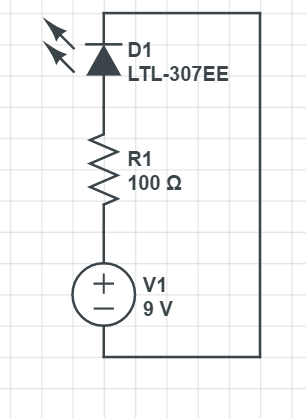 This is a very simple circuit, but for some reason the resistor keeps heating when I try to use red LED's which are rated at 0.007 Amperes, so I tried to check the current going through the resistor, which caused the problem.

The LED simply goes out, and it won't turn on again. I tested this with a white LED also, same problem.

I can test the LEDs fine, and they show 0.0087 amps, which is fine, but the second I touch the resistor it burns up.

Does anyone have an idea, why this happens?

You are not using the multi-meter correctly. To measure voltage you can just put the probes across the component you want to measure. It's like measuring water temperature. You just need to stick your finger in and feel it. No need to divert the water.

But measuring current is like measuring water flow. You need to divert all the water through your measurement device. When set to measure current, the multimeter probes will be changed they basically act as the same piece of wire since the multi-meter is expecting you to send all the current to be measured through it. If you place the probes across something in current mode, it diverts current and causes a short-circuit across the component.

You must actually break the circuit and stick your multimeter into it to measure current. When in ammeter mode, your two probes are basically the same piece of wire. If your meter is in current measurement mode and you stick the probes into your circuit across the resistor as if you were measuring voltage it will be as if you stuck a piece of wire across your resistor. This will divert all current that would otherwise flow through your resistor through the multi-meter instead. In other words, it shorts out your resistor and removes it from the circuit, then your LED explodes.

You need to break the circuit and put the meter in SERIES with the LED+resistor+battery.

It will measure the same current wherever you put it, since it's a series circuit.

You are putting it in PARALLEL (across the LED) which means the LED is shorted (almost) and the current comes from the battery + resistor so you get (ideally) 90mA = 0.09A not 0.009A with 100 ohms (maybe you used a different value of resistor like 1K).

When you put it across the resistor, the current flows through the meter and LED with little resistance so the LED is damaged (can also blow the fuse in your meter). Some meters can be damaged by this (but the Fluke is a good product and is well protected, still it can be a pain to have to replace the fuse).

A cheap meter used this way across the mains can be physically dangerous. Some meters have an alarm beeper that goes off when the probe is inserted into the current measurement jack and the switch is set to a voltage range (it is easy to forget and stick the probes across a power supply, so it's a good habit to always return the probes to the voltage jacks).

Not the answer you're looking for? Browse other questions tagged led current multimeter or ask your own question.

7
Why are red LEDs so dim & how do I make them brighter?
3
Multimeter experiment with 10A setting — what happened?
0
How much power should 14.4W LED strip consume?
0
NeoPixel led WS2812B shines the right color only every 2nd time
0
Totally noob here,help me choosing the best method of powering led
3
Reduce flickering on cheap 220v AC GU10 LED Lamps
0
Using a LED with an ESP8266 module
1
LED strip keeps blowing transistor
2
How do I safely power 2m 144 LED/m WS2812B strip with 5v and 10a?