Relay for Solar System as Backup Only

I'm working on a seismic alert network and seismograph station at my school in Puerto Rico. We're building a solar system for the system to continue running during a potential seismic event. The system only consumes about 10 Watts, but with the satellite internet equipment it might go up to about 40 Watts. Based on my calculations, the needed battery bank will be about 200AH (12V System with AGM batteries for safety). This goes a bit over our budget, so I thought of redesigning the system so it would be more of a "backup" instead of 24/7 solar power.

What I had in mind

I thought of using a relay to control the change as follows:

The relay will be activated with a 5V Power Supply connected to the school's mains electricity, so if the power goes out, it will transfer the load (satellite internet equipment) to the battery backup power.

What I want to accomplish with this

So what I'm thinking is that by maintaining the satellite internet equipment connected the majority of the time to mains electricity, I can downsize a bit the battery capacity needed for the solar system, since it will only consume the 10 Watts from the seismograph. Then in the event of a power outage, it will provide some hours of power to the internet system, even if it goes out before the sun goes up again.

Is this an automatic transfer switch I'm referring to?

Feel free to give suggestions about the system, if it could work, if it would be dangerous, or if there's a better solution to it! I appreciate your feedback!

Should this be your schematic, it would be quite okay. 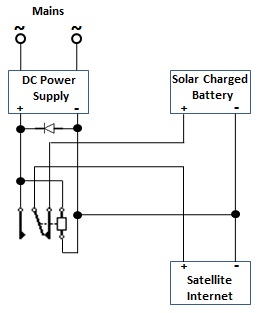 An alternative to your proposed approach is the "online UPS" strategy:

And that's it — no switching devices at all. It's the same way a car battery system works — there's one circuit that the battery, charger (engine-driven alternator), and loads all connect to (except that the ignition switch exists to turns off the loads).

As long as your mains battery charger is capable of supplying enough current to power the loads, it'll work continuously without significant charge-discharge cycling of the battery.

The advantages of this are:

Not the answer you're looking for? Browse other questions tagged power-supply batteries relay 12v solar-energy or ask your own question.

7
Battery Backup: C10 vs C20
0
Solar panel system with as minimal reliance on the grid
0
Backup Battery for 12V DC Motor
0
Running a load off a solar panel connected to 2x 12V batteries.
5
Relay not switching immediately from switching power supply to battery backup
1
Switching between a solar cell and battery?
3
How do MPPT charge controllers curtail the power if the load is less than the solar generation?
0
Powering refrigerator using solar inverter
0
Emergency Backup Battery Supply