I made my first schematic for an electronics project. Since this is the first time there'll probably be a lot of beginner mistakes and it would be really helpful if someone could check it for wiring errors.

I try to make a Controller for LED-Strips like the ws2812b that can read animations from an micro sd card. So Vin is a 5V supply for higher currents (e.g. 6A) to drive at least some of the LEDs. Since regulating high currents on the pcb seems to be too complicated for my first project I chose to only regulate the voltage for the Microcontroller. Will this be sufficient for the LEDs?

The 5V and 3.3V regulator are wired like suggested from their datasheets.

The MCU is a ATMega328P. The wiring is almost identical to an Arduino Nano without USB to Serial Chip.

For the Micro SD card there is a logic level shifter (5V from MCU to 3.3V for Micro SD Card) to convert the SPI signal.

The breakout for SPI is for programming the MCU. Those for I2C and UART are there to allow me adding further functions later (It is a first test version after all).

The last three breakouts are for a powerswitch, a button (I tried to pull it down and to debounce it) which will make it possible to switch the animation and a potentiometer to control the lightness.

I hope the description is detailed enough. I'm thankful for every tip I can get. 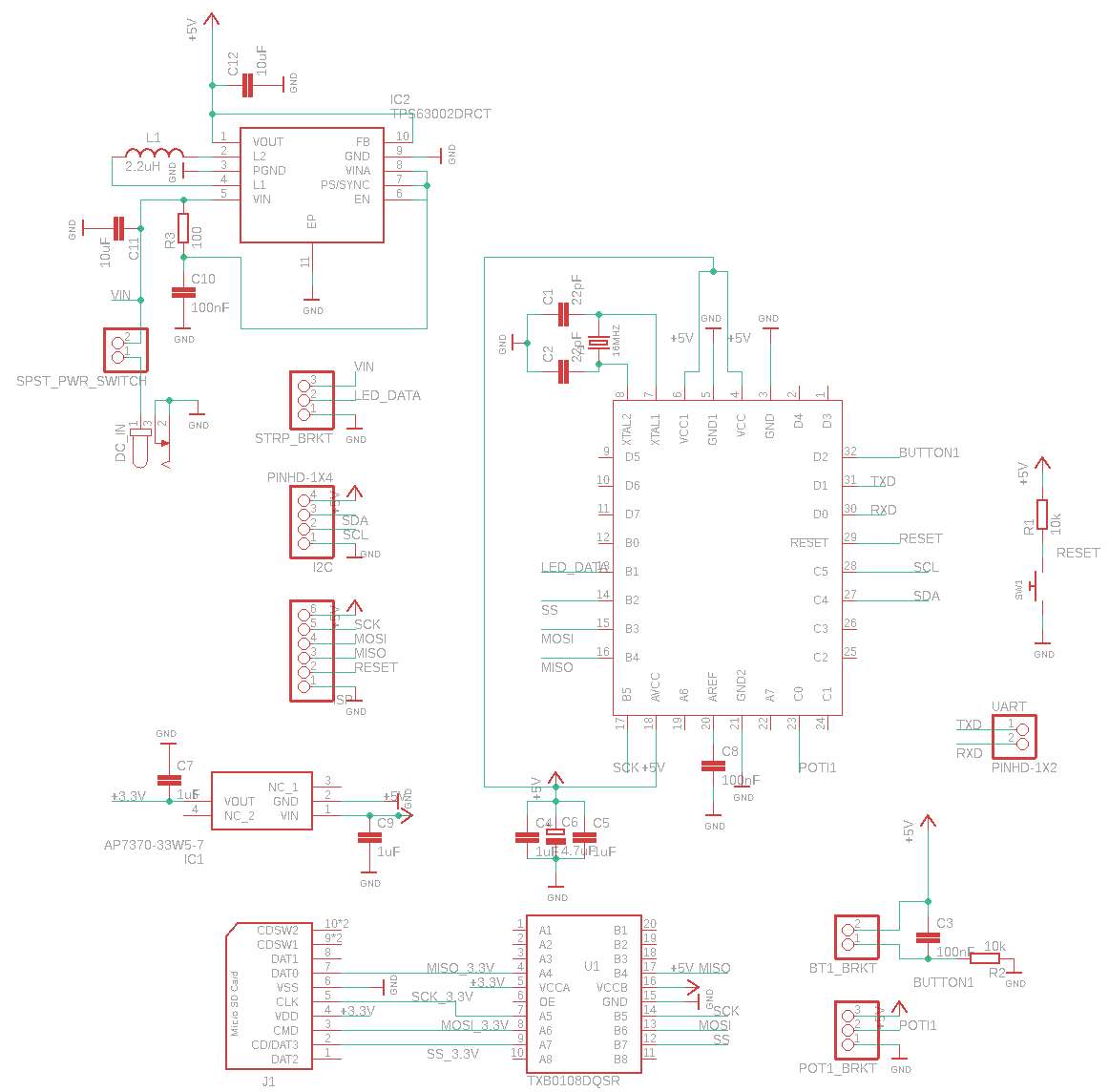 Not bad for a first try!

The rest looks good to me, no guarantees though as always. Just build and test it. If your VIN stays between 4.5 and 5.5V the WS2812 should be happy.

Not the answer you're looking for? Browse other questions tagged microcontroller schematics led-strip sd or ask your own question.

3
Is it normal for a micro SD card to have higher write speed for the first blocks?
14
How can V-USB screw up the built-in SPI of an ATmega328p?
4
Microcontroller requirements for TFT display
1
Powering 3.3v-5V LED strip with 18650 batteries
0
Level shifting between SD Card and Lipo-powered microcontroller
3
Short Circuit Protection of High speed Data lines
1
SD card via SPI: pull-up resistors or dedicated IC?
0
Review this solar-powered weather station schematic?