The image below shows how a Filterless Class-D amplifier works:

The way I understand it: Vout(minus) is just the mirror image of the Vout(plus) but there was a certain phase shift(time delay?) between them that when these two signals are taken as input to a comparator, the Vout(diff) will be the result.

How much of what I said is wrong? Im confused on how this amplifier knows how much degree of time delay there is between Vout+ and Vout- so that the Vout(diff) will SURELY be high when Vin is at the upper half of sine wave and low when Vin is at the lower half of sine wave. I thought that if the input frequency is changed, there will be some kind of overlap between Vout+ and Vout-.

Class-D means using some sort of PWM. What you're showing is just the way the waveforms of a switching bridge looks like, and, in particular, a three-level-PWM (see the 2nd picture in the answer for an example): Vout+ in your picture would be V(x) in the linked example, and Vout- would be V(y). Their difference gives the blue trace in your picture, and V(x,y) as seen in the simulation. What you refer to as "time delay" is the effect of applying such modulation (the two branches are switching differently). In the linked example there is also the source for an LTspice schematic, feel free to use it if you can and are willing.

Since you're also linking an audio class-D amplifier, then you should know that the vast majority of loads for such amplifiers are electrodynamic loudspeakers which, at their bare minimum, have an inductance and a resistance in series (it's more complicated). Driving such a load with a switching signal will bring up noise, cause unnecessary heating (besides increased EMI), but mostly it will cause more distortions which, since it's audio, are not wanted. Even if the switching frequency is greater than the maximum audio frequency (usually 10 times, or more), there are harmonics that are not wanted and, in the case of high-range tweeters, they can be damaging.

This is why, usually, there is a filter at the output of such amplifiers, to attenuate higher frequencies and leave the audio signal, as much as possible. However, these filters are, again, usually, made of inductors and capacitors, and their size and cost is not cheap, so for some cases -- notably woofers and subwoofers -- the filter can be eliminated. The reasoning is that:

If the class D is a full bridge type as shown below, then the voltage applied to the speaker is simply Vch1 - Vch2 because the speaker is connected between these outputs. Note that a filterless class D wouldn't have the LC filter connected across the speaker. 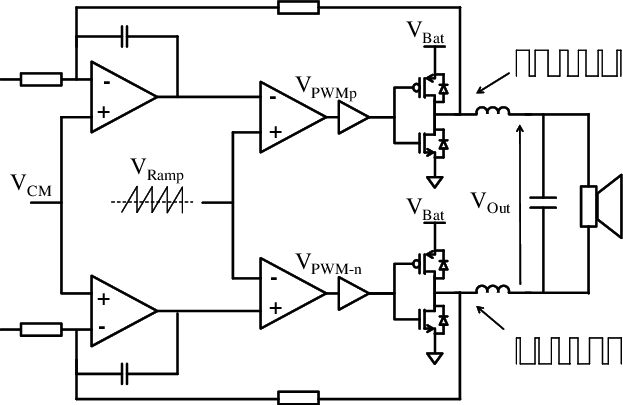 5
How to fix this LTspice error

1
Trade offs between adc range and amplifier gain design
0
Can we use a power amplifier (Class AB) in the inverter portion of a VFD?
1
Common Emitter Amplifier Problem (Incredibly lower Gain than input, and Distorted)
4
A question about understanding a BJT differential amplifier?
6
Understanding class A amplifier waveforms
3
Class A Amplifier Design: Emitter Resistance Voltage Drop
0
How to calculate error amplifier output in amplifiers
2
Why does the positive wave of my class AB amplifier output get clipped far below rail voltage?
0
Stability analysis of cross-coupled amplifier in Cadence
3
Class E Amplifier Overshooting