My son and I are working on his school project. He wants to examine the effect of temperature on battery performance (longevity). He thought he could just put an LED on a battery and watch. We soon discovered that there is more complexity than we would have thought.

First we just put a lead from the LED on each side of an AA 1.5 v battery. Nothing happened. Then we tried two AA in series and the LED came on and promptly blew. Then we put each side of a LED on a CR2032 3v lithium battery and all worked well. It worked too well. More than 24 hours later the light was not dim. We then set up a breadboard with a vibrating motor in series with the LED. The LED went out after about 60 seconds and the motor kept on spinning but slower than it had at first. Now I have set up the LED in series with a 1000 ohm resistor (I think). Will the LED light go out any sooner or will it just burn dimmer for longer? 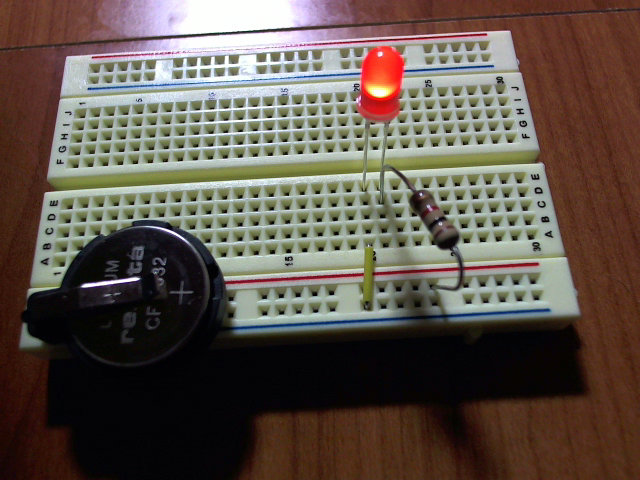 I have thought of getting incandescent bulbs or simple old-fashioned flashlights.

We want to setup the circuit in three temperatures and replicate the observations 3 times.

It'll just burn dimmer for longer that way. What you need to do is pull more current out of it. First I would get a cheap voltmeter you can probably find one for $15 or less. Then if you look at this datasheet for an energizer AAA battery you'll see they have a discharge chart in there. 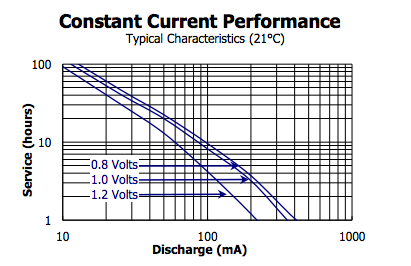 So if you want to kill a battery in less than 10 hours you'll need to suck out around 100mA of constant current. Starting at 1.5V that would mean you'd need about a 15 Ohm resistor. It'll need to be able to dissipate that power so P = 15Ohms * 100mA^2 is about 150mW of power. So look for a 15 Ohm quater watt resistor. As the voltage goes down so will the current draw but that should be fine for this experiment. Just take a voltage measurement every hour or after 10 hours, it's up to you to decide what voltage will mean it's "dead". Don't just short the battery though that could be dangerous.

If you want to do the LED thing because it looks more exciting :) You just need to pick a lower resistor value and maybe a higher power or more LEDs in parallel (with current limiting resistors). The reason you blew the LED the first time was you pushed too much current through it, and the reason it didn't work with one Battery is because there's a voltage called the forward voltage for the LED that must be met before current will flow. You can find it in the LED's datasheet along with the max current the LED can use and use that to calculate the lowest value of current limiting resistor you can use.

Here's another helpful chart for you to use from that datasheet. 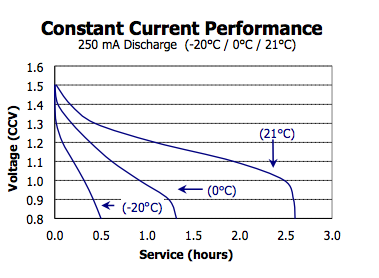 That gives you and idea of what to expect will happen to the battery over temperature.

A typical LED needs around 2 volts to light but it also needs a means of limiting the current. When you put one AA battery (1.5 volts) in series with the LED, the voltage was below the LED turn on voltage and nothing happened. When you put two AA batteries in series (3 volts) with the LED, it lit up but there was nothing to limit the current (other than the internal resistance of batteries which is very low) and hence it blew. With a 3 volt lithium battery, there is enough voltage to turn on the LED but since the lithium battery has a higher internal resistance, the LED current did not reach the burn-out level. With a 1000 ohm resistor in series, the current is much less, the LED will glow dimmer, and it will last much longer. If you had a voltmeter to measure the battery voltage over time (say every hour), you would be able to get a much better picture of battery performance. Plotting a graph of voltage vs time at different temperatures would make a good presentation. You don't even have to wait for the battery to be depleted to see a difference. Voltmeters can be purchased for only a few dollars so I recommend this approach as it is much more quantitative than just observing the brightness of an LED.

Battries capacity is defined by mAH so basicly a 1000mAH (mAH = milliamp hours) battery. To figure out the amount of run time you have you need to divide the amount of current your system draws with the capacity of the battery. For example if your LED with its series resistor draws 10mA, than the battery will run for 1000mAH/10mA = 100Hours.

If you increase the current draw by either lessening the series resistance, or putting a resistor in parallal than your run time will adjust accordingly.

Not the answer you're looking for? Browse other questions tagged led batteries resistors or ask your own question.

5
Will these LEDs work for throwies?
24
LED and lamp in series - why does the bulb not light?
0
Led circuit problem
1
Customized torch/flash light using a perfboard with an attiny
0
Some help with 9V Longlife VARTA batteries?
4
LED lamps keep glowing when dimmer is turned off
1
How to measure Alkaline battery lifetime/capacity in practice LED circuit?
0
Can I use 2 CR2032 batteries to power an EL light strip normally powered by 2 AA batteries?