My understanding of how this works is quite poor, I've tried reading many sources but just got even more confused by the terms crystals, crystal resonators, ceramic resonators, oscillators, crystal oscillators.

What I know is that when you have a simple 2 pin crystal you add 2 caps to it so that it resonates properly. And the AVR chip I am connecting it too (Atmega328p) has some other internal circuitry for it to work.

I am looking at using an smd crystal in my design and my question is, for a crystal like this: 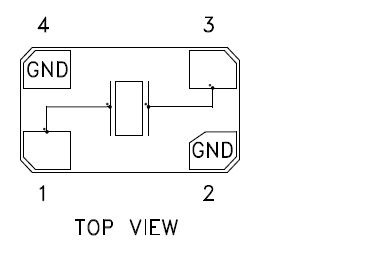 Do I still need the external capacitors or not? I originally thought I would but looking at the specs of the parts they all have a label "capacitance". Does that imply it has caps inside? Or is that recommended value for my caps? Or is that some other capacitance?

Sorry if this doesn't make sense I am just really confused. Thanks in advance!

Edit to include specifics: I have these crystals https://lcsc.com/product-detail/SMD-Crystal-Resonators_Seiko-Epson-X1E000021011900_C89371.html But it seems they are quite standard so here is one with English datasheet: https://www.mouser.co.uk/ProductDetail/ECS/ECS-160-12-37B-CTN-TR?qs=sGAEpiMZZMukHu%252BjC5l7Yb4vS8HZNl%252BL%2F78jMNI6Q2E%3D

These parts are crystals that can be used with typical microcontrollers that have a built-in Pierce oscillator, and thus require the rated external load capacitance in order to oscillate at the rated frequency.

So yes, external capacitors are needed as usual for crystals. The extra two pins are just to ground the metal lid.

Not the answer you're looking for? Browse other questions tagged oscillator capacitance crystal or ask your own question.

41
How does a Crystal work?
8
When do we need an external crystal for an Atmega chip?
3
Choosing crystal, strangely narrow requirements in MCU datasheet?
0
Do I need external capacitors for this SMD Crystal?
3
RTC chip not happy with xtal waveform
2
Rectifying failed MCU crystal oscillator design
1
Can I leave XTAL2 floating when using an oscillator chip with 1 output and no input?
6
Why do crystals have 0° phase shift at series resonance?
0
CMOS active crystal oscillator load capacitance, to be used for PLL reference
0
External load capacitors on 32.768 kHz crystal oscillators