555 timer not working in monostable mode

I am a newbie electronics learner and trying my hands on 555 timer to get it running in the monostable mode. Am trying the circuit as in the attached diagram. I am just unable to get the LED blink. I have tried the following troubleshooting steps:

Given the reputation of the 555 timers and their proven history, most likely I am doing something wrong here. Can some one please suggest what could be missing? Ignore the spiral at the bottom of the picture, my two year old is learning with me how to draw electronic circuits. 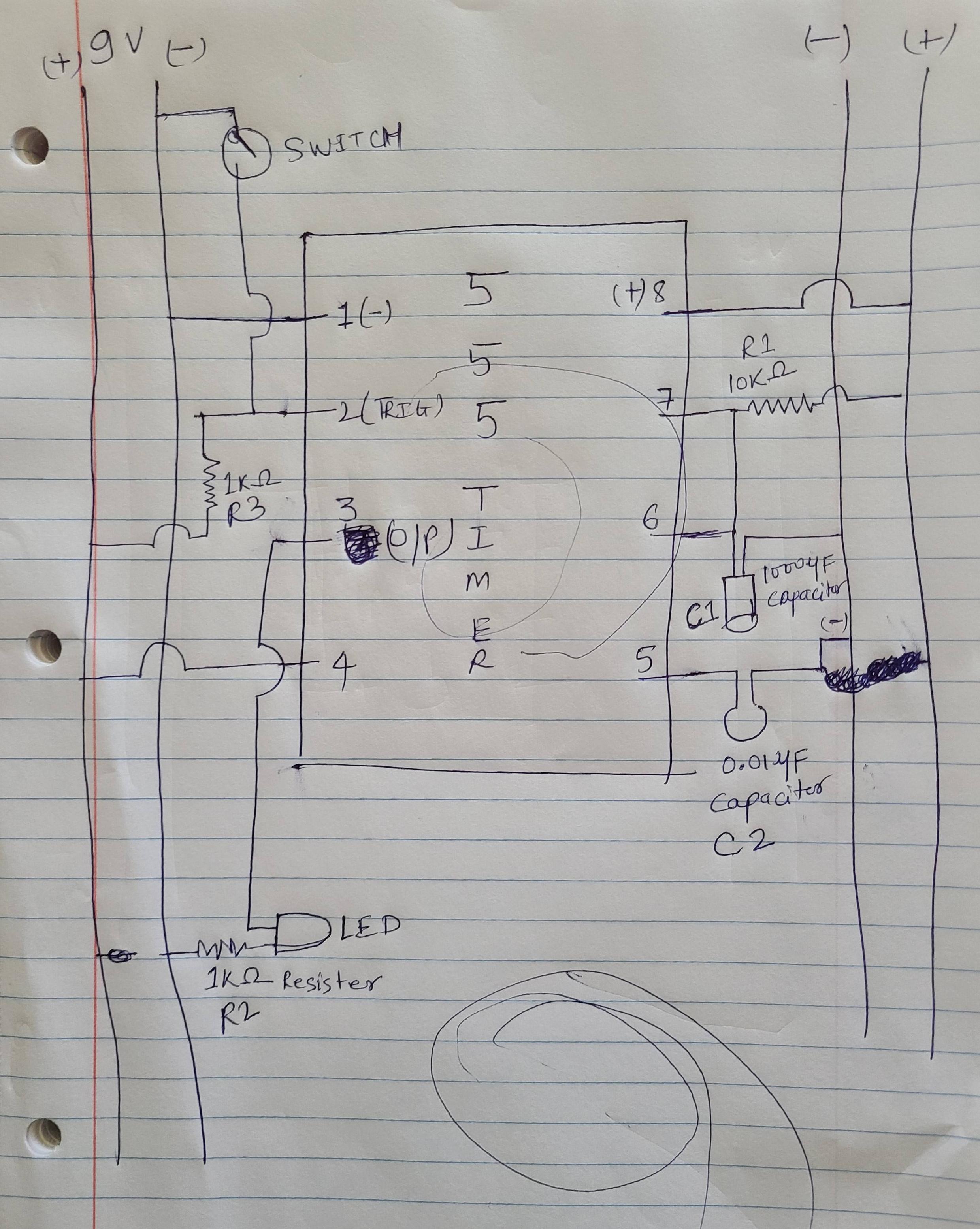 Adding the pictures of my setup on breadboard. Battery is 9V, R1 - the resistor on PIN 7 is 96 K Ohms and the cylindrical capacitor is 1000 micro farads. There are 3 LEDs on the board. The two lighted LEDs on the power rails show that both the rails have power. The third one, connected to the output, has its negative terminal connected to ground power rail and positive terminal connected to pin 3 (output) of the timer for pulse. This LED is OFF in pictures and is not getting getting ON; but I have successfully tested it before and after taking the pictures; so it's a working LED. You can also see some other 555 timers at the bottom which I am trying alternatively.

I have tried it two ways.

Picture 1 and 2 (zoomed) show the setup where I am using a button to trigger the pin 2 of the timer.

Picture 3 shows the second way where instead of using a button, I am manually inserting the grey wire on pin 2 into the negative power rail for a brief time period to create the trigger.

Picture 4 just shows that the cylindrical capacitor's negative terminal is connected to the negative power rail. 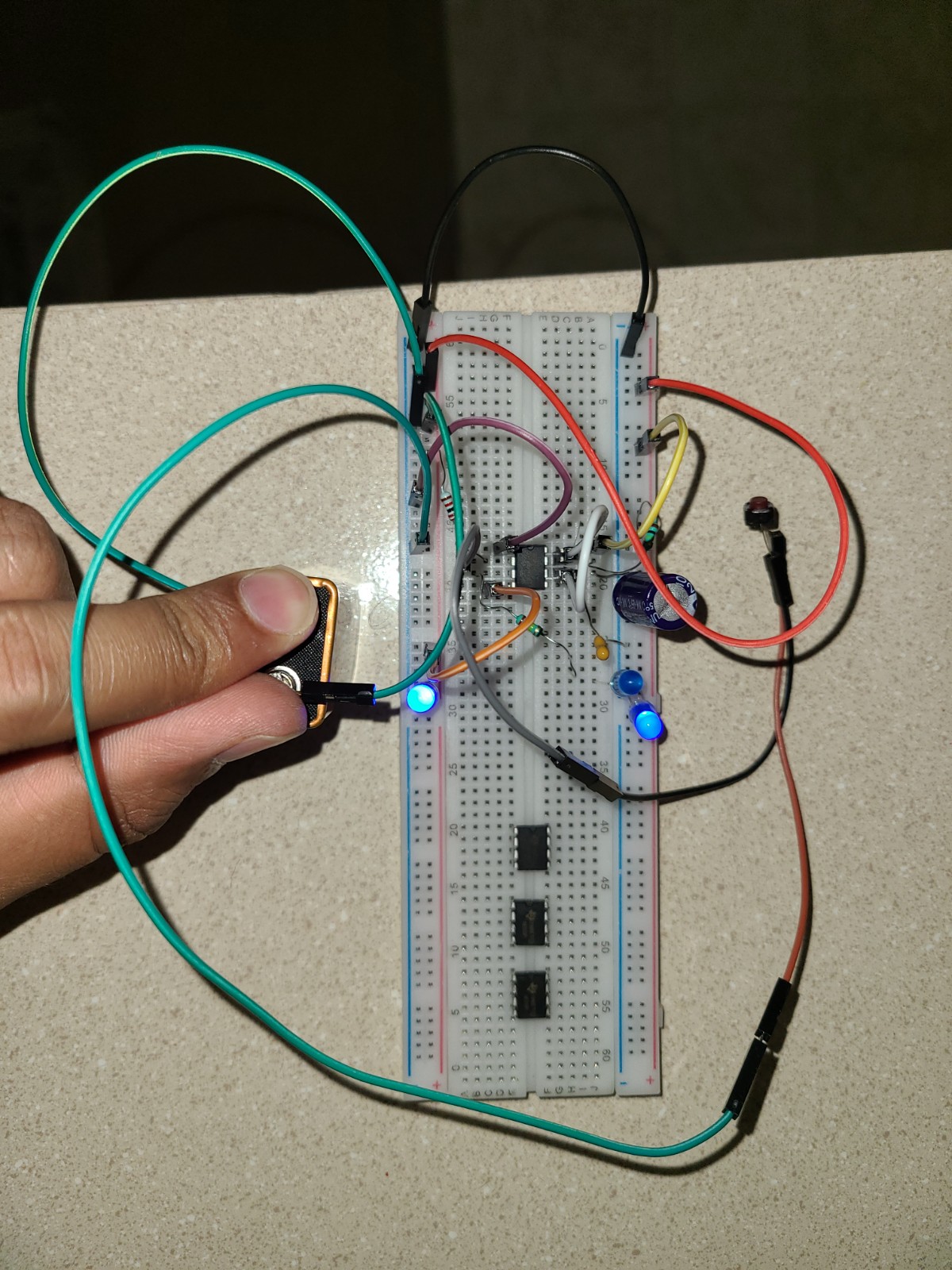 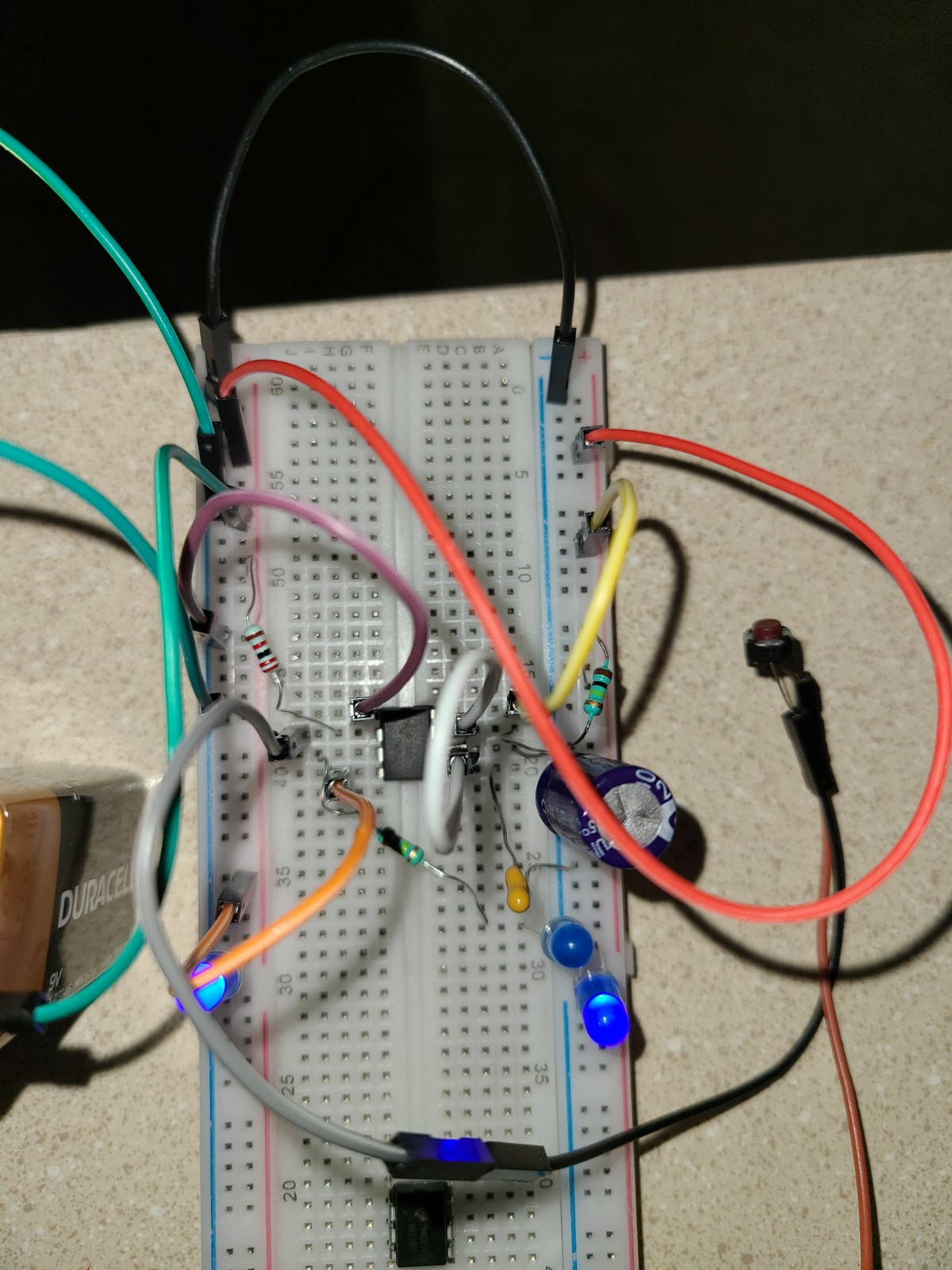 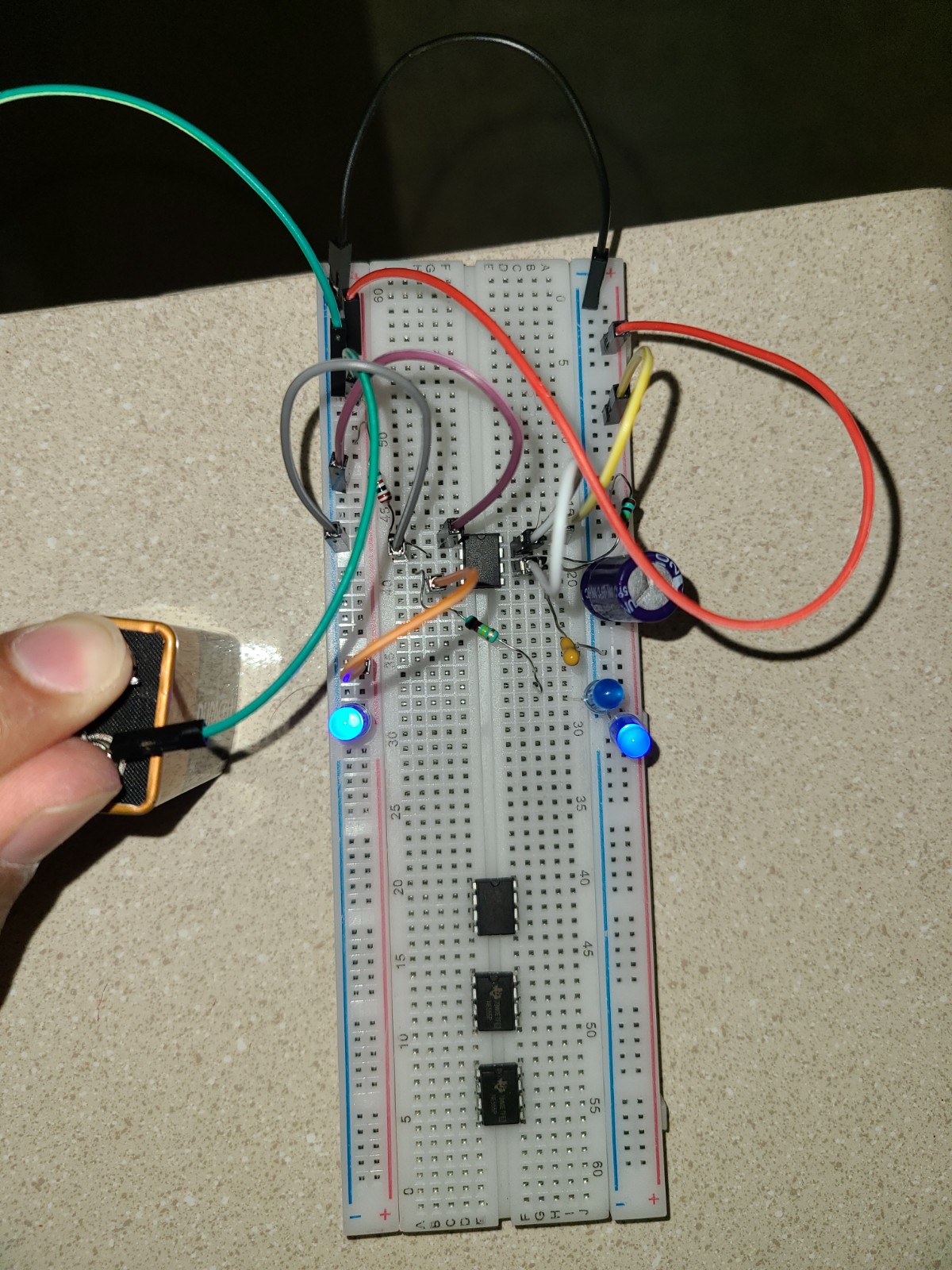 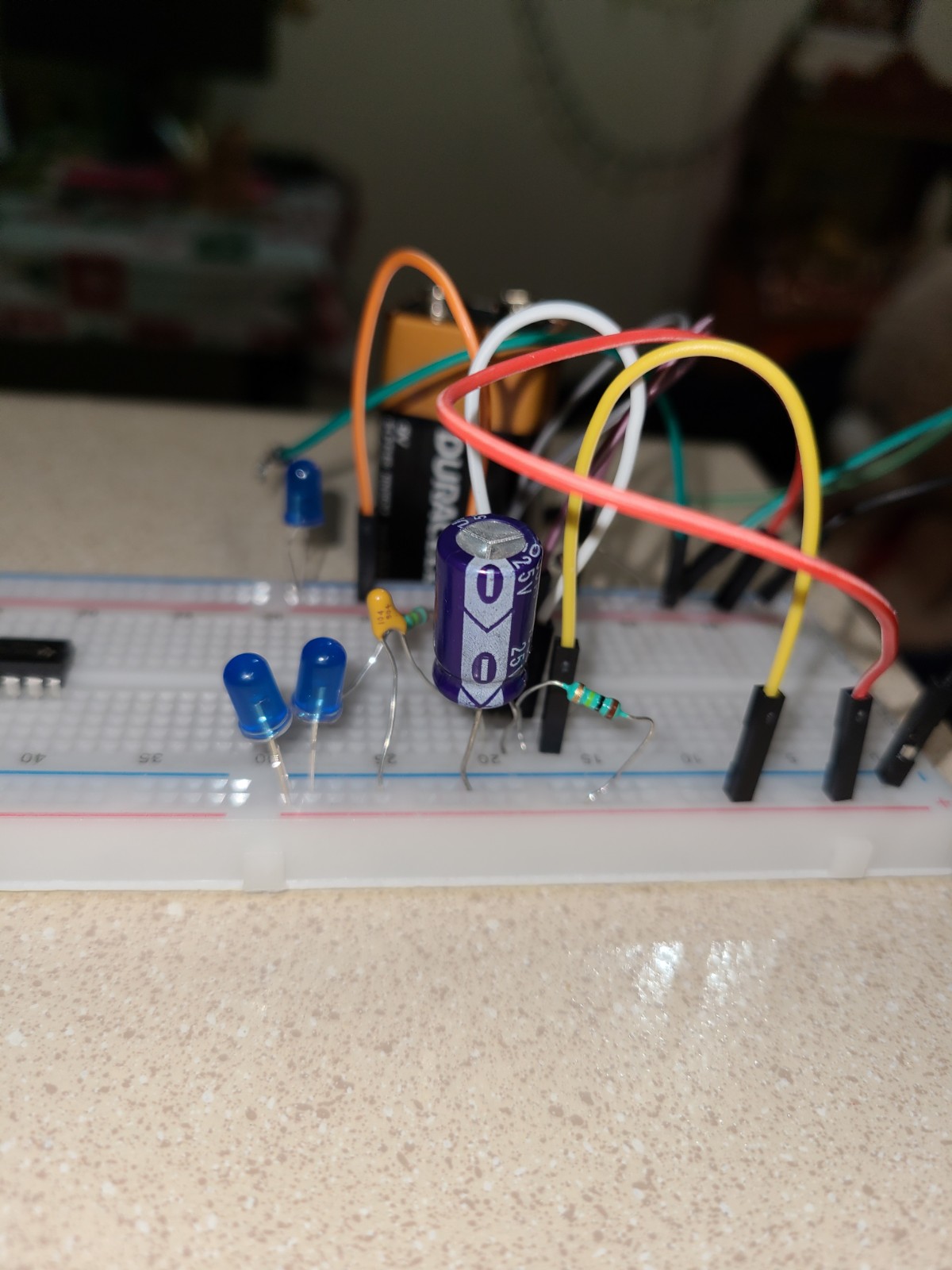 It appears that you have additional LEDs connected directly across the power rails without series resistors. These are dragging down the supply voltage to the point where the voltage at the output of the 555 is no longer sufficient to light its LED.

Get rid of those extra LEDs, or give them some series resistors too.

Not the answer you're looking for? Browse other questions tagged integrated-circuit timer 555 monostable or ask your own question.

1
555 Timer Triggering Too Easily
0
556 dual timer circuit not clear to me
2
NE555 timer not working - how to identify the element at fault?
0
555 Timer Monostable Mode Self Triggering
2
555 timer circuit error
0
555 Timer in monostable mode with reset on the same momentary button
0
How to make 555 timer output fall
1
Simulated 555 timer not working
1
Power-on delay with 555 Timer
0
555 timer won't trigger monostable mode unless I add a switch between R12 and ground?