Some weeks ago, I bought a new pair of AAA rechargeable batteries, Ni-MH. Its package shows "Panasonic eneloop" model with up to 800mAh.

First I connected them in series and connected two resistors of 10 ohms in parallel to the series of batteries, the voltage measured was 2.2V with around 440mA of load connected. Then I left this working for 80 minutes, and the voltage after this period was 1.36V (they did not heat). Then I disconnected the resistor loads, and the open circuit voltage increased to 1.7V and it began to increase from mV to mV and reached 2.24V after some minutes.

I waited more minutes again with no load on the AAA batteries, the voltage of them was at 2.55V after this. Then I used this high-side current source, of around 350mA, to recharge them, in series also (they were with almost the same individual voltages at this point). 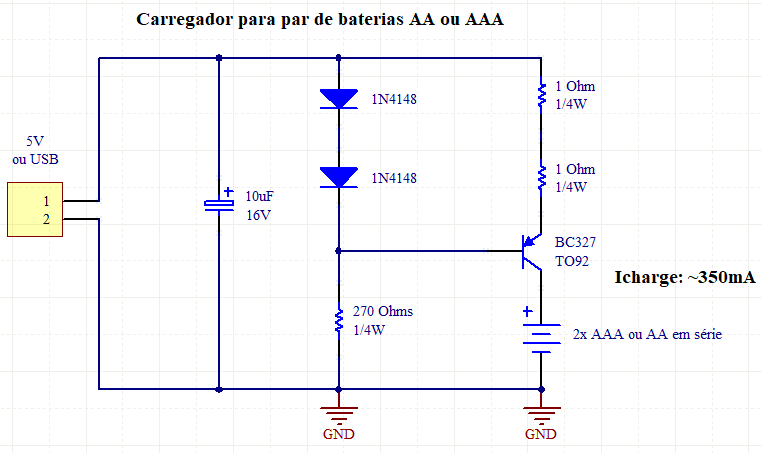 Then I disconnected the batteries from the charger, waited around 10 minutes, and measured them without load again, measured 2.77V.

Have I over-charged them? What series voltage is to be expected to reach when they are almost full of charge? It should be a lower or higher final of charge voltage (<3V or >3V)?

Other: Which voltage should I consider if I want a single value for Ni-MH and Ni-CD chemestries?

It sounds like you completely discharged them, then charged them at 350 mA for less than 2 hours. I doubt you over-charged them. To be sure, you can measure the capacity after you fully charge them. If the capacity is similar to original (or similar to rated) then they are probably OK.

With NiMH batteries, charging does not rely on voltage thresholds for end of charge. The charging is terminated using either dV/dt or DT/dt criteria. In other words, the slope of the voltage change is observed during charge at constant current, or the slope of the temperature change is observed during charging at constant current. The charge rate should be at least C/3 in order to generate a strong dV/dt signal. C/2 is better.

I will let you search the details yourself as you seem to be quite resourceful and are proceeding on the right track.

In order to accommodate both AA and AAA, you will need to select different charge rates. AAA will want to be charged at 350 or 500mA. AA should be charged at the highest practical rate. At least 700mA. If you cannot do this automatically, then the user should do it with a switch or something.

For NiCd and NiMH, there is not a clear and universal "charging end voltage"; the end voltage depends, among other things, on temperature and charge rate. They should really be charged using dV/dt or dT/dt detection, or both.

Charging them very slowly at under C/10 (even less for NiMH) with a timer can work without a proper end-of-charge detection, but it is, well, slow.

Especially NiMH doesn't like overcharging, so you may well have overcharged them, depending on the charge they had when you started charging. Then again, C/2.3 for 80 minutes, you have probably escaped battery failure.

You were charging them at about C/2.2 which is by no means out of the ordinary. Like ocrdu said, the best way to determine end of charge is to look for the slight drop in cell voltage (while holding charge current constant) at around 100% capacity. Without knowing if this happened, it's hard to tell whether you overcharged them or not since at that charging rate the voltage levels off at about 1.5V at full charge.

As far as making a multi-chemistry charger, why reinvent the wheel? A MAX712 can automatically detect when the cell voltage levels off and transition to a C/16 trickle charge and it's not that much more complicated than the circuit you have right now. Plus, you don't have to worry about compensating for temperature or charge rate or battery chemistry.

Your cells should be undamaged.

NimH cells have endpoint voltages of around 1.4 - 1.5V, depending on the charge rate.

I built a charging system for NimH in an environment where it was not possible to use any of the more usual methods (negative voltage inflection when charged, increased rate of temperature changed when charged, absolute temperature when charged, timed cutoff).
I used end point voltage.
The product was a solar charged light. All the usual methods had aspects which made them unsuitable in this application. http:// bit.ly/SL2MINIAFRICA

I sampled all the models / brands of NimH available on our local marketplace.
(Maybe 15 or 20 different types). I was using AA cells but a similar result will apply to AAA.
Several hundred thousand products used this system.

At about C/10 charge rate an endpoint voltage of 1.45V/cell worked well overall.
At higher charge rates a higher voltage is used. Too high and the cell will "runaway" and charging will never stop. If you use too low a voltage for the charge rate charging will terminate early.

Not the answer you're looking for? Browse other questions tagged voltage battery-charging current-source or ask your own question.

0
Charging batteries in series when they are connected in parallel in the circuit
1
Testing batteries by measuring their short circuit current, why it doesn't work?
1
Charging circuit for bulk 1.2v 1200mah ni-cad batteries
3
Method for rechargeable batteries in Parallel
0
5V output on AAA Ni-Mh battery charger?
1
Do Duracell AAA batteries have internal short circuit detection?
1
Is this a float charger or trickle charger?